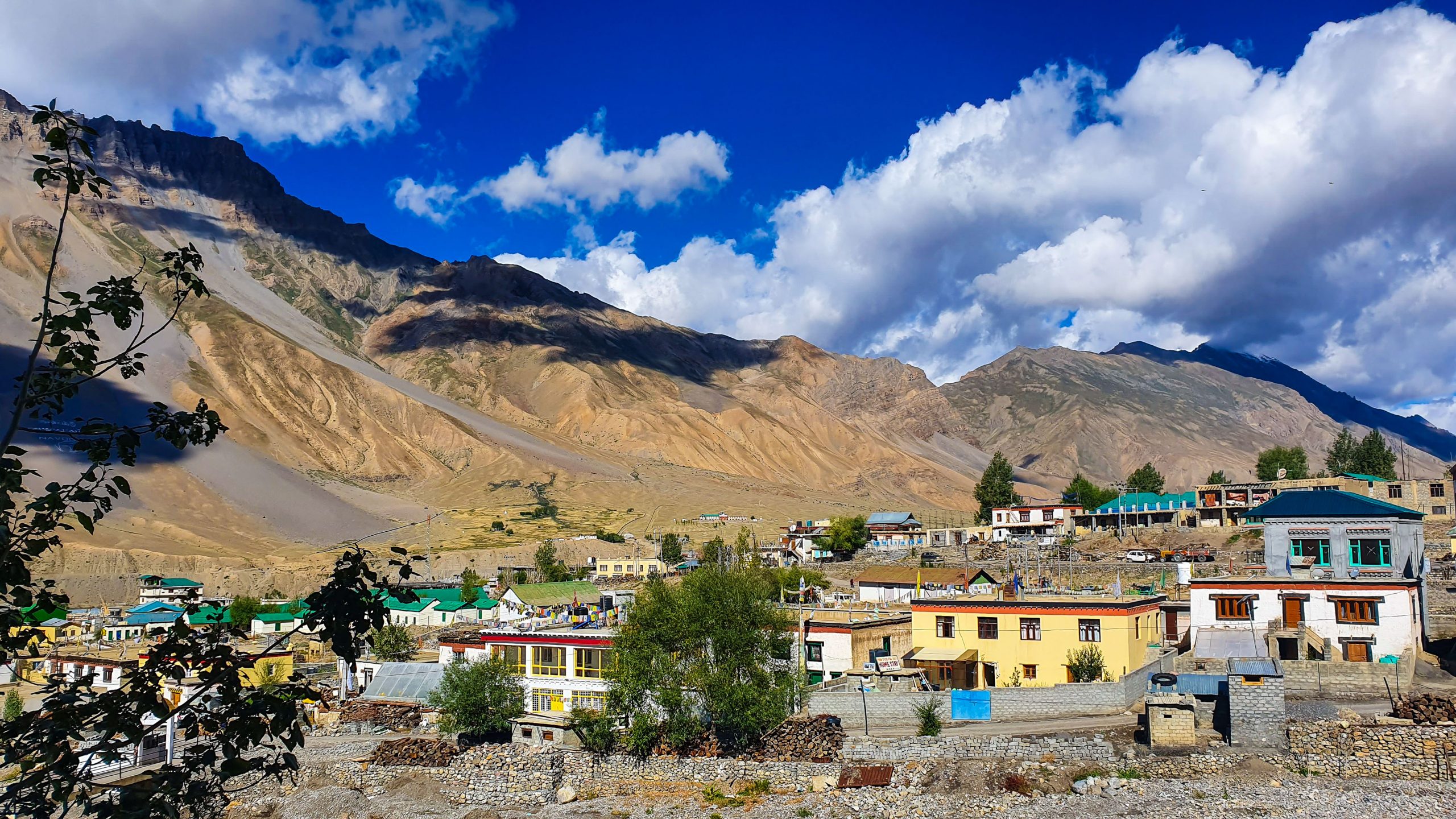 Spiti (locally pronounced ‘Piti’) or the ‘middle country, has its sub-divisional headquarters at Kaza at an altitude of 3,600 meters above sea level. Apart from the administrative offices, Kaza, Spiti valley has a marketplace, petrol pumps, hotels and medical facilities. The town is built on a series of flats that lie under the gaze of high mountains. With mountains that form a part of the middle and the greater Himalaya – several peaks cross 6000 meters – the mean elevation of Spiti is 4570 meters above sea level. Spiti’s people have divided it into four units – ‘sham’, the lower region, ‘Pin’, which lies by the Pin river, ‘bhar’, the middle tract and ‘tud’ the high territories. Kaza falls under the ‘sham’ unit of Spiti. Kaza- Spiti Valley.

Backed by a high mountain and placed on a rise that juts out of its sheer face, is the setting of the Ki (Key, Kye) gompa, in Spiti. On the left bank of the river Spiti, the Ki gompa, is regarded as the largest in the sub-division. It is a collection of rooms and a labyrinth of corridors that do not follow any defined plan, but seem to have grown over the years. Portions of the structure are three stories high, while others are lower. No definite date can be ascribed to the construction of the gompa – that acted both as a monastery and as a fort. Some scholars believe this to have been built by Dromton (1008 – 64 CE). Others differ and place its origins in later centuries, but by and large, most concur that it was built before the fifteenth century.

Past the base of the Ki monastery the road climbs up to Kibber, which at 4,205 meters above sea level was, till recently, the highest permanently inhabited village in the area accessible by road; this position has been taken by the village of Komic that is somewhat higher. The road distance between Kibber and Kaza, Spiti valley is sixteen kilometers. The village is a small one and has less than a hundred houses. This lies on top of a bare outcrop of limestone with terraced fields on the sides. There is one main street and narrow paths access the other houses as well as the couple of small basic home-stay places and hotels.

One of the most remarkable of Spiti’s monasteries is located in the village of Hikim. This is one of the two Buddhist monasteries of Spiti under the Sa-kya-pa order. Unlike the second, which is of relatively recent origin and is located in Kaza, the one at Hikim is believed to date back to at least the fourteenth century. This is also known as the Tangyud Gompa or as the Sa-kya-gong-mig Gompa and is believed to have been the place where sacred texts, the eighty-seven volumes that form a part of the Tangyur texts were revised by a team of scholars under the venerable Sa-kya lama, Ch’os –Kyi-O’d-zer in c. 1310. An interesting sidelight to this scholarly enterprise was the fear the lamas generated in wrongdoers and robbers as they were supposed to be past-masters in tantra. This castle like monastery is located at an edge of a narrow and deep valley at a strategic height and overlooks the town of Kaza, Spiti Valley – the altitude is 4,587 meters above sea level. Its immense mud walls of this monastic keep have been visually accentuated by the simple but effective device of ochre and white stripes that make the walls seem higher than they actually are. As a castle of defense, there are minimal openings at the back and the main gate opens into a courtyard. This was also one the monasteries supposedly patronized and used by the Nono, the tutelary ruler of Spiti who expectedly, had his own cell – which was located to the right of the courtyard. The little village of Hikim lies at the foot of the monastery.

Langja is at an altitude of 4,400 meters above sea level and, in a manner of speaking, this provides a window to the evolution of the entire Himalayan chain. Millions of years ago the Earth’s land mass consisted of two giant continents. There was Gondwanaland in the south and Laurasia in the north. A huge chunk of land severed itself from upper Gondwanaland and swept right across the mighty Sea of Tethys that separated them. Again, after millions of years, this giant engine crashed into the Asian continent. The force of the impact created the Himalaya mountains and the land that had pushed it ahead, is now India. Scattered all around Langja are ammonite fossils – that date back to the time when all this land was under the sea.

One of the highest villages in world and the highest permanently inhabited one in the region now to be connected by a vehicular road, the tiny hamlet of Komic is situated at an altitude of 4,275 meters above sea level. Temperatures in summer touch the high twenties (Celsius) and plummet to the minus twenties (Celsius) in winter. With a dozen or so families and little over a hundred residents, this village comes in the periphery of the Kibber Wildlife Sanctuary. The Sanctuary has animals like the ibex, blue sheep, red fox, Tibetan woolly hare, Tibetan wolf, lynx, the pika and the Tibetan wild ass; this sanctuary is also home to the rare and elusive snow leopard. Despite the altitude and the adverse climate, the villagers grow peas, some vegetables and barley in their fields and rear livestock. Komic has a double storied Buddhist monastery dedicated to Gyawa Jampa or Matreya Buddha, the Buddha of the Future.

The lake of Chandratal is at an altitude of 4,300 meters above sea level and lies in the flood plains of the river Chandra between the Kunzam and Rohtang Passes. This is perhaps the most accessible high-altitude lake in Himachal Pradesh and is about twelve kilometers north and off the Kaza – Keylong highway. The Kunzam Pass at 4551 meters above sea level is what connects the two sub-divisions of the district, Lahaul and Spiti. The pass remains closed for a substantial portion of the year.

The people in Kaza are largely Buddhists and are followers of the Geluk-pa sect. Religion plays a major role in everyday life as piles of ‘mani’ stones, prayer flags and ‘chortens’ testify. The repetition of the mantra “Om mani padme hum” (literally, behold the jewel is in the lotus ), is said to bring good fortune and wash away all sins. The valleys here are narrow – except for portions of the area near Kaza, Spriti valley, which, at places, has a width of up to three kilometers. Cultivable land is marginal and there are no trees except for a few patches of poplar and willow. Unusual plants like the seabuckthorn grow in the Kaza area.

Q. Which is the best time to visit Kaza?

A. The best time to visit Kaza is from May to September. The temperatures are very much bearable and the temperature is not frozen.

Q. How should one reach Kaza?

A. There are two routes to reach Kaza. The Manali route is open from June till December. The Shimla route is open all year round.

Q. Do the communication networks work at Kaza?

A. The communication networks work well at Kaza. Mobile phone operators like BSNL and Airtel have good network connections there. It is advised to carry a power bank as one could face some electricity shortages in Kaza.

Q. What are the things one should carry on their trip to Kaza?

A. One should carry glasses, sunscreen, and waterproof shoes. As snowy regions are wet and the water might seep into one’s shoes, one should also carry waterproof shoes. It is not necessary to carry a water bottle as the tap water can be consumed as it is straight from the Himalayas.

Q. What are the must-try foods at Kaza?

A. The hill Maggi, Thukpa and the spicy momos are the must-try foods at Kaza. The beer and whiskey made using barley are made locally.

Q. What are the health precautions one should follow on their trip to Kaza?

A. One should avoid smoking or drinking or be on drugs on their trip to Kaza. One should also carry some first aid if in the case when one travels on the bike.

Q. Which are the best places to stay near Kaza?

A. The best kind of place to stay near Kaza is homestays. There are enough hotels in the vicinity. But, to experience the true essence of the place, one needs to stay at Homestays and huts.

Q. What kind of transport facilities one should prefer while on their trip to Kaza?

A. There are a lot of private vehicles that one can hire while making their trip to Kaza. Buses ply regularly from the downhills of Himachal Pradesh to the valleys.