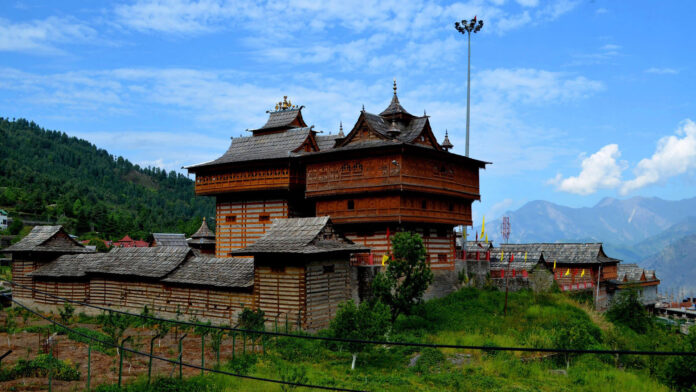 Surrounded by fields and orchards, and small villages with remarkable examples of local architecture, Sarahan is revered as one of the fifty-one Shaktipeeths – and the famous wood and stone temple of Bhimakali is a resplendent example of indigenous building skills. For several centuries this was also the seat of the former princely state of Bushair. Sarahan faces the snow-clad Shrikhand ranges which divide the valleys of the Satluj and Beas rivers and the regions of Shimla and Kullu. In this article, you have all the details about the hidden town of Sarahan.

The complex walls of the temple encase approximately an acre of land and old buildings and courtyards. The temple itself may well be considered as the most resplendent example of a style that is considered indigenous to the area. Here, along with a host of other deities are the two images of Bhimakali; one portrays her as an unmarried maiden and the second, as a mature woman.

Himachal is home to several rare breeds of pheasants. These roly-poly birds are visually stunning and have a rare plumage. The best known among these pheasants are the monal, the Khaleej, the koklas, and the great western tragopan. Till recently, the monal was also the state bird of Himachal and the role has now been taken by the great western tragopan. This bird, the tragopan ( Tragopan melanocephalus ) is locally called the ‘Juju Rana’, or the king of birds. Local lore has it that when God finished making the world, he was still not happy with what he had made.

The perfect creature had still not been created. He then took a color from every creature he had made and then brought into the world the delicately colored Great Western Tragopan. For a long time, these birds were hunted and their meat was prized – and the feathers were used to decorate clothing that varied from brooches to adornments on caps. Their habitat was also greatly encroached upon and the oak and cedar woods that support them were bordered by villages, farms, and orchards.

By the banks of the river Satluj, Rampur was the seat of the former princely state of Bushair ( Bushahr, Bushehar ). This is forty-five kilometers from Sarahan. Apart from serving as the gateway to Kinnaur, today’s Rampur is famous for its grand traditions and the Lavi fair held every November, and as the site of the huge hydro project, the Nathpa-Jakhri.

Legend has that when the town of Rampur was to be settled, three lamps were lit at different spots along the valley floor and it was at the place where the lamp remained burning through the night, that the town finally was finally built. The town may have been founded by Raja Kehri Singh in the seventeenth century or by Raja Ram Singh in the eighteenth. The rulers moved down from their traditional seats in Sarahan to the banks of the river. Bushair was one of the richest princely states in the hills and was an important center for trade between Tibet, Kinnaur, and the lower areas.

Sarahan is basically a small village centered around the Bhimakali temple complex. Getting around is easy and you can walk to most places. For longer trips, taxis and buses are available.

A. No, Spiti valley is not dangerous to visit at all. It is a beautiful valley and offers picturesque views. If you wish to do white Spiti, you could take a trip to Spiti in winter.

Q. How do I get from Kaza to Chandratal Lake?

Q. Does it rain in Spiti?

A. Yes, it rains heavily in Spiti during the months of July and September.