TABO – THE VILLAGE OF CAVEMEN AND LAMAS 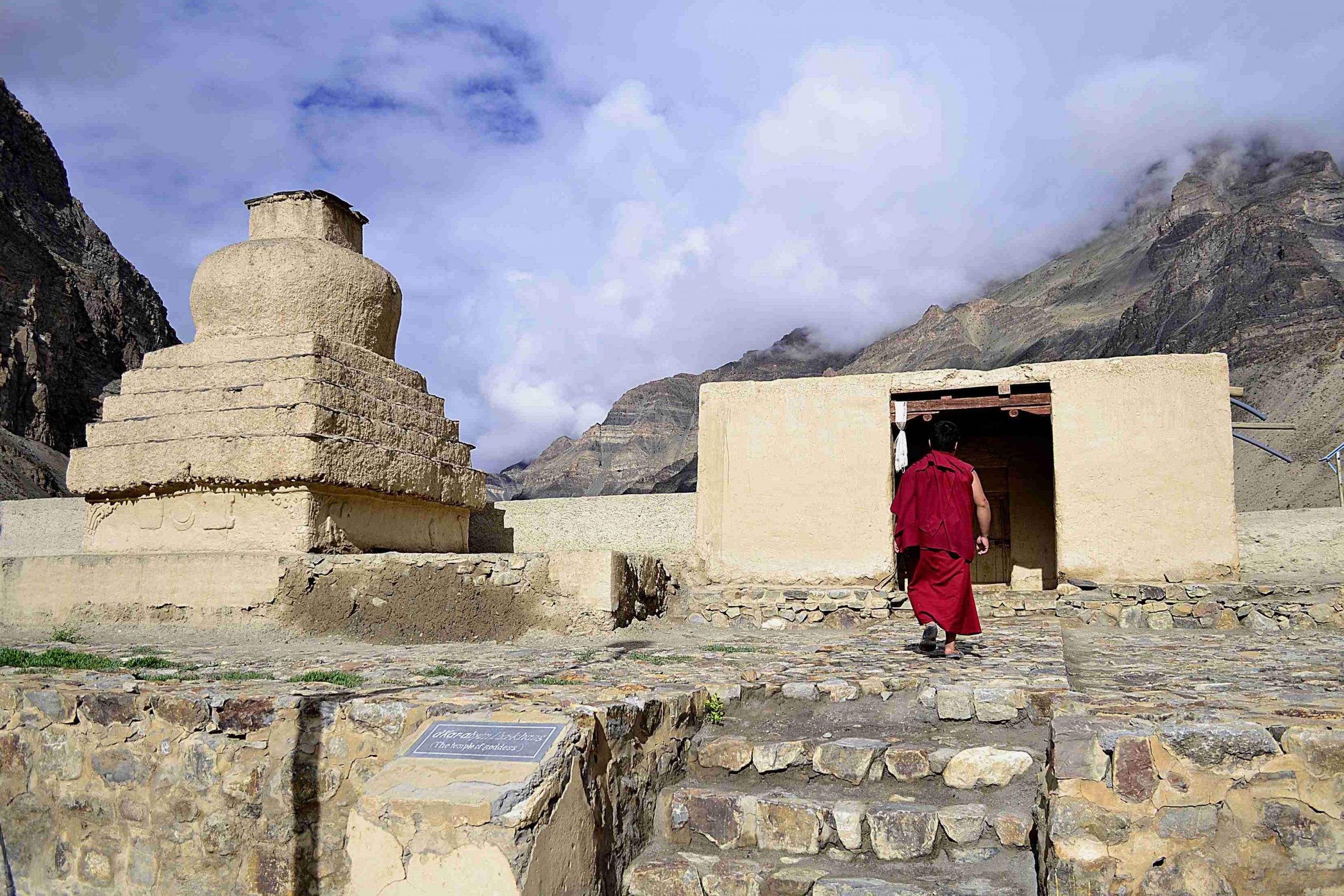 The village of Tabo has the famed Tabo monastery (also referred to as the Tabo Chos-hKhor – ‘doctrinal circle’ or ‘doctrinal enclave’). The monastery is endowed with some of the greatest art treasures in the world. A wealth of wall paintings and stucco images unfold the elaborate iconography of the region. This is a complex that holds nine temples, twenty-three chortens, a monks’ chamber, and an extension that houses a nuns’ chamber. This core is bounded by an earthen wall and encloses an area of 6,300 square meters. Just short of the complex are the contemporary monastic structures. On the sheer cliff-face above the enclave are a series of caves which were used as dwelling units by the monks and includes an ‘assembly hall’. Here again, dim traces of the paintings that once adorned the rock-face are visible. Around Tabo are some of the other important monasteries and significant places of interest. Tabo – The village of cavemen and lamas.

The primary complex at Tabo has the following temples –

1. The Temple of Enlightened Gods (gTsug Lha-khang). This is also known as the Assembly Hall (du-Khang) and is the core of the complex. This has a vestibule, an assembly hall, and a sanctum. The central figure in the assembly hall is the four-fold Vairocana. In Vajrayana Buddhism, he is regarded as one of the five spiritual sons of the Adhibuddha – who was the self-creative primordial Buddha.

2. The Golden Temple (gSer-Khang). Once said to have been layered with gold, this temple was exhaustively renovated in the sixteenth century by Senge Namgyal, ruler of Ladakh.

3. The Mystic Mandala Temple or Temple of Initiation (dKhil-hKhor-khang). This is where the initiation of monks takes place. The wall facing the door has a huge painting of Vairocana who is surrounded by the eight Bodhisattvas.

5. The Temple of Dromton (Brom-ston Lha-khang). A small portico and a long passage leading to its hall. The doorway is intricately carved and the inner walls are covered with murals. This lies on the northern edge of the complex and is regarded to have been founded by Dromton (1008-1064 CE) an important disciple of Atisha.

These five temples are accepted as the oldest ones at Tabo and the following are later additions. The Chamber of Picture Treasures (Z’al-ma), The Large Temple of Dromton (Brom-ston Lha-khang), The Mahakala Vajra-bhairava Temple (Gon-khang), and The White Temple (dKar-abyum Lha-khang) came onto being in the next phase.

Dhankar is seven kilometers from the turnoff at Schichling on the Tabo-Kaza highway. Centuries-old, Dhankar is an excellent example of how fort-monasteries were built in the area and speaks volumes for the building skills of its makers. Perched atop a series of outcrops along a spur, Dhankar has a formidable appearance as it rises tier by tier. The structures are connected, one to the other by passages cut along the rock face, sharp staircases and ladders, and narrow corridors. For a long time, this was the old capital of Spiti and the seat of the ruler, the Nono. As Spiti was placed between relatively powerful neighbors – Ladakh, Kullu, and Bushair – it was subjected to repeated attacks.

Lha-lun or Lalung lies in Spiti’s marginally explored Lingti Valley and is at an altitude of 3,658 meters above sea level. This is fourteen kilometers from the main road and is the largest village in the valley carved by the Lingti stream. The place name, Lha-lun is a derivative of two words and means ‘land or area of the gods’; this is from ‘Lha’ = deities or gods and ‘Lung’ or ‘Lun’, land or area. The mountain of Tangmar that towers over the village are said to be the residence of the primary deity and that the mountain changes color with the moods of the deity – it has a reddish hue when he is angry and a yellowish one when he is pleased. The picturesque village has around fifty houses.

It is a combination of a few very rare things that give Kungri a distinctive identity. There is, of course, the remarkable ‘high-desert and narrow-valley’ terrain that is the hallmark of Spiti. Add to this a monastery that is one of the oldest in the area, the location in the valley of the river Pin (which is a part of the Pin Valley National Park) and that this valley is the home of the wandering monks, the ‘Buzhen’ whose feats of breaking rocks with their bare hands and impaling themselves on sword points without even a nick to show for it, are legendary. The monastery at Kungri was built in the fourteenth century and is under the Nyingma-pa order of Vajrayana Buddhism (the Nyingma-pa is considered to be the oldest of the four original orders).

In 1987, the Pin Valley was declared as a National Park. This now has a core area of 675 square kilometers and a buffer zone of another 1,150 square kilometers. This is home to over twenty species of animals and birds. The highly endangered snow leopard is one – whose population is estimated at a bare dozen. Other species include the Ibex, Bharal, Red Fox, Maarten, Weasel, Snow Cock, Bearded Vulture, Chukor, Golden Eagle, Griffon, and Himalayan Chough.

Foreigners traveling to Tabo through Kinnaur require Inner Line Permits. These are issued by various authorities. The permits are issued for groups of four or more persons and the tour needs to be sponsored by a recognized travel agent.

Tabo weather is very unpredictable as it ranges from cloudy to sunny or heavy snowfall. The best time to visit Tabo would be during the summer season from May to September. The temperatures can range from -5°C at night to 20°C in day time. Most of the tourism to Tabo happens during this time when it is not very cold and the roads to Tabo are open. The hotels, restaurants, Tabo Monastery, Tabo Caves and other places to visit here remain open in summers.

Visiting Tabo in December or any other winter month would not be recommended as the roads as well as the hotels are closed after mid-december due to heavy snowfall.

How To Reach Tabo

To visit the Tabo Monastery by train, the nearest railway station is the Kalka railway station located at a distance of 452 km from Tabo. To visit Tabo Monastery by air, one can  fly to the Kullu airport which is the nearest air base located at a distance of 294 kms from Tabo. Taxis are available from the airport to Tabo which take around 5 hours to cover the distance.