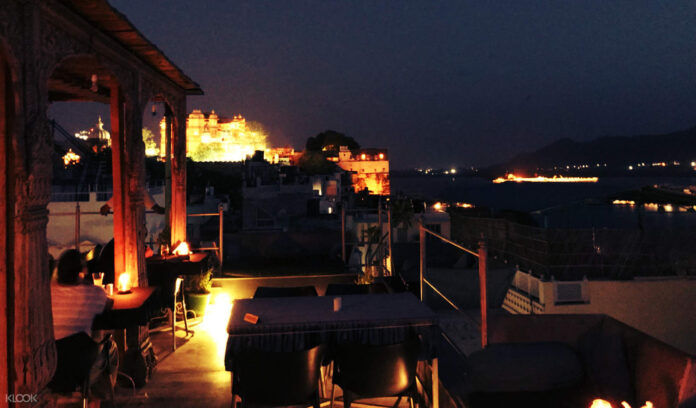 If you’re a party person, you’re likely to be disappointed by the nightlife in Udaipur. Although the city has evolved in recent years, it still doesn’t have a late-night culture or nightclubs and, as the saying goes, turns into a pumpkin by midnight. Come 11 p.m. and all of Udaipur’s bars are either closed or preparing to close, and the streets empty. Hence, you’ll need to be satisfied with a peaceful drink overlooking the lake instead of wildly dancing until dawn. The enchanting atmosphere makes up for it though! Here’s where to go.

Most of Udaipur’s bars are located in hotels, with prices based on the category of hotel. At the highest end, you can expect to pay 800 to 1,000 rupees plus tax for a drink, which is steep by Indian standards. Economical prices can be found at small standalone local establishments. However, solo females are likely to feel more comfortable sticking to upmarket and touristy places, where it’s more customary for women to be seen drinking amid men. In addition, the selection of alcohol will be broader (beyond beer, whiskey, and rum)! Some bars do have DJs and dancing on certain nights but the fun is routinely over by midnight there, too.

Restaurants in Udaipur typically remain open late, shutting at the time as bars (10:30 p.m. to 11 p.m.). There are many scenic places to dine by the lake or on hotel rooftops. Check out our pick of restaurants in Udaipur for some recommendations. Lower-end restaurants may not have alcohol licenses, so keep that in mind if you’d like to have a drink with your meal. Some touristy restaurants will sneakily serve beer on the side if you ask but confirm the price beforehand to avoid being overcharged. Sun N Moon Rooftop Cafe is a popular spot for 360-degree city views and craft beer. If you’re a traveler who’s looking to meet people, the lively rooftop cafe at Zostel backpacker hostel provides beers and banter.

Live Music and Other Shows | Nightlife in Udaipur

Watching a puppet and folk dance performance is one of the most popular things to do in Udaipur. These events are held every evening at two of Udaipur’s top museums. The times are 6 p.m. to 7 p.m. at Bharatiya Lok Kala Museum and 7 p.m. to 8 p.m. at Bagore ki Haveli (tickets on sale at the venue from 6 p.m. and sell fast).

Tips for Going Out in Udaipur

Q. What is there to do in Udaipur at night?

A – Places To Visit In Udaipur At Night

Q. Is Udaipur safe at night?

A – Safety: Udaipur is generally regarded as being extremely safe. It is advisable to avoid dimly lit areas at night.

Q. What Udaipur famous for?

A – Dubbed “the most romantic spot on the continent of India” by British administrator James Tod, Udaipur is a tourist destination and is known for its history, culture, scenic locations, and the Rajput-era palaces. It is popularly known as the “City of Lakes” because of its sophisticated lake system.

Q. How many days is enough for Udaipur?

A – Two days are more than enough to let the beauty of Udaipur envelop you. Here’re the places to eat, stay and visit once there

Q. What are the best night clubs and pubs in Udaipur?

A – Below are the best nightclubs in Udaipur

1. Tehkhana RestroBar: Easy on the pocket, Tehkahana is a fun place to be at, especially during game season. There is a massive projector screen on which you can watch sporting events with friends. But if that is not your preference, the bar still has moderately priced alcohol, musical gigs, and experiences that you can have in Udaipur at night.

2. The Winos: This one is a more sophisticated and grown-up outlet offering branded liquor, a relaxed and easy atmosphere, soothing music, and an elegant setup. Located in the Lal Bagh, the Winos is a famous retro bar where you can enjoy a more leisurely nightlife in Udaipur.

3. Brewz Rock Cafe: Head to this spot to have a banger. Dancing, music, drinks, good food, and an electrifying environment, Brewz Rock Cafe has the most fun crowd and party scene in the city, making it rank really high on the places to visit in Udaipur at night.

4. Panera Bar: Enjoy the evening views of the splendid city vistas at sunset while sipping down delicious cocktails or neat alcoholic drinks. The Panera Bar is an excellent place to experience the nightlife in Udaipur. You can choose to sit at the poolside or indoor and let the night sway with the cheers and laughter of friends and family.

Q. Which are the best places to do shopping in Udaipur at night?

1. Jagdish Temple Street: The market runs between 10:00 am till 8:00 pm on all days except Sunday and is among the best spots to enjoy shopping for traditional items. Leather products like shoes, diaries, wooden toys and decorations, textiles, terracotta, and metal goods are also quite the buzz here.

2. Clock Tower: Another one of the places to see in Udaipur at night is the illuminated Clock Tower Market. The place has old-world swirling lanes housing small shops and stores. Selling of gold and silver items, traditional lace bangles, embroidered poly bags, meenakari and Kundan work, and other trinkets can be brought from here between 10:30 am to 8:30 pm on all days, except Sundays.

3. Maldas Street: This is the biggest spot to buy the best of apparel and clothing materials in Udaipur. The market has the best stores and brands that sell typical Rajasthani fabrics and authentic Poshaks, among other modern outfits and artifacts. Maldas Street remains open between 10:00 am to 8:00 pm every day.

Q. Do night clubs in Udaipur-Rajasthan have an age-limit?

A – Majority night clubs allow people who are 21 years old and above.

Q. Do night clubs in Udaipur-Rajasthan have a dress-code to be followed?

A – Yes, usually nightclubs have a dress code for their guests. It is best to inquire about the nightclub you plan to visit.

Q. Should I pre-book a spot at a night club?

A – It is not necessary to pre-book a spot at a nightclub, but it is suggested you do so on weekends to void waiting.

A – This completely depends on the nightclub you choose. Some allow stag entry with a cover charge or free, while others do not. It is best to inquire beforehand.

Q. What is the entry fee at night clubs?

A – Some nightclubs often charge an entry fee in the form of cover charges. They can charge you a cover charge of approximately Rs. 1,000 or more.

Q. Where is Udaipur?

A – Udaipur, formerly the capital of the Kingdom of Mewar, is a city in the western Indian state of Rajasthan. Established in 1559 by Maharana Udai Singh II, it is situated around a series of artificial lakes and is known for its opulent royal residences.

A – Established in 1559 by Maharana Udai Singh II.

Q. Udaipur in which state?

A – Udaipur is in Rajasthan.

Q. Udaipur what to see?

A – Below are the 8 best things to see in Udaipur

Q. How far is Udaipur from Jaipur?

A – Distance between Jaipur to Udaipur by Road is 417 kms

Q. Where is Udaipur on India’s map?

Q. How many lakes are there in Udaipur?

A – It has seven lakes surrounding the city. Five major lakes, Fateh Sagar Lake, Pichola Lake, Swaroop Sagar Lake, Rangsagar, and Doodh Talai Lake, have been included under the restoration project of the National Lake Conservation Plan (NLCP) of the Government of India.

Q. How to reach Udaipur from Delhi by Train?

Q. How many days required to visit Udaipur and Mount Abu?

A – Mount Abu and Udaipur – 4 days are more than enough to cover all the must-visit places.

A – Below are the top 15 Hotels in Udaipur

Q. What is the Udaipur pin code?

Q. How old is the city palace Udaipur?

A – It was built over a period of about 400 years with the contribution of several rulers of the Mewar dynasty. Its construction began in 1553, initiated by Maharana Udai Singh II of the Sisodia Rajput family as he shifted his capital from the then Chittor to the new city of Udaipur.

Q. How is Udaipur weather?

A – Being located in the desert land of Rajasthan, the climate and weather of Udaipur is generally hot. The summer season runs from mid-March to June and touches a temperature of 38 °C.

Q. What is the average Udaipur temperature?

Q. Which are the major Udaipur palaces?

A – There are two famous palaces in the Udaipur district of Rajasthan, India – Sajjangarh Palace and the City Palace of Udaipur.

A – Below are the 8 best Places to Visit in Udaipur

Q. Which are the most visited Udaipur tourist places?

A – Below are the most visited tourist places in Udaipur

Q. What is the Mumbai to Udaipur flight options?

A – Best Flight Options are available on Cleartrip.com

Q. What is the distance from Ahmedabad to Udaipur?

A – 265 Kms is the Distance Between Ahmedabad to Udaipur

Q. What is the distance of Udaipur to Mount Abu?

A – 163 km Distance Between Udaipur to Mount Abu

Q. How is Udaipur city?

A – Udaipur, the beautiful capital of Mewar, Rajasthan, is a royal tourist destination for travelers who love history, culture, and architecture. It is quite a famous destination due to its sprawling palaces, ancient forts, beautiful lakes, lush gardens, age-old temples, romantic backdrop, and much more.

Q. What is Jodhpur to Udaipur distance?

Q. Is it expensive to live in Udaipur?

Q. Which city is better Jodhpur or Udaipur?

A – Udaipur has more to offer than Jodhpur on hilltop palaces, boating, lake view excursions, museums. It is also a day trip to the most famous Kumbhalgarh Fort. There are many affordable heritage hotels in Jodhpur. No matter which place you choose, you will get to see the view of the fort.

Q. What is the old name of Udaipur?

A – To protect Udaipur from external attacks, Rana Udai Singh built a six-kilometer-long city wall, which had seven gates, namely Surajpol, Chandpol, Udiyapol, Hathipol, Ambapole, Brahmpole, etc. The area within these walls and gates is still known as the old city or walled city.

A – Security: Udaipur is generally considered extremely safe. It is advisable to avoid dimly lit areas at night.

A – Rajasthan’s Lake City, Udaipur has been ranked as the cleanest city in the state with a population of less than 10 lakh, under the Swachh Survekshan 2020, the central government’s annual survey announced on Thursday.

Q. Is Udaipur worth visiting?

A – Udaipur is scenic and historical in itself but there are some places around it that are worth seeing. These off-road places are easily accessible from Udaipur and are great options for a day trip or for a weekend getaway.