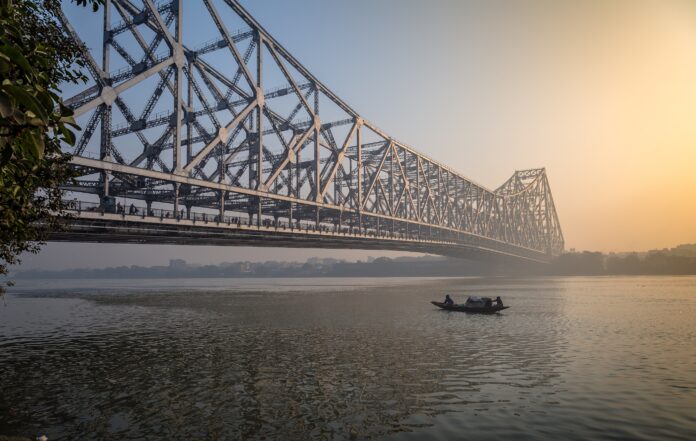 Kolkata is called the intellectual center of India. It was the capital of the country during the reign of the British, so the city has perfectly preserved monuments of colonial architecture: the Queen Victoria Memorial, St. Paul’s Cathedral, and the still operating Fort William. Right in the center of the city, there is a large green Maidan park, not far from the river embankment, and a beautiful bridge. In West Bengal, the bloody goddess Kali is especially revered, and in Calcutta, there is the main temple dedicated to her. Kolkata Places To Visit

Kolkata is the last city in India and one of the few in the world where running rickshaws have survived – taxi drivers harnessing themselves to a carriage like a horse and carrying a passenger to the address. The Indian authorities tried to ban such a business, considering it “degrading human dignity”, but the rickshaws have not abandoned this work until now.

Budget rooms can be found on Sudder Street and Chowringhi, a large shopping area and many cinemas nearby. The bars and restaurants on Sudder Street, which are open late, offer live contemporary Indian music and Bengali cuisine.

Kolkata is a convenient transport hub. Aside from the main Indian destinations, from here you can start your journey to the northeastern small states of India, sandwiched between Nepal, Tibet and Bhutan, or inexpensively fly to Southeast Asia.

British Queen Victoria also bore the title of Empress of India. This memorial is dedicated to her – a palace of white marble, towering over the crowns of trees in the park. The building was built in the Italian style with an admixture of oriental motives. Inside is a museum dedicated to the Queen as well as the British presence in India. In the huge park surrounding the memorial, you can watch a game of cricket or just take a walk.

In Calcutta, there is the main temple of the bloody goddess Kali, who is especially revered in West Bengal. It is located in the Dakshineswar region on the northern outskirts of Kolkata. From the outside, the building with domes is a bit like an Orthodox cathedral, although this is where the similarities end. They say that human sacrifice was practiced in this time not so long ago. The cult of Kali is associated with the existence until the 19th century in Calcutta of an ominous sect of thags (tugs) – stranglers, who killed their victims with the help of handkerchiefs twisted into a bundle, oiled and sprinkled with the sacred water of the Ganges. The stranglers were engaged in banal robberies and contract killings, but they did this not only for the sake of enrichment but hoped to earn the favor of the goddess of death.

The impressive white Gothic building belongs to the Church of England. Inside there are beautiful frescoes, stained glass windows, and carved antique furniture. Mighty ancient trees grow on the territory around the cathedral, a place for meditation is provided.
Services in English and Bengali are held every Sunday morning, and in November there is a church carnival with games, music, and free food.

The mighty Fort William building is situated on the eastern bank of the Hooghly River in the city of Kolkata. Built-in the year 1696, the fort is named after King William III and was the first British stronghold in the country. The magnificent structure is spread over 70.9 acres and is embellished with hundreds of arched windows that overlook the lush gardens. Meticulous stonework adorns the surface of the building and it took ten years to complete. However, it was soon realized that the building had some flaws, and a new octagonal building was constructed, the foundation of which was laid by Sir Robert Clive.

During its existence, Fort William served a number of purposes, each of which was quite the opposite of the other. Initially, it consisted of wings and an internal bastion where prisoners were carried, which is why it was called the ‘Black Hole of Calcutta’. Today, Fort William is the property of the Indian Army and has a capacity to accommodate 10,000 military personnel. It also serves as the headquarters of the Eastern Command. Due to its importance in relation to Indian intelligence, access to the interiors of the fort is limited to army personnel and their relatives. However, you can visit the palace for its splendid architecture.

Belur Math in Kolkata is the headquarters of the Ramakrishna Math and Mission. Spread over forty acres of land on the west bank of the Hooghly River, it is visited by people from all over the world irrespective of their religious beliefs.

The temple is known for its distinctive architecture, which combines Hindu, Christian, and Islamic motifs to symbolize the unity of all religions. Founded by Swami Vivekananda, the chief disciple of Ramakrishna Paramhansa, the temple is at the heart of the Ramakrishna Movement. The temple complex also houses a museum and several other affiliated educational institutions.

The evening aarti takes place at 5:30 pm, with the ringing of an evening bell to indicate that visitors are not allowed to roam the grounds of the monastery and are allowed to visit a temple other than the Sri Ramakrishna Temple. Not there. The aarti songs sung are hymns of praise to Sri Ramakrishna and Sri Sharada Devi. The aarti here is different from other places of worship as one is expected to meditate only by sitting here. No religious offerings are given. Flowers and sweets are not offered.

An iconic landmark of Kolkata, Howrah Bridge is a massive steel bridge built over the Hooghly River. It is considered one of the longest cantilever bridges in the world. Also known as Rabindra Setu, it connects Howrah and Kolkata. It carries the daily traffic of over 100,000 vehicles and countless pedestrians and is as historic as it is grand. However, the grandeur of the bridge comes alive at night as it is fully lit. You can also take a ferry ride while running between Kolkata and Howrah from Launch Ghat. The view of the city from the ferry is priceless, to say the least, especially at night.

The Howrah Bridge was the third-longest cantilever bridge at the time of its construction but is now the sixth-longest of its type. It was renamed Rabindra Setu on 14 June 1965 after Nobel laureate Rabindranath Tagore. It spans about 1500 feet on the Hooghly River and is 71 feet wide. Strand Road has a total of 8 lanes for bicycles and pedestrians. What makes this bridge unique is that it was built without a single nut or bolt and is held together by rivets.

A visit to the Birla Planetarium is an exciting way to ignite your interest in science and planetary motion. People, especially astronomy lovers, come from all over the world to experience the wonderful shows organized here. A trip here includes a tour of the planets, where interesting details about them and other fascinating celestial bodies in our universe are discussed. When the show goes on, the silence is loud, which in itself is a testament to the mesmerizing effect of the show here. Portraits of famous astronauts and other celestial bodies are displayed in the hallway. After attending the show, one can have a look at them.

The ninth oldest museum in the world and the largest in India, the Indian Museum is located in the city of Anand – Kolkata. The foundation stone of the Indian Museum was laid in the year 1814 and since then it has been a center of multidisciplinary activities. Popularly known as the ‘Jadughar’, it houses a fine collection of contemporary paintings, sacred relics of Buddha, Egyptian mummies, and ancient sculptures. Apart from these, the Indian Museum houses some of the most exquisite collections of jewelry, fossils, skeletons, antiquities, armor, and stunning Mughal paintings.

Presently, the museum has 35 galleries divided into six categories namely Art, Archaeology, Anthropology, Geology, Zoology, and Economic Botany. A library and bookstore are also present within the museum complex for those curious about history. The Indian Museum recently celebrated its bicentenary anniversary in February 2014 with great enthusiasm. With its splendid collection, the museum takes you back in time to explore our fascinating past.

Q. Kolkata is in which state?

A – Kolkata, in Bengali Kalikata, formerly Calcutta, city, capital of the state of West Bengal and former capital of British India (1772–1911). It is one of the largest cities in India and one of its major ports.

Q. Where is Kolkata?

A – Kolkata is in West Bengal.

Q. What is the old name of kolkata?

A – The city’s former name, Calcutta, is the English version of the Bengali name Calcutta. According to some, Kalikata is derived from the Bengali word Kalikshetra, which means “the land of (goddess) Kali.” Some say that the city’s name derives from the place of its original settlement on the banks of a canal (Khal).

Q. How many airports are in Kolkata?

Q. Why Kolkata is called city of joy?

A – The city has earned the nickname ‘City of Joy’ for its soulful embodiment of culture, love, mystery, respect, excitement and of course some wonderful sweet treats. Kolkata, as it is now called, is a city that strikes a perfect juxtaposition between the old world and the modern world.

Q. What is famous in Kolkata?

A – Below are the things which are famous in Kolkata

Q. What is the famous food of Kolkata?

A – Macher Jhol is the most popular food in Kolkata and is usually eaten with rice. It can be found in any restaurant in the city as it is the staple food of the people.

Q. Which are the best hotels in Kolkata?

Q. Which street food is famous in Kolkata?

A – One of the most popular food in Kolkata, Dakre Street, also known as Decker Lane, has everything you would want to try. From Punjabi to Chinese and trade mark Bengali cuisine, you will find it all here. Chowmein, Schezwan Chicken, Luchi-Alu Dom, Fish Roll, Ghugni, Puchkas, Jhali Muri and the list goes on.

Q. Which language is spoken in Kolkata India?

A – According to the Kolkata Municipal Corporation official website, the majority of the population of Kolkata speaks Bengali, which is the official language of Kolkata.

Q. Which is the famous sweet of Kolkata?

A – One of the most famous Bengali sweets, Roshogulla is a soft round dessert made with chhena and dipped in a sugar syrup. Rajbhog is a close cousin of this famous sweet, with a savory stuffing at its center which can be made from dry fruits, saffron, cardamom etc.

Q. Is it Safe to Travel to Kolkata?

A – Although Kolkata is generally considered a safe city, there are more dangerous and less dangerous areas. You must be alert at all times while spending time in Kolkata.

Q. Is Kolkata worth visiting?

A – From the stunning colonial-era Victoria Memorial to the ever-busy Howrah Bridge, Kolkata’s architecture will undoubtedly impress. With a variety of historic churches, synagogues, temples, old havelis and colonial buildings, Kolkata’s structures exude old-world charm unlike few other cities.

Q. What are the best months to travel to Kolkata?

A – A cool, comfortable Kolkata winter (December to February) arrival in December or January, the best months to visit Kolkata. At this time of year, the temperate falls to 11 °C and the maximum stays between 26 and 27 °C.

Q. Does Kolkata have a beach?

Q. How many days do you need in Kolkata?

A – You need at least 2 full days to cover Kolkata. Spend the first day exploring central and south Kolkata, and the second visiting places to visit in the north, for which you must hire a car and driver. Begin by catching a taxi to the south of Kalighat Kali, the city’s most famous temple.