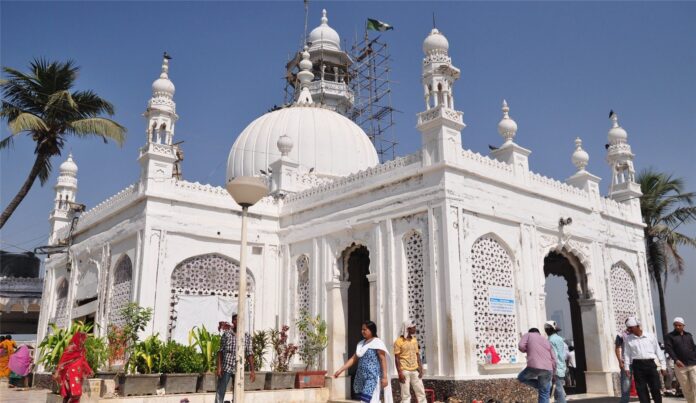 A mosque was constructed in the midst of a thin mosque, which brings devotees to the dargah, the Haji Ali dargah is situated in 500 yards of water and one can only access it in small flows. It is definitely one of the most popular Islamic sites deployed in the southern part of Mumbai. It was built by a prosperous Muslim businessman, who later emerged as a sage named Haji Ali Shah Bukhari. A Mosque of Faith Haji Ali Dargah.

A beautiful example of Indo-Islamic structural design is associated with myths about the destined lover, it has the tomb of Sant Haji Ali Shah Bukhari. It is notable not only among Muslims, but many people of different castes and religions travel to this place extensively and remotely. Every day around 15 thousand people pay tribute in the dargah. And lakhs of devotees visit the dargah to celebrate Eid-ul-Azha.

Haji Ali Dargah, one of the top places to visit in Mumbai, dates back to 1431 and is associated with Syed Pir Haji Ali Shah Bukhari. He was a wealthy merchant of Bukhara (present-day Uzbekistan) who gave up his wealth and worldly possessions before leaving for a pilgrimage to Mecca. After that, he moved around the world and eventually settled in Mumbai.

Legends say that once a saint saw a woman running into the street because she accidentally spilled the oil she was carrying. He took pity on her and patted her finger on the spot where she spilled oil. The oil ran out of the mud and the woman filled her oil pot and went home happily. However, the saint had a troubling dream that his act had injured the earth. This made him repent and his health also deteriorated. Then he traveled to India. When he reached the Mumbai coast, he decided to stay there permanently and spread the knowledge of Islam among the original inhabitants.

There are many legends along with his death. The most popular is that the saint told his followers not to bury him immediately after his death. He instructed them to throw his coffin into the sea and buried it at the place where it is found. His followers did as instructed and his coffin came to rest on a small mound in Worli. The dargah and the tomb of the saint were later built at the same place. Over the years, this tomb has become a popular pilgrimage site where devotees come to seek blessings.

The dargah was periodically extensively renovated in the 20th century and several new structures were added to the complex. The path leading to the dargah was constructed and the old sanatorium was also replaced anew. Since November 2016, women have been allowed to enter the temple, which was previously prohibited.

The 700-year-old Dargah is a splendid example of Indo-Islamic architectural style. Located 500 meters from the main coast, it is connected to the mainland via a narrow passage that is approximately one kilometer long. This tug is submerged in water during high ridership, making the dargah inaccessible.

The vast edge covers an area of 4,500 square meters and has a height of 85 feet. The main structure and courtyard are made of pure white marble. The building has a huge central dome and four small spires at the four corners. The tomb of the saint rests inside this temple and is covered with a green and red brocade sheet or chadar. Colored glasses adorn the marble pillars inside the main hall of the temple, on which the ninety-nine names of Allah are inscribed. The current structure of the dargah consists of two stories and has separate prayer halls for men and women. You can also see a dedicated qawwal khana (a hall) and a women’s rest house within the dargah complex.

The Haji Ali Dargah in Mumbai is among those places that you must visit while in Mumbai, after all, where else can you see a white tomb surrounded by blue waters.

Q. What is Haji Ali famous for?

A – Haji Ali Dargah is an iconic landmark in Mumbai, which floats in the middle of the sea like a revered mirage. This Indo-Islamic pilgrimage site in Mumbai is a welcoming but charming sight located on an island near the Worli coast. Built in the 19th century, the mosque houses the tomb of Saint Pir Haji Ali Shah Bukhari.

Q. What is the story of Haji Ali?

A – Haji Ali Dargah is a mausoleum and a mosque named after Pir Haji Ali Shah Bukhari, one of the greatest Muslim saints of his time. The saint died during a visit to Mecca, and his coffin miraculously returned to the place. In memory of the saint, Haji Ali Dargah, Mumbai was built in 1431.

Q. Is there a dress code for Haji Ali?

A – Remember to wear nice clothes. There are separate prayer rooms for men and women. They separate at the respective entrances. Photography is prohibited.

A – The Haji Ali Dargah Trust, which initially opposed the entry of women after the ban in 2011-12 and which filed an appeal before the Supreme Court, in October 2016 accepted that women could enter the sanctum.

Q. What is inside a dargah?

A – Dargahs are often associated with Sufi eating and meeting rooms and hostels, known as khanqah or dharamshala. They usually include a mosque, meeting hall, Islamic religious school (madrasa), accommodation for a teacher or caretaker, hospital and other buildings for community purposes.

Q. How do you pray Haji Ali Dargah?

A – Ladies, remember to keep a chunni or stall to cover your head upon entering the dargah. South entrance for gents. Once you offer your prayers, the person near the tomb of Baba Pir Haji Ali will run a broom made of feathers on your head and shoulders to shower the blessings of the God / Saint.

A – The Trust’s proposal to remove encroachments and demolition came after the apex court made it clear that only the mosque is located in an area of ​​about 171 square meters, while the remaining area measuring 90,000 square meters will be preserved. Squatters have to be cleaned.

A – Haji Ali Dargah of Mumbai is listed as one of the most visited temples in the World Book of Records. The 552-year-old dargah, which boasts of Indo-Islamic architecture, is not only a popular religious site but also a tourist attraction.

Q. What is the difference between a dargah and a mosque?

0 – The dargah is a tomb while the mosque is the site of worship. The dargah is the tomb of a learned scholar of Islam where people come. The mosque on the other hand is a place of worship where Muslims pray in groups. Mosques are often attached to major dargahs.

Q. How can I get to Haji Ali by train?

Q. How far is Haji Ali from Mumbai airport?

A – The distance between Mumbai Airport (BOM) and Haji Ali Dargah is 13 km.