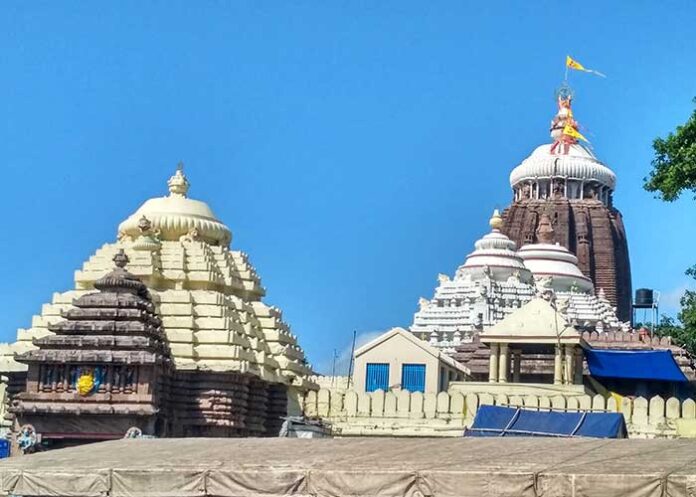 Built-in the 12th century by Raja Chodaganga of the Eastern Ganga Dynasty, the Jagannath Temple is one of the most revered sites in Odisha. Located in Puri, the temple is dedicated to Lord Vishnu and is one of the four major pilgrimage sites or dhams in India. This iconic place is visited by a large number of people every year during the Rath Yatra or the chariot festival. And it is better that you book hotels in Puri well in advance as it gets crowded during this part of the year.

The temple is different from other Hindu temples as the main deity along with other deities are made of wood and are changed every 12 to 19 years and this ritual is known as Navakalebara. There are more fascinating facts and anecdotes to know about the magnificent Jagannath Temple Puri.

Apparently, this temple has been in existence since time immemorial. The legend talks about a king named Indradyumna – a great devotee of Lord Vishnu and his visions of Nilamadhava Vishnu. He started the construction of the temple on the blue mountain (Nilsaila) following divine messages. Once the temple was built, he went to Brahmaloka to invite Brahma to sanctify the temple, but due to Brahma’s meditation which lasted for about nine ages, the temple got buried in the sand and was forgotten over time.

It was later discovered by King Galamadhava belonging to a different dynasty and the temple we see today was later restored and finished by King Chodaganga during the 12th century. It is said that the deity of Narasimha, found in the temple today, was seated by Brahma himself.

Designed in the Kalinga style, the Jagannath temple is 65 meters tall and spreads over 4,00,000 square feet. Its spire is raised above the inner sanctum where the deities are kept. The temple complex is surrounded by gates on all four sides with a conical roof. It also has a huge kitchen which feeds thousands of people every day.

The wheel at the top of the temple, called the Nila Chakra, is made of an alloy consisting of eight metals and is 3.5 meters high, and has a circumference of 11 meters. The temple has four gates: lion, horse, elephant, and tiger in east, south, north, and west direction respectively. The main entrance is the Singh Dwar and opens to the Grand Road.

Lord Vishnu is the presiding deity here. According to the Puranas, Lord Vishnu was worshiped as Jagannath by the local tribals. Hearing about this deity, King Indradyumna sent a priest to locate the deity. After ascertaining the location of the deity, he took the king to see the deity, but by then he had disappeared. Feeling sad, the king started fasting and decided not to return to his palace.

Seeing his determination, a divine voice asked him to build a temple for Vishnu and instructed him to make idols from a fragrant tree by the sea. Then the idols of Lord Jagannath and other deities were made from the wood of this tree and installed in the temple.

There are many mysteries related to Jagannath Temple. The temple is designed in such a way that it never casts any shadow. Every day, a priest changes the flag that is flown over the temple. It is interesting to note that this flag flies in the opposite direction of the wind. Another interesting fact of Jagannath Puri Temple is that birds are never seen flying over the temple.

Navakalebara attracts lakhs of devotees from all over the world and is very important to the historicity and religiosity of Odisha. It is a ceremony where wooden idols are carved out of a tree which is the Daru Brahma tree. It happens every 12, 19 years during the fall of Adhimas. The last Navaklebar happened in 2015 and the next Navkalbar is going to happen in 2035.

Only one neem tree is used and no other variety can be used for this purpose. The tree needs to meet certain specifications and markings before it can be used to make idols of God. The requirements are: chakra (disc), shankha (conch), gada (mace), padma (lotus).

Navakalebara begins with the formation of a hunting party that sets out in search of the ‘Sacred Tree’. The ritual begins after offering a 12 feet long garland to Lord Jagannath and seeking his blessings. This garland is then carried by the husband Mohapatra till the holy tree is found. It serves as a symbol that God himself is traveling with the team.

Once found, the logs of the tree are kept inside the temple premises at a place called Koili Vaikuntha, where old deities are buried and new ones are created.

Held annually around June-July, the Rath Utsav or Rath Yatra is a major procession in Puri that is famous worldwide for its grandeur, religious significance, scale, and sea of people. The idols of Jagannath, Subhadra, and Balabhadra are placed in huge chariots, the largest of which is 14 meters high, with 16 wheels pulled along the Grand Road to the Gundecha temple. The deities stay in this temple for a week after which they are pulled back to their home temple.

Offering offerings to deities is not new in Hindu temples but everything is done on a large scale in the Jagannath temple. About 56 types of prasad are offered to Lord Jagannath every day. After being offered to Lord Jagannath, the prasad is then offered to Goddess Bimala Devi after which it becomes Mahaprasadam. Mahaprasadam is highly revered and very important for spiritual liberation and is available daily in the afternoon.

Jagannath Puri Temple Timings: The temple timings are from 5 am to 12 noon. Non-Hindus are not allowed to enter the temple premises. There is a ban on the darshan of idols for two weeks before the Rath Yatra.

The temple can be visited throughout the year but if you want to witness and be a part of the grand Jagannath Puri Rath Yatra then you must visit somewhere in June-July. You have to check the actual dates as per the year in which you are planning to go. Otherwise, avoid the peak summer months and book your tickets around November-December which is the best time to visit Puri and have a pleasant and relaxing stay in Puri hotels. You can also attend the Winter Festival around this time. Plan a trip to Puri to visit one of the most iconic places in the country.

Read More About Temples in India

Q. Where Jagannath temple is located?

Q. What is the story of Jagannath Temple?

Q. Who built the Jagannath Temple?

A – Sri Jagannath Puri Temple is one of the most impressive monuments in the Indian state of Odisha, built by Ananta Varman Chodaganga Deva, a famous king of the Ganga dynasty in the 12th century at Puri on the seashore.

Q. Are Jagannath and Krishna the same?

Q. Where is the heart of Lord Krishna kept?

A – He discovers a frozen blue stone—Krishna’s heart—in the forests around Puri and worships this huge stone as Neela Madhava. A local king named Indradyumna heard about this miraculous blue rock, which is being worshiped by the tribals.

Q. What is inside the Jagannath idol?

A – The old idols of Jagannath, Balabhadra, and Subhadra are buried in the “Koli Baikuntha” inside the temple. People hold the soil in which they are buried, it is of divine value. They are sure that this mud helps them in their hour of need.

Q. Who was the father of Jagannath?

A – Das was born in an established Brahmin family of Kaushiki gotra in Kapileshwarpur Sasana (one of the 16 traditional Sasan villages of Puri) on Radhashtami in 1491. His mother was Padmavati Devi and his father was Bhagwan Das. His father was the speaker of Bhagwat in Utkal.

Q. Why is Jagannath Puri famous?

A – One of the holiest pilgrimage sites for Hindus, Puri is also known as Jagannath Puri is located in the state of Odisha. Famous for the Jagannath Temple, Puri is believed to be the final resting place of Lord Vishnu. It is no wonder that it is a very important place of worship for Hindus.

Q. Who is not allowed to visit Jagannath Temple?

A – Non-Hindus are not allowed inside the temple. There is an image replica of the idol inside which is called Patita Pawan to pay homage to Lord Jagannath. There is no entry fee.

Q. In which year was the Jagannath temple built?

A – Jagannath temple built was built in 1161

Q. How many gates are there in Jagannath Temple?

A – The Jagannath Temple in Odisha (Orissa) has four entrances. These are named Singhdwara, Ashwadwara, Hathidwara, and Vyaghradwara and these names refer to the lion, horse, elephant, and tiger.

A – Due to spiritual ecstasy, Krishna’s eyes became very large and their hands and feet got absorbed in his body. This form of Krishna is called Jagannath. So, Lord Krishna is called Lord Jagannath when Krishna manifests the highest form of divine feelings.