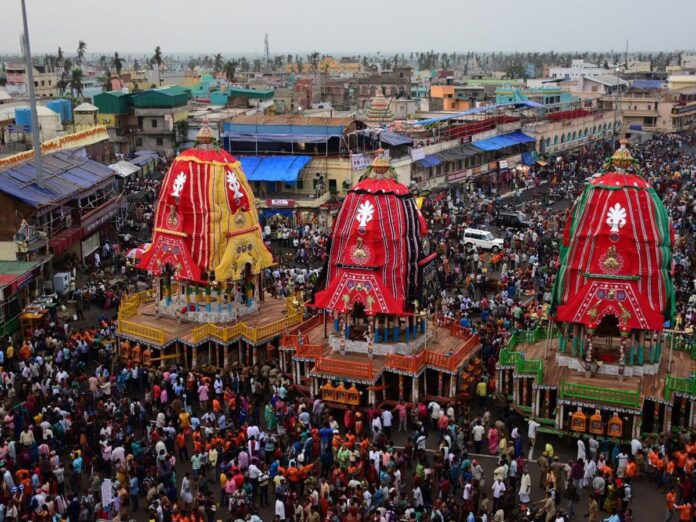 Jagannath Puri Rath Yatra is the biggest festival of Odisha, and every year lakhs of devotees from all over the world reach Puri to be a part of this holy yatra. It is an 11-day long festival in which the idols are taken in a chariot to a nearby temple and they return after a period of nine days. Puri Rath Yatra is the oldest yatra in the world and it is also mentioned in ancient Hindu texts – Puranas.

Today the festival is celebrated internationally in 108 cities around the world, including places such as New York, London, Moscow, Paris, Rome, Kuala Lumpur, etc., as well as the Indian cities of Kolkata and Mumbai.

Jagannath Puri Rath Yatra is definitely one of those festivals that you must do at least once in your bucket list of a lifetime. Here’s everything you need to know about this grand Puri festival.

The Rath Yatra begins on the second day of the Shukla Paksha of the month of Ashadha, as per the Odia calendar. In 2022 The Puri Rath Yatra will be held on Thursday, June 30th is day number 181 of the 2022 calendar year with 8 months, 5 days until Rath Yatra 2022.

Jagannath Puri or Lord Krishna is the presiding deity of the temple. The story goes that every year Lord Krishna wishes to visit Mathura, his birthplace. So he is taken to the Gundicha temple – his aunt’s house, which is 3 km away, along with his brother – Balabhadra and sister – Subhadra.

As he is on his way to his birthplace, his siblings accompany him, and not his wife – Goddess Lakshmi, who is left behind in the temple. Jagannath (Krishna) accompanied Balabhadra (Balarama) and Subhadra in their respective chariots to the Gudicha temple, and this marks the famous Puri Rath Yatra.

They return from their maternal aunt’s house on the ninth day, where they are fed poda pitha, a sweet pancake, the favorite of Lord Krishna. Poda Pitha is given as Prasad to all the devotees on this day. The three deities then return home and are re-established in the temple on the 11th day, decorated with gold.

The main focus of the Puri Rath Yatra is the huge chariots in which three deities travel to the Gundicha temple. These chariots are made of special wood and only a certain group of carpenters has the right to build it, who has inherited this trade. The auspicious day of Akshaya Tritiya is when the construction of the chariots begins.

In front of each of these chariots are four wooden horses. The chariots are attached to long ropes about 50 meters long and are pulled by them. This event is also called the festival of chariots, as it is a procession of three chariots.

On the day of the yatra, three deities are carried on chariots with Sudarshan Chakras in an elaborate ceremony. These chariots are decorated in advance and the king himself cleans them on that day. He decorates them with flowers and also cleans the ground around the chariots. The passage is then sprinkled with sandalwood.

Chariots are pulled by priests and devotees to get a chance to pull the chariots. It is considered very auspicious to do so. The procession is accompanied by the singing of devotional songs as well as the beats of drums, trumpets, tamburas, etc. Children also line the streets and join in the collective chorus. The journey begins with the chariot of Balabhadra, followed by Subhadra, and finally the chariot of Lord Jagannath.

The return journey after 9 days is called Bahuda Yatra. The procession now begins with the chariot of Lord Jagannath in reverse order. The return journey reaches Jagannath Temple in the evening via Mausi Maa Temple and stops outside the temple. The next day the deities are dressed in new clothes and decorated with gold ornaments. Finally, on the eleventh day, they are reinstalled in the temple. It marks the end of the Rath Yatra.

Jagannath Puri Temple is accessible only to Hindus throughout the year. However, everyone has access to the temple on the day of Rath Yatra. The journey also gives non-Hindus and foreigners a view of the deities. These are otherwise unobservable to them for the rest of the year.

The idols of the Jagannath temple are replaced every 10 to 19 years, depending on the auspicious date when the double month of Ashadha occurs. These idols are carved out of specific neem wood. The transformation from old to new idols is a huge occasion that is marked with elaborate and secret ceremonies. Called the Navkalebar ritual, it was last performed in 2015, and the next one will be held in 2023.

How To Reach Puri

The nearest airport to Puri is the Biju Patnaik Airport in Bhubaneswar, which is connected to 13 cities across India including all the metropolitan cities. The distance from Bhubaneswar to Puri is just 60 km and can be easily covered by cab or bus.

Puri is well connected by trains and buses to different parts of the country. The distance from Jagannath Temple to Puri Railway Station is 28 km. It is the endpoint of the East Coast Railway. Several express and superfast trains run from metros and major cities to Puri. Puri Bus Stand is near Gundicha Temple and regular buses ply from here from Bhubaneshwar, Cuttack, and Konark. Bus service is also available to Kolkata, Visakhapatnam, and other cities.

Places to Visit in Puri

Apart from Jagannath Temple and Gundicha Temple, there are many interesting places to visit in Puri. One of the most popular is Puri Beach which is famous for its sand sculptures. About 35 km from Puri is the famous Konark Sun Temple, and the Konark beach is nearby. Other attractions of Puri that you must visit are Chilka Lake, Shri Loknath Temple, Sakshigopal Temple, Raghurajpur Artist Village, and Pipili Village.

If you haven’t been a part of the Jagannath Puri Rath Yatra yet, make your plans and leave! It is the grandest festival of Odisha tourism.