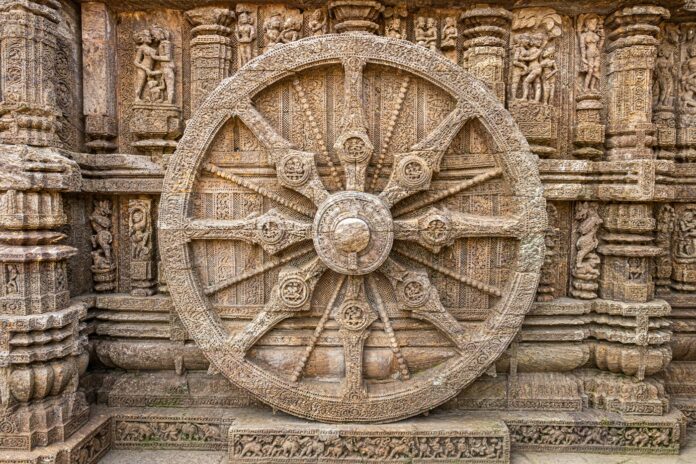 The Konark Sun Temple is located in the eastern state of Odisha near the holy city of Puri, which is dedicated to the Sun God or Surya. It is a monumental representation of the chariot of the sun god Surya; Its 24 wheels are decorated with symbolic designs and are headed by a team of six horses. It is a masterpiece of Odisha’s medieval architecture and one of the most famous Brahmin sanctuaries in India.

The Konark temple is widely known not only for its architectural grandeur but also for the complexity and abundance of sculptural work. It represents the highest point of achievement of Kalinga architecture which reflects the grace, joy and rhythm of all the wondrous diversity of life.

The temple, declared a World Heritage by UNESCO, was built in 1250 AD during the reign of the Eastern Ganga king Narasimhadeva-I (AD 1238-64). There are two rows of 12 wheels on either side of the Konark Sun Temple. Some say the wheels represent 24 hours a day and others say 12 months. The seven horses are said to symbolize the seven days of the week. Sailors once called this Sun Temple of Konark the Black Pagoda because it was to drag ships into the shore and cause the ships.

A small town in the picturesque state of Odisha, Konark is famous worldwide for its magnificent centuries-old Sun Temple. Built during the rule of King Narasimhadeva, also known as the Black Pagoda, the temple was declared a UNESCO World Heritage Site in 1984. This place will introduce you to a completely unique holiday by introducing you to the hundred-century-old trail, magnificent tranquility.

And magnificent Indian rituals. It is no wonder that Konark has its own charm and uniqueness which makes tourists completely crazy about it. The magnificent monuments of this beautiful place reflect the symbol of Oriya structural design. The famous Konark Dance Festival receives accolades from all sides, where amazing classical dance performances delight visitors’ eyes. The appeal does not end; There is much to make Scout one of the most sought after destinations in India.

Konark is a mixture of two words, kona and arka meaning corner and sun, when they are joined together, symbolizes the corner sun. If you go to the pages of the history of Konark, you will find that this small place was one of the ancient sites involved in Surya Puja.

According to myths, after Lord Krishna cursed his own son Samba of leprosy, his famous Sun Temple dedicated to the Sun God materialized. When God could not see him in this condition, he asked Samba to start worshiping the Sun God because only he could cure his illness and put an end to the curse. The boy nodded for advice and decided to spend all his time worshiping Lord Surya. He had done severe penance for about 12 years, impressing the Sun God with his determination, which gave him the blessings of good health. Therefore, Samba built the Sun Temple as a token of respect for the Sun God.

ASI Museum: Located on the exterior of the Sun Temple, the ASI Museum looks at some beautiful models of Oriya structural design of the old centuries. It consists of four galleries displaying 260 different relics taken from the Sun Temple. The museum is open from 10 am to 5 pm on all days except Fridays.

Sun Temple: Built by Narasimha Dev during the 13th century, the Sun Temple is one of the most popular testimonials in India. The grand architecture and various themes of the temple attract the attention of the visitors.

Konark Beach: A magnificent beach where travelers can enjoy the serenity of the pilgrimage is none other than the famous Konark Beach. During the festival of Magha Saptami, devotees take a dip in the holy water and watch the rising sun. In fact, the place provides a pleasant and serene atmosphere of relaxation.

Getting there | Konark Sun Temple

By Air: The nearest airport to reach Konark is Bhubaneswar, which is located 40 miles away. For further journey one can take taxi or cab to Konark.

By Road: Konark is well connected to all major cities of India by good motorable roads. Volvo bus services are also available from major cities in and around the state of Odisha.

Q. Why is the Sun Temple of Konark famous?

A – Konark Sun Temple, a UNESCO World Heritage Site, is famous for its unique architecture. Its geometric patterns and carved wheels served as a sun dial. Because of its dark color, the temple was called the Black Pagoda, and was used by ancient sailors as a navigational site.

Q. What is inside the Konark Sun Temple?

A – More than a century after the 13th century World Heritage Monument- Sun Temple in Konark was filled with sand, the Archaeological Survey of India is now planning to remove sand from the Jagmohan (assembly hall). However, those massive amounts of sand have caused cracks inside the structure.

Q. What is the best time to visit Konark Sun Temple?

A – Hi if you are fond of photos then I would say that the best time to visit the temple is around 6-630 in the morning. When you see the first golden rays of the sun falling on the temple, you can see the miracle of architecture. The temple opens at 6 am and is often visited by people.

Q. Who destroyed the Konark temple?

A – According to another very popular theory, the temple was destroyed by Kalapahar (Kalapahad was the title given to Sultan Suleman Karrani, a Muslim governor of Bengal) who invaded Orissa in 1508. He also destroyed many other Hindu temples in Orissa along with the Konark Sun Tample.

Q. Why is Konark temple closed?

A – According to an ASI official, other historical sites were opened earlier, but the Sun Temple at Konark remained closed till 31 August due to restrictions imposed by the Puri district administration.

Q. Which are famous sun temples?

A – The most important sun temple in the country is the Konark Sun Temple, Odisha, and there are some newer ones, the old temples have acquired an important place in the religious life of Indian Hindus. Located in Gujarat, Modhera Sun Temple was built between 1026-27 CE.

Q. How many kilometers from Puri to Konark?

A – Konark is just 36 km from Puri and about 60-70 km from Odisha’s capital Bhubaneswar.

Q. Why should I go to Konark temple?

A – The Konark Sun Temple is not only an amazing UNESCO World Heritage Site. It is undoubtedly the grandest and most famous Sun Temple in India, and one of the most popular monuments in the country. About 2.5 million people visit it every year. It is the highest footfall of any non-Mughal monument.

Q. Why is Konark called the Black Pagoda?

A – The Konark Sun Temple is located in the eastern state of Odisha near the holy city of Puri, which is dedicated to the Sun God or Surya. Sailors once called this Sun Temple of Konark the Black Pagoda because it was the cause of ships pulling into shore and causing the destruction of ships.

Q. What is the science behind the wheels of Konark temple?

A – A heavy magnet is located at the top of the Konark temple. Another distinctive feature of this temple is that each of its two stones is placed between iron plates. The arrangement of magnets in the temple is that it seems that the idol floats in the air.

Q. What does black pagoda mean?

A – Referred to it as the ‘Black Pagoda’ due to its dark color and its magnetic power, which dragged the ships to shore and caused the ships.

Q. What is the importance of Sun Temple?

A – A sun temple (or solar temple) is a building used for religious or spiritual activities, such as prayers and sacrifices, dedicated to the sun or solar deity. Such temples were built by many different cultures and are distributed around the world including India, China, Egypt, Japan and Peru.