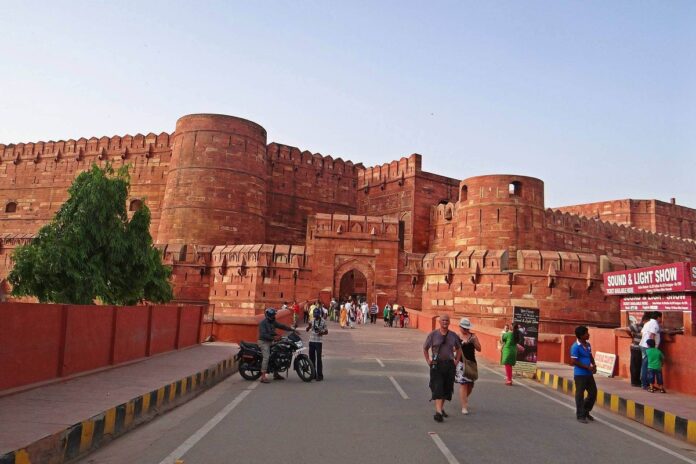 Agra Fort is a historical fort located in the city of Agra in India. It was the main residence of the emperors of the Mughal dynasty until 1737, when the capital was shifted from Agra to Delhi. Fort is a UNESCO World Heritage Site. It is about 2.5 km northwest of its more famous sister monument, the Taj Mahal. The fort can be more accurately described as a walled city.

After the first battle of Panipat in 1526, the victorious Babar stayed in the palace of Ibrahim Lodi, in the fort. Later he made a baoli in it. His successor Humayun was crowned in the fort in 1530. He was defeated in 1540 by Sher Shah Suri at Bilgram. The fort remained with Suri until 1555, when Humayun reclaimed it. Adil Shah Suri’s commander, Hemu, re-captured Agra in 1556 and fleeing the governor to Delhi where he met the Mughals at the Battle of Tughlakabad. Sheesh Mahal, Agra Fort: The effects produced by lighting candles in the Sheesh Mahal.

Realizing the importance of its central position, Akbar made it his capital and reached Agra in 1558. His historian Abul Fazl recorded that it was a brick fort known as ‘Badalgarh’. It was in a ruins condition and Akbar built it with red sandstone from Barauli area of ​​Dholpur district in Rajasthan. The architects laid the foundation and it was built with bricks in the inner core with sandstone on the outer surfaces. Around 4,000 builders worked on it daily for eight years, completing it in 1573.

Only during the reign of Akbar’s grandson, Shah Jahan, did the site occupy its present position. Shah Jahan built the beautiful Taj Mahal in memory of his wife Mumtaz Mahal. Unlike his grandfather, Shah Jahan’s inclination was of white marble buildings. He destroyed some of the earlier buildings inside the fort to build himself.

Towards the end of his life, Shah Jahan was demoted and detained at the fort by his son Aurangzeb. It is rumored that Shah Jahan died in the Musamman Burj, a tower with a marble balcony with a view of the Taj Mahal.

The fort was invaded and captured by the Maratha Empire in the early 18th century. Subsequently, it changed hands between the Marathas and their enemies several times. After their disastrous defeat by Ahmed Shah Abdali in 1761 at the Third Battle of Panipat, the Marathas remained out of the region for the next decade. Finally Mahadji Shinde captured the fort in 1785. It was defeated by the Marathas to the British during the Second Anglo-Maratha War in 1803.

The fort was the site of a battle during the Indian Rebellion of 1857, which ended the rule of the British East India Company in India, and led to a century of direct rule of India by Britain.

By Air
Agra’s Kheria Airport is also a military base. It is a seasonal commercial airport and is connected only by Air India flights from New Delhi. The flight from Delhi to Agra is less than an hour long. Kheria Airport is 13 km away from Agra city. Hire a taxi from the airport to get to the city, which will take you about 10-15 minutes depending on the traffic.

By Train
Agra is situated on the Delhi-Mumbai and Delhi-Chennai route and is well connected to most cities across India. There are regular trains to Agra from cities like Delhi, Jaipur, Gwalior and Jhansi. Agra is also well connected to other parts of the country such as Kolkata, Mumbai and Chennai. Agra has five railway stations – Cantt Station (Main Station), Agra Fort Railway Station, Raja Ki Mandi, Agra City and Idgah Railway Station. The Taj Mahal and Agra Fort are a short distance from Agra Cantt railway station and one can also hire prepaid taxis, auto rickshaws or cycle rickshaws to visit these attractions.

Q. What is inside the Agra Fort?

A – The fort has magnificent palaces in both red sandstone and white marble, built by two generations of prolific builders, Akbar and later Jahangir and Shah Jahan. Of the nearly 500 Akbari buildings built in Bengal and Gujarati traditions, only a few remain, which are in a band along the river.

Q. Is Red Fort and Agra Fort the same?

A – Fort, also known as Red Fort, is a 16th century large fort of red sandstone located on the Yamuna River in the historic city of Agra, west-central Uttar Pradesh, north-central India.

Q. What is the name of the fort in Agra?

A – Near the gardens of the Taj Mahal is an important 16th century Mughal monument known as the Red Fort. This powerful fort of red sandstone is within the 2.5 km long enclosure walls, the royal city of the Mughal rulers.

A – Agra Fort is situated on the banks of the Yamuna River and is just 2.5 km from the global tourist magnet – Taj Mahal. The address of Agra Fort is, Rakabganj, Agra, Uttar Pradesh 242003. Agra Fort is not a closed day as this fort is open to the public throughout the week.

Q. Why is Agra Fort famous?

A – Agra Fort is a historical fort located in the city of Agra in India. It was the main residence of the emperors of the Mughal dynasty until 1737, when the capital was shifted from Agra to Delhi. Agra Fort is a UNESCO World Heritage Site. It is about 2.5 km northwest of its more famous sister monument, the Taj Mahal.

Q. How far is the Fort of Agra from the Taj Mahal?

A – Fort, situated at a distance of about 2.5 km from the Taj Mahal, is spread over 94 acres on the banks of the Yamuna River.

Q. Who is the king of Agra?

A – It is generally accepted that Agra was an ancient city since the time of the Mahabharata (see above) and yet Sultan Sikandar Lodi, the Muslim ruler of the Delhi Sultanate, founded Agra in the year 1504. After Sultan’s death, the city was handed over to his son Sultan Ibrahim Lodi.

Q. How long does it take to visit Agra Fort?

A – Generally, you should give a budget of 2 to 3 hours depending on the time it takes to travel to Fort.

Q. Who lived in Agra Fort?

A – Agra Fort is a historical fort located in the city of Agra in India. It was the main residence of the emperors of the Mughal dynasty until 1638, when the capital was shifted from Agra to Delhi. Before being captured by the British, the last Indian ruler to occupy it was the Marathas.

A – Yes, both monuments will be open on Holi. The Taj Mahal is closed on every Friday and the rest of the monuments are always open.

Q. Is Agra Fort worth seeing?

A – Agra Fort is a UNESCO World Heritage Site. Even though there are many forts in India, it is worth seeing. It has many fairy-tale palaces, and its grandeur is awe-inspiring.