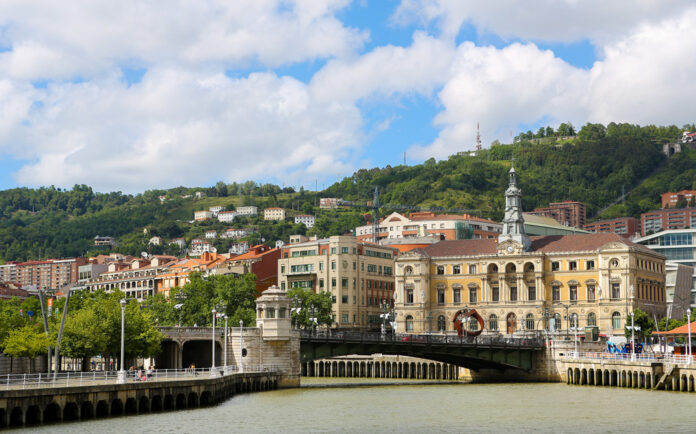 Bilbao is the largest city in the Spanish Basque Country, rich and well-maintained, with excellent gastronomy and at least one world-famous landmark – the Guggenheim Museum of Contemporary Art. One of the best ways to get into the spirit of Bilbao is to come here during the city’s main holiday, the Big Week (Spanish name Semana Grande; Basque – Aste Nagusia).

We will tell you what to do in one of the most beautiful cities in the north of Spain.

Take a walk along the river

On the way to the Bay of Biscay, the waters of two rivers – Nervion and Ibaizabal – merge in Bilbao, dividing the city center in two; on the map, it appears as Ria de Bilbao, that is, “Mouth of Bilbao”. The lion’s share of attractions is located along this estuary, including the Guggenheim Museum, the City Hall, the Ribera Central Market, the Church of San Anton, depicted on the city’s coat of arms. So a walk along the embankment will allow you to look around and get an idea of ​​the architectural appearance of the city, where graceful buildings of the 18th-19th centuries are interspersed with ultra-modern structures made of glass and steel.

Among the most famous examples of modern architecture are the Subisuri Bridge (literally “White Bridge”) designed by Santiago Calatrava, which, when viewed from below, resembles the spine of some ancient giant lizard, and the already mentioned Guggenheim. And also right on the river is the Maritime Museum (Museo Maritimo), which tells about the past and present of shipping in a city that has long lived in fishing and cargo transportation.

Culturally enlighten and eat at a Michelin-starred restaurant

The Guggenheim Museum resembles a giant piece of foil, carelessly crumpled by a giant’s hand. The attitude of the locals to this architectural masterpiece (as well as to the contents of its halls) is twofold. But the giant flower bed sculpture in the shape of a puppy sitting in front of the entrance enjoys the constant sympathy of the townspeople who pronounce its name Puppy as “Puppy”. In addition to the permanent exhibition, the museum always has several temporary exhibitions – for example, until September, there you can see the works of the American-French artist and sculptor Louise Bourgeois.

On the days of the Big Week from 23:00 to 2:00, jazz is traditionally played here. You can sit in the hall with a glass of Basque white wine, or you can wander through the huge, several floors, exhibition space, listening to the sounds of the saxophone flying from afar. The museum building houses Nerua, one of the city’s restaurants awarded the prestigious Michelin star. There are two more “star” establishments literally within a 5-minute walk: Etxanobe and Serantes III. They, of course, are not the cheapest in the city, but they are also not prohibitively expensive – the average check is up to 100 euros.

Bilbao is surrounded by mountains rich in iron ore deposits. Due to this location, the city has been famous since the Middle Ages as a center for the extraction of these resources. Active development of deposits during the years of the industrial revolution made it possible to make a powerful leap forward in economic terms and almost ruined the local ecology. Fortunately, this period of Bilbao’s history is over – today, freshness and coolness blow from the low green mountains to its streets. And just from the top of one of these mountains, Archana, the best panorama of the city opens. A small funicular goes to Archana, although it’s not difficult to climb on foot – the ascent is not steep and not at all long.

Get lost in seven streets

At the dawn of its existence in the XIV century, Bilbao consisted of only three streets, and a century later expanded to seven. These very seven streets, connected by narrow, like corridors, cantonal lanes are the historical center of Bilbao, its core. It is here that the main monuments of local antiquity are located – the Cathedral of St. James of the 15th-16th centuries, the stone “Dog” fountain (Fuente del Perro) with drinking water, and the oldest surviving palace in Bilbao, Palaio Arana from the end of the 16th century. Here and on the adjacent New Square (Plaza Nueva) – the highest concentration of restaurants and bars. And here, again, the lion’s share of planned and spontaneous cultural events takes place on the Big Week.

During lunch and dinner hours, as is customary in other cities in Spain, crowds of locals ply from bar to bar, ordering a little everywhere: a glass of wine or cider with a variety of pintxos sandwiches (a traditional local snack that comes with anything from meat, fish, and pates to mushrooms, vegetables, and mayonnaise salads). You can follow their example or, after walking in the center, sit down in one of the restaurants, ordering something more satisfying – Biscay cod or, say, a roast oxtail.

Having listed far from all the interesting places in Bilbao, we have to stop. Otherwise, there will be no time at all to talk about the holiday. Big Week cannot boast of ancient history – it has been celebrated only since 1978. But in terms of the degree of involvement of the population, it has few equal. The townspeople unite in large compass teams and organize concerts, parades, sporting events, performances, culinary competitions, and, of course, trade-in food, drinks, and souvenirs. In fact, for all days of the holiday, the center of Bilbao turns into something like a rock festival site: it is primarily about the atmosphere, and not about the music sounding everywhere, although rock prevails in the repertoire of local concert venues.

It is worth going there not only for the sake of the festival atmosphere but also in order to get acquainted with the long-standing Basque traditions: folk dances and unusual sports, such as lifting stones and chopping wooden decks at speed and admire the costumed processions of giants and bigheads (the latter, however, typical for other parts of Spain – not only the Basque Country). In order not to interfere with locals and tourists to have fun, traffic in the center is completely blocked, with the exception of trams. After dark, the sky above the city is colored with fireworks every evening. It is difficult to answer briefly what all these people are celebrating. Perhaps the simplest and most accurate way would be to say that they are celebrating life.

Previous article
Mauritius for everyone
Next article
Boboli Gardens in Florence