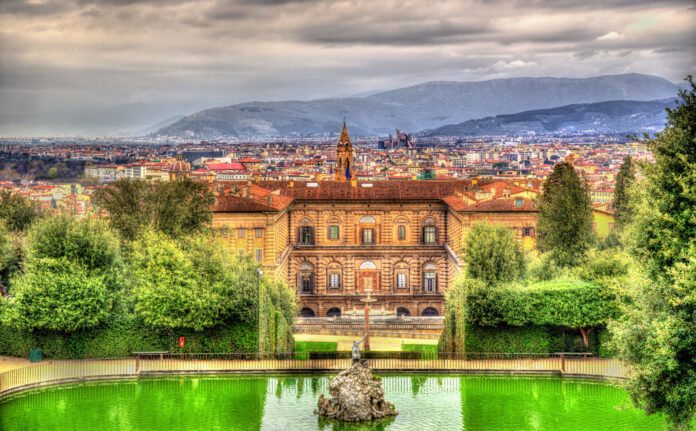 In two months, the premiere of the film “Inferno” will take place – the screen version of the sequel to the popular novels by Dan Brown “The Da Vinci Code” and “Angels and Demons”. This time, the brave professor Robert Langdon will travel to Italy, solving another portion of mystical mysteries. The plot of the plot takes place in Florence, and one of the most dramatic moments is connected with the escape of the hero through the Boboli Gardens. Today we will tell you more about this park of the Italian Renaissance era.

The first mentions of the Boboli Gardens date back to the 16th century. According to historical records, in 1549, the wife of Duke Cosimo I de Medici acquired the Pitti Palace from the ruined descendants of a once-wealthy family. Behind the palace, she discovered a small hill, from which a magnificent view of the surroundings opened. The duke’s wife was so impressed that she immediately decided to build a park here, which would emphasize the influence and wealth of her family. The famous sculptor Niccolo Tribolo was invited to create the future masterpiece, but he did not have time to completely complete his work. Later, Bartolomeo Ammanati, Giorgio Vasari, and other masters worked on the park.

After the design of the park was completed, the Medici regularly held official receptions, friendly gatherings, organized performances by theater companies, and the first opera performances performed by the Florentine Camerata. This was the name of the community of poets, philosophers, and musicians, formed in 1573 with the aim of comprehending the experience of ancient Greece and translating it into Italian works.

Over the years, the territory of the garden has expanded. It reached its current size by the end of the 17th century. And since 1766, the park has been constantly open to visitors. While walking through the Boboli Gardens, you can admire the sculptures of antiquity and the Italian Renaissance. Unfortunately, over the years, for the sake of better preservation, more and more original statues are transferred to museums in Florence (however, exact copies are always installed instead).

It’s easy to navigate the park. Alleys and gravel paths conditionally divide the garden into several “districts”. From the amphitheater, in the central part of which there is an obelisk brought by the Medici family from Egypt, along with the spreading oaks and cypresses, the main path begins, which will lead you to the Palazzo Pitti – the residence of the Grand Dukes of Tuscany. There is a fountain of Neptune near it. The Italians nicknamed it “the fountain with a fork.” It’s all because of the memorable trident that the god of the seas holds in his hands.

In the back of the garden, there is a sculpture of a midget sitting on a turtle shell. It is known from documents preserved in the Medici archives that the statue depicts a court jester who once lived with a family. Not far from it is the Buonalenti grotto, which consists of three rooms decorated with frescoes and sculptures. From the inside, it resembles a small cave with stalagmites and stalactites. In one of the rooms, you can see a copy of the famous work of Michelangelo “Slaves”. There are three more grottoes in the park: “Madama”, created according to the plot of the ancient Greek myth about Amalfea, “Grotto of Moses” and “Grotto of Adam and Eve”, the design of which is based on biblical stories.

At a distance from the Buonalenti grotto lies the Garden of Jupiter. Here you can relax near a small horseshoe-shaped amphitheater admiring the octagonal Artichoke fountain.

Perhaps the most blooming “sector” of the park is the Cavaliere Garden: peonies grow here in early spring, and roses bloom in May. Far from the center of the park, the artificial Isolotto Island has been created, where very rare varieties of roses and dwarf citrus trees are grown, and in the north, there is an observation deck where visitors can take pictures against the backdrop of the famous Florentine rooftops. From here you can see the so-called Coffee House, built in the 18th century. Once upon a time, local nobles, sitting on its terrace, enjoyed the fragrance of flowers, drank coffee, and had small talk.

The park is open daily, and opening hours depend on the season:

A visit to the Buonaleti grotto is possible only at certain times and only when accompanied by park workers.

Entrance to the Boboli Gardens is paid. The ticket costs 10 euros (720 rubles). It should be remembered that with tickets to the park, you can sometimes visit various temporary exhibitions at the Pitti Palace. And the last thing: the sale of food and drinks is prohibited on the territory of the park, so you should take care of light snacks and a blanket in advance so that you can have a picnic in this beautiful place.