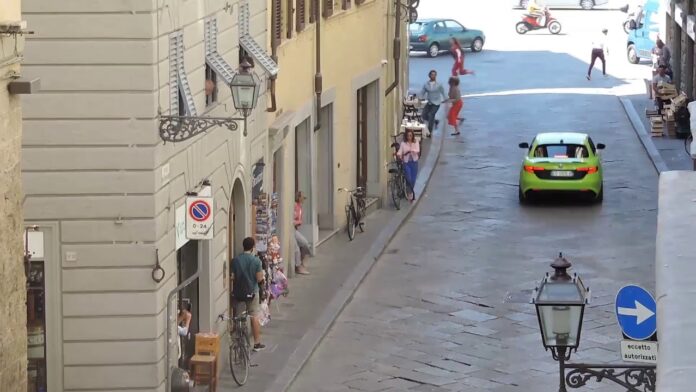 Five different genres: romantic melodrama, historical biography, psychological thriller, mystical quest, and modern action thriller. World-famous directors. Star cast. All these five such different films have one thing in common – beautiful Florence became the scenery for their filming. The list for those who miss Italy was compiled by the city guide. Here are 5 films filmed in Florence.

“Room with a view”

The rooms without a view, more precisely, room 22 of the Quisisana, where the first frames of this Oskoran film were filmed, no longer exist. The old 19th-century guesthouse was a favorite destination for English-speaking tourists who came to Florence. The building was significantly damaged in an explosion by the Italian mafia on Georgofili Street in 1993. After a long restoration, the four-star Degli Orafi Hotel was subsequently opened here. And just from number 22 began the love story of the Englishwoman Lucy (Helena Bonham Carter) and her slightly eccentric fellow countryman George Emerson (Julian Sands), who kindly gave the young traveler and her cousin his room with a magnificent panorama of the city.

Florence itself became the scenery for the young couple’s nascent romance: the romantic embankments of the Arno, the picturesque Ponte Vecchio, the masterpieces of the Basilica of Santa Croce, the famous squares of Santissima Annunziata and Piazza Della Signoria, the hills of Fiesole immersed in the lush spring greenery.

“A Room with a View” is a screen version of the novel of the same name by the English writer of the early XX century E. M. Forster. In addition to three Academy Awards for Best Adapted Screenplay, Set and Costume Design, the film has won dozens of different international awards.

This is the most romantic motion picture ever filmed in Florence. The very first credits are decorated with ornate Florentine grottos and are accompanied by the lyrical aria of the Tuscan composer Giacomo Puccini’s “O Mio babbino Caro”. Recommended for everyone who loves beautiful love stories.

“You see, Luca, Florence is not just shiny cars and ice cream, as a little boy might think. These are wonderful statues, the divine beauty of forms, and you can join this world, create, create, live like the old masters, be a part of the embodiment of the divine plan. ” At the beginning of the film, such an admonition is given to eight-year-old Luka by one of the brightest eccentric English ladies who took over the child’s care. This film is partly the biography of one of the most talented Italian directors of the 20th century, Florentine Franco Zeffirelli. This film is also his thanks to the Allied Forces, who liberated Tuscany from German occupation in 1944.

The scene is Mussolini’s Florence, on the eve and during the Second World War. And the main characters are a group of English-speaking women – expatriates, who not only took into the care of the little Italian Luca but also bravely endured persecution and deprivation during the times of fascism. The director managed to assemble a truly stellar team of amazing English-speaking actresses: Judy Dench, Joan Plowright, Maggie Smith, Lily Tomlin, Cher.

And although the film tells about very difficult times, its light tone skillfully combines elements of drama and comedy. This is felt even in the film’s slogan: “The History of Civilized Disobedience.”

Shrouded in the predawn mist of Arno, ominous silhouettes of sculptures on the walls of the Loggia Lanzi and Piazza Della Signoria – this is how Florence appears to the viewer in the film by Ridley Scott.

Shadows of a dark past come to life in the sequel to the blockbuster Silence of the Lambs. FBI special agent Clarissa Starling is forced to begin the search for one of the most dangerous killers in the world, whom she encountered 10 years earlier – Hannibal Lector. This time he plays his twisted criminal game from the cradle of the Renaissance.

As a storyline, the director played on one of the bloodiest moments in the history of Florence – the Pazzi conspiracy against the Medici. One of the heroes of the film, a descendant of a family of conspirators, Inspector Rinaldo Pazzi, as once one of his ancestors paid for his greed – he was hanged from the window of the Palazzo Vecchio. But first, Doctor Lector rips open his stomach in order to accurately repeat the plot so often found in medieval art: the greedy hanging Judas with his intestines falling out.

In the frames of the film, the famous Florentine piazzas and the interiors of the old palazzo flicker. The courtyard of the Basilica of Santa Croce turns into a twilight theater with flickering candles, and the water from the “Florentine boar” fountain, familiar to every tourist, is mixed with the blood of another victim of Hannibal. More than once in the film, the theme of the work of the Florentine poet Dante Alighieri slips. Classics of psychological thrillers. Warning: not for the faint of heart!

The film is based on the bestseller of the same name by Dan Brown. Soon after the book was published, unusual excursions to the places mentioned in the novel appeared in the city. And still, by the way, they are popular with tourists.

“Inferno” is a continuation of the adventures of Harvard professor Robert Langdon, who several times before, solving puzzles and reading secret messages through the language of symbols, was able to save the world in “The Da Vinci Code” and “Angels and Demons”. The title of the book and the film is borrowed from Dante Alighieri: “Inferno” is the title of the first part of his “Divine Comedy”. The writer also named in his book a laboratory-created virus in order to save the planet from overpopulation. And Langdon, in turn, must save the planet from this virus.

An illustration of a map of hell by the Florentine Renaissance artist Sandro Botticelli gives the professor the first clue to his quest to neutralize the virus. Robert Langdon (Tom Hanks) and his partner Sienna Brooks (Felicity Jones), fleeing pursuit and looking for clues to puzzles, find themselves in the main landmarks of Florentine: Boboli Gardens, Vasari Corridor, Uffizi Gallery, Palazzo Vecchio, Baptistery. At the end of the film, the heroes travel to Venice and Istanbul.

The scenario of this action movie is rather trivial: a team of dexterous mercenaries under code names, numbers, is going on a mission to save the people of the country of Turkistan from a cruel dictator-psychopath.

The film begins with a crazy car chase through Florence. The bright green Alfa Romeo Giulia Quadrifoglio, on which the main characters rush along the narrow streets of the city, sweeping away everything in their path, makes impossible pirouettes. She manages to call into the Palazzo Medici Riccardi, miraculously flies in the corridor of the Uffizi Gallery, drives through the courtyard of the Palazzo Vecchio, it is unclear how she ends up on its second floor and rushes through Hall 500, enters the courtyard of the Palazzo Pitti, where, for the beauty of the frame, they put a copy, David Michelangelo.

In addition to Florence, filming took place in Siena, Taranto, and Los Angeles, with Ryan Reynolds, David John Franco, Corey Hawkins, and Melanie Laurent starring. This movie is more about car races, shooting and dizzying acrobatic stunts of stuntmen – perfect if you need to unload your head.