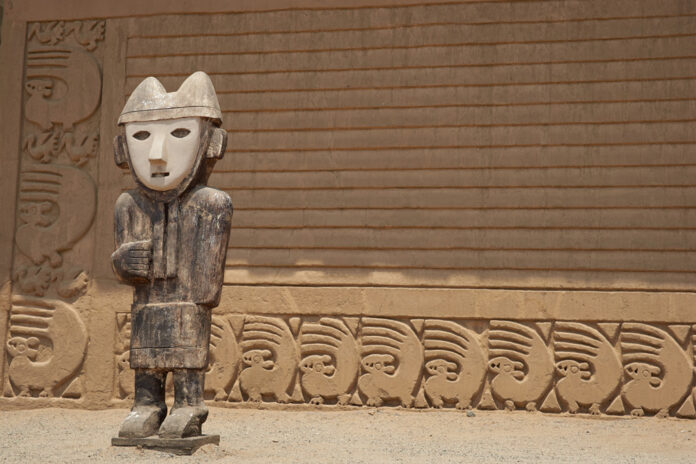 In Peru, right on the Pacific coast, there is a huge clay city of Chan-Chan – the capital of the ancient Indian civilization Chimu (on the map). Its name can be literally translated as “sun-sun”. Chan-Chan was built around 850 and reached its power by the second half of the XIV century. At that time, more than 60 thousand people lived on its territory, and the lands controlled by the city were spread for hundreds of kilometers around. According to scientists, at this time Chan-Chan was the largest metropolis in South America. It differed from neighboring cities in that it was completely built of adobe. This is a building material that is obtained by mixing clay soil and straw. Largely due to this characteristic feature, in 1986 the city was included by UNESCO in the list of the cultural heritage of mankind.

The layout of the clay city was traditional for that time. In the center of Chan-Chan, there were temples, a palace complex, and the tombs of the leaders. City quarters were located around, which were divided into 9 autonomous regions. Along the perimeter of the metropolis, 20-meter walls towered. They not only saved the inhabitants from the enemy but also protected the city from the scorching sun, casting a wide shadow.

On the outskirts of Chan-Chan, there were industrial zones. Here craftsmen were engaged in woodcarving, basket weaving, as well as the manufacture of gold and silver jewelry. The southern outskirts of the city were used for agricultural purposes. Since there was not enough water in the desert area all the time, the residents built a prototype of a modern irrigation (irrigation) system: special water supplies were built to the fields that needed frequent irrigation.

In addition to problems with irrigation, residents of Chan-Chan regularly faced temperature changes. During the day, the air was heated, and at night it became cold. In order to somehow remedy the situation, all buildings in the city were built with a special hole in the roof. Thanks to this technological feature, the room was ventilated, and the temperature remained stable at different times of the day.

Like many other cities of that time, Chan-Chan was plundered several times. This happened for the first time in 1471 after the Inca conquered the settlement. A curious moment: they failed to conquer the city by military means. Using trickery, the conquerors erected a dam and changed the course of the river. Only the lack of water forced the residents to surrender.

60 years after the defeat from the Incas, a new threat appeared – the Spanish colonists led by Francisco Pizarro. They thoroughly destroyed Chan-Chan and removed everything they considered valuable from it. And after that, the city of Trujillo was founded nearby. Chan-Chan never recovered from such a blow. Over the next several centuries, the former capital of the Indian civilization, Chimu, was covered with sand. True, the interest in Chan-Chan from the adventurers did not grow weaker. The Spaniards did not give up their attempts to find the gold of the Indians in the ruins of the old city.

Despite the actions of the colonists and thanks to the dry climate, many clay structures have come down to us in their original form. The best-preserved urban area of ​​Chudi, named for the Swiss explorer Johann Jacob von Chudi. From 1838 to 1843, this scientist and diplomat traveled across Peru, exploring the flora of the Andes.

True, in recent years, global changes in the world climate have led to the fact that more and more precipitation falls in these places. This causes irreparable harm to the historical monument. In addition, the ancient city is threatened by groundwater, the level of which rises every year. Therefore, you should hurry up to make a trip to Peru and see this amazing city with your own eyes.

Today Chan-Chan is an architectural complex that includes 4 archaeological sectors, a museum, and two temples, and all zones are located at a sufficient distance from each other. The city is located 10 kilometers from Trujillo, whose airport receives daily flights from Lima, the capital of Peru. There is no direct flight between Russia and Peru, so tourists will have to change trains in a European country or the United States. You can get from Lima to Trujillo by bus, but you need to be prepared for a difficult journey in the heat, which will take at least 8 hours.

The entrance to the city is paid. The ticket price is 10 soles. You can see Chan-Chan both independently and as part of an excursion group. The second option is preferable for those who do not like long walks under the scorching sun. The fact is that the sights are remote from each other, and having bought a tour for 15 soles, you immediately decide the issue of moving from one sector to another.

Read More About World Heritage Site in the World