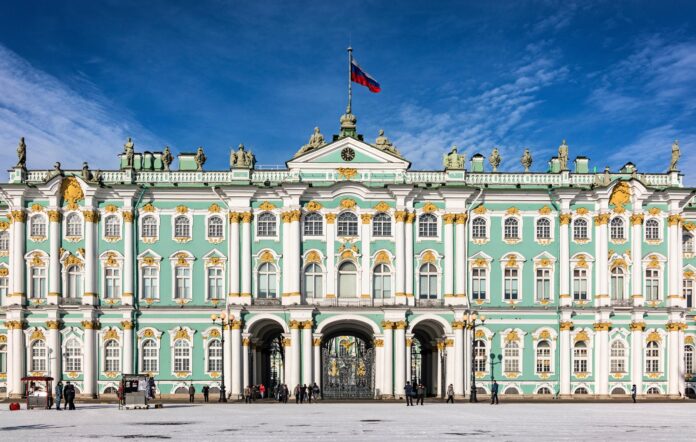 Saint Petersburg is one of the most beautiful and artistically integral cities in the world. The sweep and the Olympic calmness of the water landscape of the northern capital of Russia, its horizontal silhouette with rare “selected” dominants, ensembles of embankments, spaces of wide squares – all this underlies the “imperial” image of Saint Petersburg. However, the historic center of the city is only one of 36 components of the World Heritage Site, which encompasses the entire historical Saint Petersburg agglomeration, the embodiment of Peter’s idea of a “European foothold” in northwest Russia.

The constituent parts of this system are geological ledges and heights, the deep Neva and its delta, the historical center of Petersburg stretching on its banks and islands, imperial residences and noble estates – Peterhof, Oranienbaum, Pushkin (Tsarskoe Selo), Pavlovsk, Gatchina, Strelna, Ropsha, Gostilitsy, palace towns, “promising roads” that have drawn well-groomed fields and parks, fortresses and forts of Kronstadt and Shlisselburg … in urgent restoration. Cultural and natural landscapes are in particular danger, which are losing their value every day under the onslaught of mass construction.

The most elegant of Russian cities attracts with its special character and refined intelligence. And it’s not only about the appearance of St. Petersburg, but also about the touching culture of the indigenous inhabitants of the northern capital, which is often a reason for jokes and pride. It’s hard to believe, but in some places in St. Petersburg – for example, during rush hour in the subway – you can still hear the phrases “I beg your pardon” and “Be kind.” St. Petersburg is perhaps the most ambitious experiment in crossing the European order and Russian soulfulness. It has been going on for the fourth century – it seems quite successful.

Some are ready to sing praises to St. Petersburg around the clock and would give a lot to get here permanently. Others criticize this city for its gloom and depressiveness, for a consistently gray sky and shabby courtyards, a shocking seamy side of the monuments of St. Petersburg architecture.

No one is indifferent to Peter. And even skeptics in their hearts understand that melancholy here is a completely different breed. When heavy clouds in a gloomy noon creep onto the golden spire of the Admiralty, it seems that even without the sun on the banks of the Neva it is possible to exist quite highly cultured. This is not a festivities on Red Square against the backdrop of the Asian Kremlin. Peter, whatever one may say, is Europe, or that very “Euro-window” that the far-sighted Peter I so diligently chopped down.

The Russian emperor was very sensitive to his brainchild. He personally chose the site for Nevsky Prospekt, decided where the Peter and Paul Fortress should be. Trying to “be in trend”, with an eye on Venice and Amsterdam, Peter decided to entangle the city with a network of canals and issued a decree according to which all buildings – a hitherto unprecedented thing in Russia – were to be built only of stone.

Foreign guidebooks, brushing aside the noisy Moscow, put Peter in the first place on their pages. And they hit the target. While in the congested capital you are looking for inexpensive and tolerable housing, in St. Petersburg City, leaving your belongings in a nice hotel in the Five Corners area, you can already climb the huge St. Isaac’s Cathedral, stomp on the deck of the Aurora and get lost in the labyrinths of the Hermitage.

There are legends about the notorious “St. Petersburg spirit”, but even if you decompose it into chemical elements, the secret will not be revealed. For some, Peter is Rastrelli’s baroque architecture, for others – the chants of Zenit fans or gatherings in the Idiot restaurant. But the invariable attribute of the St. Petersburg atmosphere is a fresh sea breeze that flies around the numerous islands in the Neva delta. It is impossible not to catch it.

Q. What is St. Petersburg famous for?

A – St. Petersburg is a mecca of cultural, historical and architectural sites. Established as Russia’s “window on Europe” by Tsar Peter I (the Great), it bears the unofficial status of Russia’s cultural capital and most European city, a distinction it maintains in its perennial competition with Moscow.

Q. Is Leningrad and St. Petersburg the same place?

A – As communism began to decline, Leningrad changed its name back to St. Petersburg. Leaving Lenin’s name meant leaving behind the legacy of the Russian revolutionary leader.

A – The St. Petersburg crime rate is higher than the national average, but it is still the highest in the U.S. St. Pete’s is far safer than many medium-sized and larger cities, with a population of 261,000.

A – Russian is the official language of St. Petersburg, but English is widely spoken. The Russian language uses the Cyrillic alphabet, but many signs in tourist areas are both Russian and English.

Q. What does grad mean in Russian?

A – Grad (Cyrillic: рад) is an Old Slavic word meaning “town”, “town”, “castle” or “fortified settlement”. Initially present in all related languages ​​as Gord, it can still be found in many placenames today as Grad, Gradic, Horod or Gorod.

A – Saint-Petersburg is cheap, while Moscow is absolutely insane with its rates.

Q. Is St Petersburg worth visiting?

A – Yes, it is worth a 4 day stay. There’s a lot to see. If you are staying in the city centre, it is very easy to get around. It is a great pedestrian city and also has a good metro system.

Q. Can you visit St. Petersburg yourself?

A – It’s completely safe – I spent 2.5 days alone in St. Petersburg in June 2016 walking alone late at night. St. Petersburg is the kind of rowdy city where people come in late, have a good time, but I still feel pretty safe there.