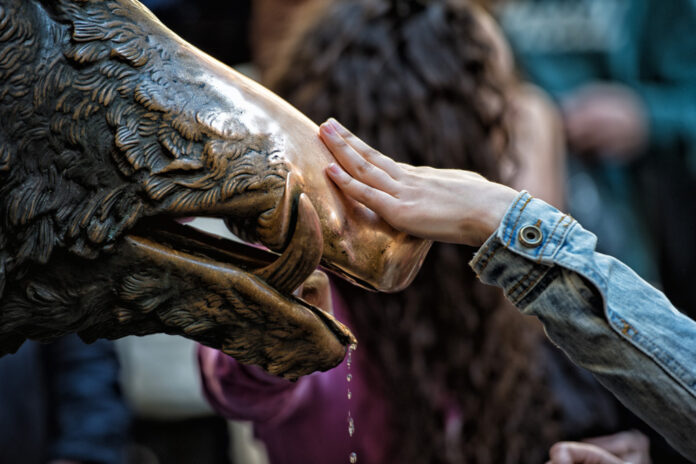 Nobody knows exactly how luck works. However, it is reliably known that fate can meet you anywhere in the world. We have selected 10 monuments for you that are worth touching for everyone who believes in good omens. Here is the List of 10 monuments that bring good luck.

In the Parisian cemetery of Père Lachaise lies Victor Noir, a French journalist who was killed in a duel in the late 19th century. The life-size bronze sculpture depicts a journalist at the time of his death. It is still unknown what the sculptor had in mind, but a bulge in the area of ​​the fly is clearly visible at the bronze monument. According to legend, the deceased in the morgue suddenly had an erection. One way or another, the monument has become an object of pilgrimage: Parisians believe that if you rub a bronze journalist in the area of ​​the bulge, and then kiss him on the forehead, a woman will forever get rid of any problems in the intimate sphere.

The most photographed monument in Las Vegas is a bronze sculpture of dancers turned to the world by priests. The dancers stand next to the Riviera Hotel and almost every hotel guest has a photo next to the showgirls. It is believed that if you rub any of the iron girls on the protruding parts, then in the casino the player will certainly be lucky. Over the years, gambling enthusiasts have rubbed the dancers’ bronze butts to shine. It is not reported how many of them managed to win in the casino after that.

To see one of Milan’s most famous landmarks, you have to look at your feet. In the gallery of Victor Emmanuel II, one of the first shopping centers in the world, the floor of some passages is paved with mosaics. The floor of the central hall of the gallery is decorated with the royal coat of arms, the adjacent corridors are decorated with the coats of arms of Italian cities. The coat of arms of Turin with the image of a bull stands out. According to the omen, if you step with your heel on the underbelly of a bull and turn clockwise three times, it will bring good luck. Because of this belief, the mosaic on the causal site of the bull has long been erased and a rather large depression has formed. However, the administration of the shopping center does not prevent tourists from gaining good luck.

Usually, in order to get something of value, the hero of a fairy tale has to kiss sleeping beauties, at worst – frogs, and almost never – an inanimate object. According to Irish belief, the hero who kisses the stone will gain eloquence.

The most unhygienic European landmark – the Stone of Eloquence – is located in the wall of Blarney Castle, in County Cork. According to legend, the Stone of Eloquence was split from the Skunk Stone, on which the kings of Scotland were crowned in the old days. To earn oratorical talent, it is not enough just to touch the stone with your lips: you need to kiss the stone while lying on your back, holding on to the parapet handrails. Considering that the kissing person is at a height of 20 meters, the Stone of Eloquence can be called one of the most dangerous tourist attractions in Ireland.

The oldest Buddhist temple in Tokyo heals not only the soul but also the body. So, in any case, Japanese guides tell tourists. According to an ancient legend, if you rub a sore spot with incense from a temple, the pain will pass. For the remedy to work for sure, you need to tell the gods about your intention – clapping your hands twice.

Tourists who visit the castle in the German city of Cochem first go up to the room above the fortress gate. You can admire all the other beauties of the former imperial fortress later, but now – urgently tickle the belly of a mermaid with antlers! The mermaid hangs from the ceiling and works as a chandelier. In the Middle Ages, her figure protected the children of the owners of the castle from evil spirits. Kings no longer live here, today the castle is a museum, so the mermaid can only bring good luck to travelers who managed to reach her belly.

7. Stone of the Sun of Intihuatana, Peru

The abandoned city of Machu Picchu in Peru is sometimes called the “city in the sky.” The city is located at an altitude of almost two and a half kilometers above sea level, the temples of Machu Picchu rise above the clouds. Apparently, the Incas built Machu Picchu at such a height to be closer to the Sun. And to “tie” it to a stone pillar.

Intihuatana – a stone to which the Indians symbolically “tied” the sun so that it does not run away from them during the winter solstice, stands on a triangular platform and has the shape of a fist, with a raised finger. Most likely, during the time of the Incas, the Intihuatana served as a sundial. Locals tell tourists that if you rub against a stone, you can see the inhabitants of other worlds.

In any Swedish city, monuments of good fortune are scattered along the streets and footpaths. Typically, manhole covers are labeled here either with the letter “k” (Swedish for kallvatten – clean water) or “a” (avlopp – wastewater). However, romantically inclined Swedes interpret these letters differently. “K” means kärlek – love, “a” means avbruten – broken love. Therefore, superstitious Swedish passers-by while walking carefully look under their feet and either try to step on the hatch with the letter “k” or bypass the hatch with the letter “a”. Well, looking at the Swedes, tourists began to play this game long ago.

In America, a large number of monuments, statues, and memorials have been built in honor of the president-liberator, his portraits are hung in coffee shops, films and cartoons are made about him. The monument at Lincoln’s grave in Springfield is one of the most striking landmarks in the entire state of Illinois. It is believed that if you rub the nose of the sixteenth president of the United States, you will definitely get lucky.

In the center of Florence, on the square of the old market, there is a Kabanchik – a bronze fountain, which is already 400 years old. Finding it is easy. As Hans Christian Andersen wrote in his fairy tale “The Bronze Boar”: “Any visitor can easily find this place, it is enough to ask any beggar about the bronze boar, and he will show the way.” According to tradition, you need to make a wish and put a coin in the mouth of a bronze pig. Falling out of the mouth, the coin should fall into the grate under his hooves. If it falls into the gap, the wish will definitely come true.

Previous article
Chan-Chan, Peru: The amazing clay town
Next article
Finland: What to do in summer and autumn