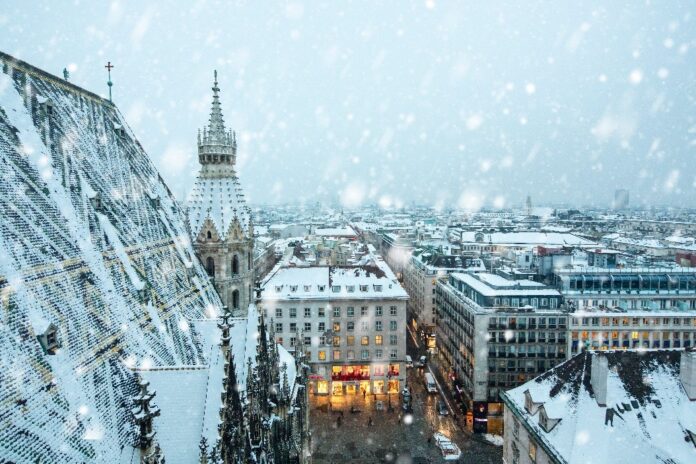 Vienna is an inland city situated on the banks of the Danube river with a topography range from flat to hilly. It has an oceanic climate, meaning that it tends to feature moderately warm summers and cold but relatively dry winters. Nearby mountain ranges and varying altitudes in the greater Vienna area (ranging from around 495 feet to 1,778 feet above sea level) have a significant influence on the local climate.

For those seeking sunny conditions, Vienna can be ideal as the city boasts an annual average of more than 1,900 hours of sunshine. While Vienna’s weather (both on the cold and hot ends of the spectrum) is generally moderate, the city occasionally records scorching heat and frigid temperatures.

Typically, the best time to visit the Austrian capital is from April through early October. Late spring through early fall tends to be especially pleasant, owing to its long, often warm and sunny days and abundant daylight. Fall and winter are also attractive times to visit despite the cold, with events and attractions such as wine harvest festivals, Christmas markets, and year-end holiday decorations.

Spring tends to be on the chilly side, especially in late March and early April when temperatures often remain in the high 40s to low 50s Fahrenheit. Warmer temperatures arrive by May, but so does higher average rainfall. The late spring offers excellent opportunities to try typical Austrian dishes and specialties. The arrival of fresh produce, such as asparagus, to Vienna’s tables and the re-opening of outdoor seating at heurige (wineries and restaurants situated in vineyards just outside the city), mark the start of spring.

What to Pack: Layering is the name of the game in the spring. Make sure to pack plenty of warm and waterproof clothes for chilly, windy, and wet days. Also bring along a few tee-shirts, skirts, and breathable items for warmer ones. Walking and hiking season begins now, so pack a comfortable pair of walking shoes and perhaps a small backpack for a day trip to nearby vineyards or castles.

As summer falls over the city, locals head outdoors and crowd together in parks, squares, markets, and large, pleasant cafe terraces. While the temperatures tend to be moderate during the summer months, Vienna has seen strong heatwaves over the past years, with record temps occasionally exceeding the high 90s Fahrenheit. Days can get muggy and humid and June can bring some of the year’s heaviest rainfall. The days are long in late June and early July, offering ideal conditions for day trips, winery tours, and enjoying the city’s many summer festivals.

What to Pack: Pack plenty of breathable warm-weather clothes, as well as waterproof shoes, a jacket, and a sturdy umbrella to prepare for wet and stormy days. Vienna can get quite cool in the evenings, so we also recommend bringing long pants and long-sleeved shirts even in the warmest periods.

Autumn in Vienna brings gradually lower temperatures starting in late September, with genuinely cold temps generally arriving in late October. The days are still relatively long in September, making for ideal conditions to tour local wineries and sample their latest crop or enjoy local folk festivals. September and October tend to be cool and crisp, with good amounts of sunlight, while early November ushers in shorter days and frequent rain.

What to Pack: Temperatures begin to dip considerably starting in early October, so make sure to pack sweaters, warm trousers, and long-sleeved shirts or blouses for colder days and chilly nights, as well as lighter items for the odd, unusually warm day. Again, always ensure you bring a pair of waterproof shoes (ideally boots) and a jacket, particularly if visiting in late October or November.

During the winter months, average temperatures are generally quite cold to freezing, typically hovering at around 33 degrees F. Occasionally, cold winds from the nearby mountains can contribute to temperatures falling well below freezing. The rainiest winter month is November, while January is the driest. Snowfall is relatively abundant in Austria, and while it can be a bit rarer to see in the capital city than at higher altitudes, it’s a good idea to prepare for icy conditions. Sidewalks and streets can be slick and slippery and “black ice” isn’t uncommon, so be cautious when navigating the city by foot.

What to Pack: Pack plenty of warm sweaters, socks, a good winter coat with a hood, and waterproof shoes or boots with good tread in case of icy conditions. Pack a scarf, hat, and gloves for especially cold days. Also consider bringing a thermos that you can fill with hot coffee, tea, or hot chocolate so you can walk around and see the sights while staying warm.

As mentioned above, snow is often abundant in the winter, and Vienna lies in relatively close reach of areas ideal for winter sports such as downhill and cross-country skiing, snowboarding, and snow-shoeing. There are dozens of ski resorts and areas of outstanding natural beauty that are only a two- to three-hour drive or train ride away from the capital.

One of the closest Alpine mountains, Schneeberg, is only about 90 minutes away from Vienna, in close reach of the town of Puchberg. The mountain range and its popular ski resort are easily accessible by train and bus from central Vienna or you can also take a scenic train called the “Schneebergbahn” to better appreciate the area’s natural beauty and panoramic views any time of year