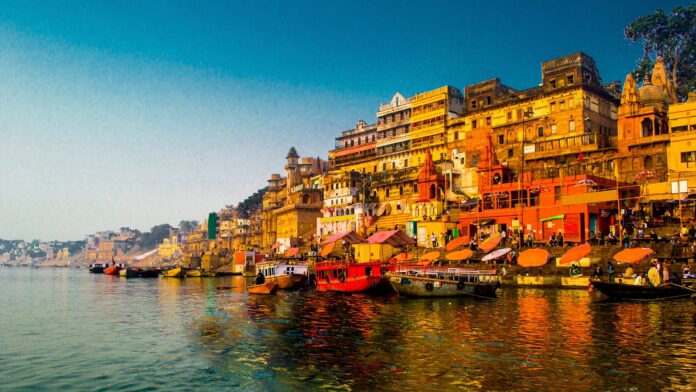 Varanasi is another sacred city in India with a very old history. It could possibly be the world’s oldest inhabited city. Known as the city of Lord Shiva, the god of creation and destruction, it’s believed that anyone who dies in Varanasi will be liberated from the cycle of reincarnation. Even a wash in the Ganges River is said to cleanse away all sins.

Varanasi was originally called Kashi during Vedic times. It was officially named Varanasi in 1956, although it was known as Benaras before that (said to be a variant of Varanasi). The name is derived from the meeting of the Varuna and Assi rivers.

The fascinating thing about this mystical city is that its rituals are revealed openly to along the many riverside ghats, which are used for everything from bathing to burning the bodies of the dead. Yoga, blessings, massages, shaves, and games of cricket are among the other activities you’ll find performed by the river’s edge.

Varanasi is in Uttar Pradesh, about 300 kilometers (186 miles) southeast of the capital Lucknow. The city has an airport and is connected by direct flights from major cities in India including Delhi, Kolkata, Mumbai, Lucknow, and Khajuraho.

Many people choose to travel to Varanasi by train. It takes a minimum of eight hours from Kolkata, 10 to 12 hours from Delhi, and around 30 hours from Mumbai. Most trains run overnight. The main railway station in Varanasi is called Varanasi Junction or Varanasi Cantt (the code is BSB). However, there are two other railway stations in the vicinity of the city — Manduadih (MUV) and Deen Dayal Upadhyaya/Mughal Sarai Junction (MGS). This is important to note if all trains to Varanasi Junction are booked up. Manduadih is within the city, while Deen Dayal Upadhyaya/Mughal Sarai Junction is about 20 kilometers away. Mughal Sarai is a large station that receives a lot of trains, so you may be able to get one with availability. It was officially renamed Pandit Deen Deen Dayal Upadhyaya in 2018.

Bus services to Varanasi tend to be very slow and uncomfortable, and are generally avoidable unless you’re on a super strict budget.

People visit Varanasi for a brush with the divine. One of the best things to do is to simply soak up the atmosphere and observe what’s going on. The most interesting part of the city is its ghats (steps leading down to the river). Take a walk beside the river and watch life flow by.

A quintessential Varanasi experience is a boat trip along the river at sunrise or dusk. It’s worth going twice, at both times, because the atmosphere is different and you’ll see different things. If you don’t fancy hiring a simple rowboat, the new luxury Alaknanda cruise operates twice a day (morning and evening) between in the south Assi Ghat and Raj Ghat in the north. The cost is 750 rupees per person.

The spectacular Ganga Aarti (prayer ceremony) takes place every evening at Dasaswamedh Ghat. You can either be part of the audience or watch it from the river. There’s also an early morning sunrise Ganga Aarti at Assi Ghat. It’s not as formal and provides a less touristy experience.

A look at the cremation ghats, where dead bodies are openly burned on funeral pyres, is eye-opening. It’s best that you don’t try and go there yourself, due to the prevalence of scams and touts (see below). Instead, take this Learning and Burning walking tour offered by Heritage Walk Varanasi or Death and Rebirth in Banaras walking tour offered by Varanasi Walks.

The magnificent Vishwanath Temple, built in 1776, is an important Hindu holy place of worship in Varanasi.

Varanasi is an excellent place to shop for silk (including saris). However, be sure to check the quality as many items are actually made of fake silk or silk blend. Musical instruments are also a good buy in Varanasi.

Varanasi is well-known for classical dance and music, and yoga as well.

Want to see immerse yourself in Varanasi or see it without the hassle? Experience Varanasi, Varanasi Magic, and Varanasi Walk conduct informative experiential and offbeat tours around the city.

Manjeet is an outstanding personal guide who provides customized heritage walks of Varanasi.

If you take a walking tour, you’ll be able to explore the bazaars and unusual attractions, such as the flower market and Ayurvedic herb market. You can also visit artisans, a community of boatmen, and Juna Akhara where an unusual sect of naked sadhus live.

The biggest festival of the year in Varanasi is Dev Deepavali (or Dev Diwali). Not to be confused with Diwali, this festival happens 15 days later, on Kartik Purnima (in October or November). The gods are believed to come to earth to bathe in the Ganges River on this day, and the ghats are decorated with rows and rows of lamps. Their glow creates an evocative spectacle. A five-day Ganga Mahotsav festival is also held in Varanasi at the same time. The focus is on live classical music and dance.

The world’s oldest Ramlila performance, which narrates the life story of Lord Ram, takes place at Ramnagar near Varanasi for a month in the lead-up to Dussehra.

Maha Shivratri is also an extraordinary time to visit Varanasi to see the many sects of sadhus, who come to celebrate the great festival of Lord Shiva in the city.

It’s worth setting aside a day to take a side trip to Sarnath, about 30 minutes away. This is where the Buddha gave his first discourse. In contrast to the craziness of Varanasi, it’s a peaceful place where you can wander around the grassy gardens and ruins of Buddhist stupas.

If you’re interested in handicrafts, you may like to visit the weaver villages around Varanasi. These include Sarai Mohana (supported by the Taj Hotel Group), Kotwa, and Ayodhyapur. Tours are conducted by Holy Voyages and Walks of Varanasi.

What to Eat and Drink

Those who want a break from Indian food will find it at Assi Ghat. Pizzeria Vatika Cafe and Aum Cafe are very popular. The Open Hand Cafe and Shop serves great coffee and yummy light meals and retails their quality ethically-made products.

Head to the Dosa Cafe or Niyati Cafe, in the lane behind Man Mandir Ghat, for simple yet tasty Indian fare.

Blue Lassi is famous for its traditional fruit-flavored lassi yogurt drinks (some say they’re the best in India). This hole-in-the-wall shop has been in business since 1925 en route to Manikarnika Ghat.

It’s wise to avoid trying the street food in Varanasi, due to hit-and-miss hygiene.

As Varanasi is a holy city, alcohol isn’t permitted around the ghats and temples. Many rooftop restaurants do discreetly serve beer to tourists though. You’ll only find bars in mid-range and luxury hotels away from the ghats.

Ideally, stay in a hotel that faces the Ganges River so you can watch all the goings-on along the ghats. However, do be aware that most of these hotels are only accessible on foot. Be sure to factor this in if you have a lot of luggage. Here’s the pick of hotels in Varanasi for all budgets.

Varanasi is a challenging destination for inexperienced travelers. There are many scams to watch out for. The most common one involves touts who will take you to see Manikarnika Ghat (the main cremation ghat) and ask you to donate wood for the funeral pyre — you’ll be paying at least 10 times more than what the wood’s worth. If you offer a small amount, it will be declined. Either way you don’t have any money or don’t feel comfortable giving so much.

Although the government has noticeably cleaned up Varanasi in recent years, it’s still very polluted and dirty. Most tourists find it to be an intense city that confronting and off-putting, yet intriguing. This is a place that will really overwhelm your senses, and not always in a good way. So, do be ready for it! It’s not wise to take a dip in the Ganges River due to the pollution. If you go on a boat ride, avoid getting wet.

When taking photos, do be discrete and considerate of people who are performing rituals. Especially avoid photographing the cremation ghats.

Mahabaleshwar: The land of Strawberries