Sarnath: Place Where the Buddha Delivered His First Sermon 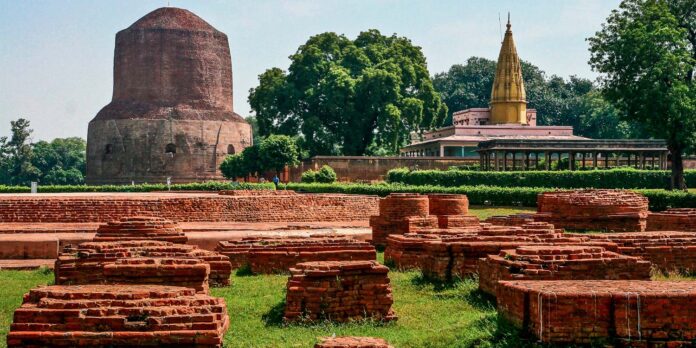 Sarnath (along with Bodhgaya and Kushinagar in India, and Lumbini in Nepal) is one of the four most important Buddhist pilgrimage destinations in the world. It has special significance because it’s the place where the Buddha gave his first sermon. However, you don’t have to be Buddhist to enjoy visiting it. Sarnath also makes a peaceful and refreshing side trip from Varanasi. Many people are surprised to discover Sarnath has Jain and Hindu connections too. Find out what you need to know to visit in this guide.

A long time ago, around the 5th century B.C., a young prince named Siddhartha Guatama was born in Lumbini. He led a very sheltered and lavish life. However, just before he turned 30, he ventured out into the countryside where he encountered illness and death. This prompted him to give everything up and go in search of liberation from suffering.

Eventually, he realized that liberation comes from disciplining the mind. He then sat down to meditate under a sacred fig tree and resolved not to get up until he became enlightened. It happened, profoundly, one full moon night. The tree (which came to be known as the Bodhi tree in the reflection of his awakening) was located at the site of the magnificent Mahabodhi temple in Bodhgaya.

The Buddha didn’t start preaching at Bodhgaya though. There were five people he wanted to teach first. He’d previously practiced physical discipline with them, as a means to liberation. They’d left him in disgust after he decided it wasn’t the right path to liberation. The Buddha heard that they were dwelling in a deer park at Sarnath, so he headed there. They were so impressed with his newfound wisdom and Four Noble Truths that they became his first disciples.

Buddhism flourished in Sarnath due to its proximity to Varanasi. However, most of the structures were built by Mauryan Emperor Ashoka a couple of centuries after the religion was established. Guilt over his brutal invasion of Kalinga (present-day Odisha on India’s east coast) caused him to convert to Buddhism and the practice of nonviolence, and he enthusiastically went about constructing stupas and pillars across India to promote the religion.

The most celebrated pillar is the one at Sarnath. The national emblem of India, featuring four lions and a dharma chakra (the wheel that represents the Buddhist teachings), is derived from it. The chakra also appears on the Indian flag.

Subsequent rulers added to the stupas and monasteries that Ashoka built at Sarnath. During the reign of the Gupta dynasty in the 4th century A.D., Sarnath was an active center of art and Buddhist sculpture. By the 7th century, Sarnath had become a major center for the study of Buddhism, and thousands of monks were living in monasteries there.

Unfortunately, Turkish Muslim invaders arrived in the 12th century and destroyed much of Sarnath, along with many other Buddhist sites in North India. Most of what remained of the Dharmarajika Stupa, made by Ashoka, was further demolished in the late 18th century by Jagat Singh (Dewan of Raja Chet Singh of Banaras) and used as building materials. However, this rediscovery of Sarnath prompted British archeologists to excavate the site in the 19th and 20th centuries.

The Indian government is now in the process of getting Sarnath permanently listed as a UNESCO World Heritage Site, and has plans to develop world-class facilities for pilgrims and tourists.

Sarnath is located about 13 kilometers (8 miles) northeast of Varanasi in Uttar Pradesh. Travel time is about 30-40 minutes.

Sarnath can easily be visited on a half-day trip from Varanasi. There are various ways of getting there depending on your budget. The most convenient way is to take an auto-rickshaw or Ola cab (the Indian version of Uber. Uber is yet to start operating in Varanasi). Expect to pay around 200-300 rupees for an auto-rickshaw and 400-500 rupees for a taxi, one way. Ideally, negotiate the fare for a round trip. Cheaper buses and shared auto-rickshaws are also available from Varanasi Junction railway station.

If you don’t have your own transport in Sarnath, it’s a good idea to hire a bicycle there to be able to see everything.

For a detailed explanation of the history of the monuments, you’ll find plenty of local guides waiting at Sarnath. They charge about 100 rupees, or less if you agree to visit shops where they’ll get a commission.

Avoid visiting Sarnath on Fridays because the museum is closed. Some of the monuments require tickets, which can be purchased online from the Archeological Survey of India here or at the ticket office at the entrance.

What to See There

The main attraction is the Dhamekh stupa complex, where the excavated ruins are located. It’s set in a landscaped park and contains the well-preserved Dhamekh Stupa (at the spot where the Buddha is believed to have delivered his first sermon), plus the remains of Buddhist monasteries, the Ashoka Pillar, and Dharmarajika Stupa. The complex is open daily from dawn until dusk. Tickets for foreigners cost 300 rupees (cash) or 250 rupees (cashless). Indians pay 25 rupees (cash) or 20 rupees (cashless).

A new high-tech sound and light show, inaugurated in November 2020, takes place every evening from 7.30 p.m. to 8 p.m. in the park at Dhamekh stupa. It narrates Lord Buddha’s life and teachings in the enchanting baritone voice of popular Bollywood actor Amitabh Bachchan.

On display at the attractive Sarnath Archaeological Museum, next to the Dhamekh stupa complex, are interesting artifacts dating from the 3rd century B.C. to the 12th century A.D. The impressive top of the Ashoka Pillar is also a highlight. The museum is open daily, except Fridays, from 9 a.m. to 5 p.m. Tickets cost 5 rupees for foreigners and Indians. Photography is not allowed.

Modern-day temples and monasteries belonging to various Buddhist countries are dotted around the town. Each has its own architectural style and beauty. The main one is Mulagandha Kuti Vihar. It was built in 1931 by the Sri Lanka Mahabodhi Society, in honor of the shrine where the Buddha is said to have sat and meditated in Sarnath. It’s open daily from 4 a.m. to 11:30 a.m. and 1:30 p.m. to 8 p.m. The walls are adorned with magnificent art. There’s a park behind it where deer sometimes roam.

The Thai temple and monastery is renowned for its 80 foot-tall stone Buddha statue, claimed to be the largest in India.

Next to the Chaukhandi Stupa, the Garden of Spiritual Wisdom is a new attraction with sculptures and exhibits related to Buddhism. It has a section with Ayurvedic plants as well.

The eleventh Jain tirthankara (spiritual teacher) Shreyanshnath was born in the area. There’s an important 19th-century Jain temple dedicated to him close to the Dhamekh Stupa complex.

What Else to Do Nearby

Lamhi village, about 30 minutes west of Sarnath, is the birthplace of acclaimed Hindi and Urdu writer Munshi Premchand. Cattle farms and agricultural fields can be visited there.

Sarai Mohana village, about 20 minutes south of Sarnath, is home to a local weaving community that makes the famed silk Banarasi saris.