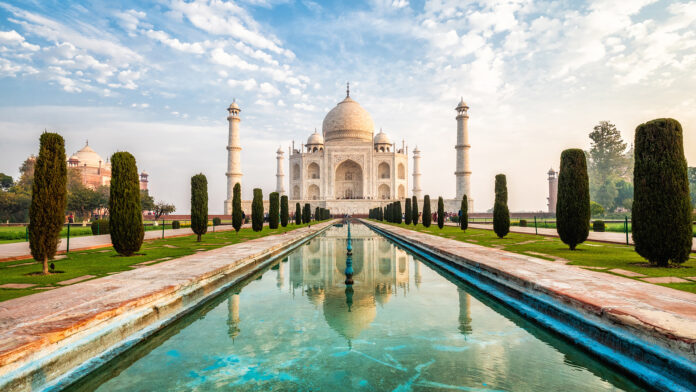 One of the seven wonders of the world, the epitome of love, the Taj Mahal is a huge mausoleum of white marble in the district of Agra in Uttar Pradesh, India. It is one of the most famous buildings around the world which is visited by millions of tourists from across the world every year. A witness to the great historical happenings of the Mughal Era, this construction was built by the Mughal King Shahjahan in memory of his beloved wife Mumtaz Mahal.

Approx. 20,000 stone carvers, craftsperson, and artists were hired from different corners of the country along with artists from Iraq and Turkey. They worked for around 17 years at a stretch to give shape to this wonder. This gorgeous heritage site is set amidst lush greenery and River Yamuna flows at the backdrop of this magnificent site.

The main abode is set on a platform where minarets, the arch-and-dome profile of pristine white marble and intricate designs mesmerize the tourists. The painstaking details on its walls, entrance, and roofs reflect the Pietra Dura form of art and give a detailed idea about the advancement of fine arts in Mughal-ruled India.

Inlaid semi-precious stones are carved in Koranic verse on calligraphy and there is a prevailing belief that these are prayers written in the Arabic language. On both sides of the main mausoleum, two red sandstone buildings look like fine contrasting elements. The building on the western side is a mosque while the other is a guesthouse of Mughal age.

Reasons for Inscription: The reason behind including the Taj Mahal in the list of World Heritage Sites is its unique architecture which has balanced wonderful aesthetic qualities, symmetry, and harmonious blending of different stylish elements and architectural splendor of Indo-Islamic style of construction.

N.B : Night visiting at Taj Mahal starts at 8pm and continues till 12.30 am

Agra is well connected with other parts of the country by all modes of transport. Here is a simple solution to your query how to reach Taj Mahal.

The fastest way of reaching the Taj Mahal (Agra) is by air. Indian Airlines runs daily flights from the capital of the country Delhi to Agra, the city of Taj Mahal. Kheria Airport is the local airport of Agra, which is around 6 km from Agra City Centre.

Reaching the destination by train is one of the easiest ways to reach Agra. The main railway station is Agra Cantonment. The main trains running from Delhi to Agra are the Shatabdi Express, Rajdhani, Taj Express, etc.

Regular bus services are available from Delhi to Agra. By road, Agra is around 203 km from Delhi. Both normal, as well as AC buses, run from Delhi which adds to the comfort of this journey during summer.

Any Taj Mahal information is incomplete without mentioning some interesting details about this place. Being one of the seven wonders of the world itself makes the Taj Mahal location an interesting spot to visit and explore. But here are some of the facts that we didn’t know about earlier. Let’s dig some of them:

Q. Why was the Taj Mahal built?

A. Taj Mahal was built by Shah Jahan in memory of his wife Mumtaz Mahal.Q. How many Taj Mahal are there in India?

A. There is just one Taj Mahal in the world, but there is a replica of the Taj made by Emperor Shah Jahan’s grandson, Prince Aazam Shah. He had built it in the memory of his mother, Dilras Banu Begum. It is known as the Bibi Ka Maqbara which means ‘Tomb of the Lady’. Its resemblance to the Taj Mahal also got it the name ‘Taj of the Deccan’. Bibi Ka Maqbara is located in Aurangabad of Maharashtra.