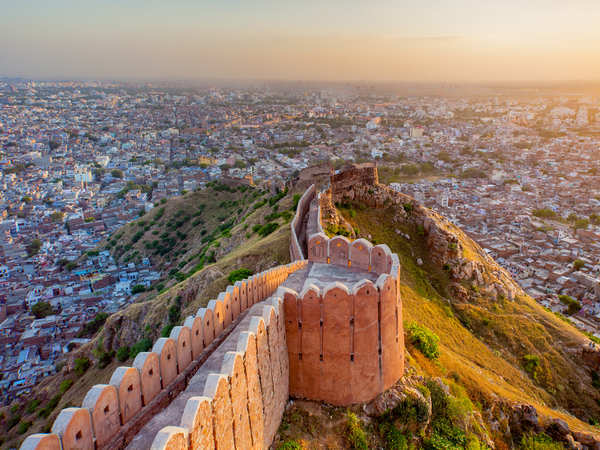 Fondly known as the ‘Pink City’, there are myriad interesting things to do in Jaipur when you are here on a long vacation. The stories of mighty kings and beautiful queens your granny narrated to you as a child comes alive the moment you step in the premises of the majestic Amber Fort and Nahargarh Fort. After exploring these royal architectures, go on a shopping spree at the famous Johri Bazaar, which is quite popular for its meenakari jewelry, and bandhani and block-printed fabric. Dedicate an entire day to the splendid City Palace complex that comprises Chandra Mahal and Mubarak Mahal palaces along with other old buildings. Cinema and art lovers can’t miss out on visiting the Rajmandir Cinema, a prominent tourist attraction in the city, also known as the ‘Pride of Asia’. Those with a religious bend must pay a visit to the spectacular Galtaji Temple, a pre-historic Hindu pilgrimage site, which is also known as the Monkey Temple owing to the presence of many tribes of monkeys in the region.

Galtaji Temple is an ancient Hindu religious center situated around 10 km away from the city of Jaipur. The temple is also known as the Monkey Temple because of the presence of the several tribes of monkeys in the region. Situated in the Aravalli Hills, this age-old temple is surrounded by beautiful trees, freshwater springs, and holy kunds (water tanks). Among these, the Galta Kund is the most important as it never gets dry. Constructed in pink sandstone, the temple showcases spectacular architecture and looks more like a palace than a common religious place. It is believed that taking a dip in the holy water of the kunds here cleanses all sins of a person. A large number of devotees visit here during the Hindu festival of Marar Sankranti to take a holy dip in the ponds.

Watch a movie at the beautiful Rajmandir Cinema

Rajmandir Cinema often referred to as the ‘Pride of Asia’, is a beautiful movie theater in the city of Jaipur opened in the year 1976. Located on Bhagwan Das Road, this meringue-shaped auditorium was designed in Art Moderne style by the famous architect W.M. Namjoshi. A combination of style and opulence, and has hosted premieres of several Hindi films over the years and the first movie that was screened here was the superhit Hindi film ‘Charas’ starring Dharmendra and Hema Malini, on 1st June 1976. The moment you enter the theatre, you will be mesmerized by the gorgeous meringue interiors, the high ceiling walls decorated with beautiful chandeliers, and rising staircases. So, do not miss out on an opportunity of experiencing something different and visit Rajmandir Cinema while in Jaipur.

Located in the old part of the city, the City Palace encloses several palaces, courtyards, and gardens. These have been built over the last two centuries, and are a blend of the Rajput and Mughal architectural styles. The royal family continues to live in a part of the palace, and this impressive complex still exudes a regal aura.

Your first major stop inside will be the Maharaja Sawai Man Singh II Museum, which has a good collection of royal costumes, weapons, miniature paintings, manuscripts, and sculptures. Other highlights include the Diwan-i-Am or the Hall of Public Audience, where durbars (royal courts) were held, and which still has painted walls and ceiling, marble pillars, and glass chandeliers. Another hall, the Diwan-i-Khas, was used during ceremonies and exhibits the largest silver water containers in the world.

Enjoy the city lights from the splendid Nahargarh Fort

Reminiscent of Jaipur’s royal past, the 18th-century Nahargarh Fort once formed a strong defense for the city of Jaipur. A walk through its massive gates, beautifully-crafted temples, and large courtyards will transport you back to the time of the maharajas. Considered to be one of the best vantage points in the pink city, the fort’s crown offers spectacular vistas of Jaipur and the serene Man Sagar Lake. A peaceful escape from the hustle and bustle of the city, the fort is built amidst the majestic Aravalli range and also has accommodation facilities for those who want to extend their visit.

Shop till you drop at the famous Johri Bazaar

Also known as the jewellers’ market, Johari Bazaar consists of rows upon rows of jewellery shops. Head to the jewellers’ street known as Gopalji ka Raasta, where you can buy colourful meenakari jewellery, a local speciality made with glazed enamel work. Johari Bazaar is also famous for bandhani and block-printed textiles, so be prepared to browse through a dazzling range of patterns and stock up on colourful fabrics. While you’re there, don’t forget to drop into Laxmi Mishthan Bhandar, widely considered to be Jaipur’s best sweet shop.

This hilltop fort complex lies on the dusty Aravalli hill range, 11 km outside Jaipur. It was the capital of the Rajputs for 700 years and the original residence of the royal family before Jaipur was constructed. Built-in a combination of Hindu and Islamic architectural elements, it encloses pretty palaces, imposing gates, and several official buildings. These are decorated with wall murals, carvings, and mirror and glasswork. Take a moment to admire the magnificent inlay work in the Sheesh Mahal or Hall of Mirrors. The fort truly comes alive in the evenings with a light and sound show, which narrates its history in Hindi and English.

Is Jaipur safe after the spread of the deadly pandemic?

Tourists must be careful enough to take every necessary measures as instructed by the doctors while travelling to remain safe from COVID.

What are the options for quarantine facilities in Jaipur?

There are many hotels with quarantine facilities in Jaipur as designated by the Government of India. Some of the options are as below – 1. Radisson Blu 2. Crowne Plaza 3. Clarks Amer

Is Jaipur a good place to visit?

Yes, a holiday in Jaipur will definitely be worthwhile. There are various tourist attractions in the city that you must visit for a memorable travel experience, including City Palace, Jal Mahal, Amer Fort, Nahargarh Fort, Jaigarh Fort, and more.

Where should I stay in Jaipur?

There are various options in the city of Jaipur where you can have a hassle-free stay experience. Some of the options are: Bani Park Hotel, Krishna Palace, Lake Palace Hotel, Hotel Jaipur Kothi, Sunder Palace Guest House, Hotel Pearl Palace, and The Pearl.

Is Metro available in Jaipur?

Yes. The Jaipur Metro is considered to be the sixth local travel medium after these 5 metros – Kolkata Metro, Delhi Metro, Namma Metro, Rapid Metro Gurgaon, as well as Mumbai Metro.

What are the places to visit in Jaipur at night?

Jaipur is absolutely gorgeous at night. Some of the places to visit in Jaipur at night are Chokhi Dhani, Jal Mahal, Hawa Mahal and more. One can also enjoy pub hopping or go for long night walks.

What are the places to visit in Jaipur in two days?

One can cover all the prominent places in Jaipur in 2 days. Some of the places you can cover in Jaipur in two days are City Palace, Jal Mahal, Nahargarh Fort, Amer Fort and many more.

Which is the most popular fort in Jaipur?

Amer Fort is one of the most popular forts in Jaipur, followed by Nahargarh Fort, Jaigarh Fort, etc.

Which is the best place for shopping in Jaipur?

Jaipur is a paradise for shopaholics. Johari Bazaar, Tripolia Bazaar, Nehru Bazaar and Bapu Bazaar are the best places for shopping in Jaipur.

What can we do in Jaipur at night?

Jaipur is not only marvelous in the day but it turns into a beautiful royal place at night. One can head to Amber Fort to witness the Light and Sound Show, explore Jawahar Circle Garden, or even head to Masala Chowk to relish tasty dishes.

What is the best time to visit Jaipur?

October to March is considered as the best time to explore Jaipur as the weather remains cooler in comparison to other months. Moreover, one can also be a part of several festivals that are hosted in this city like Jaipur Literature Fest (in January).

How far is Jaipur from Delhi?

Jaipur is situated at a distance of approximately 273 km from Delhi that can be covered via roadways or railways. Driving can take up to 5 hours and the train takes 3-4 hours.

Jaipur is considered a safe place for solo female travelers and you will find many backpackers in the city, especially during the Jaipur Literature Festival. However, it is advised to stay alert at a new place and avoid shady areas late at night.

What are some top Jaipur street foods?

You can taste Gol Gappa, Pyaaz Kachori, Kathi Roll, Shrikhand, and Falahaar which serve as the main street foods in Jaipur.

What are the 3 most famous foods?

There is no dearth of options to explore for foodies in Jaipur. The 3 top foods that you can explore in Jaipur include Dal Bathi Churma, Ghevar, and Ker Sangri.

What popular non-veg foods should we eat?

Previous article
Belgium – How to Get Around Like a Local
Next article
Taj Mahal – The Ultimate Guide (Tours, Festivals & Travel Tips)