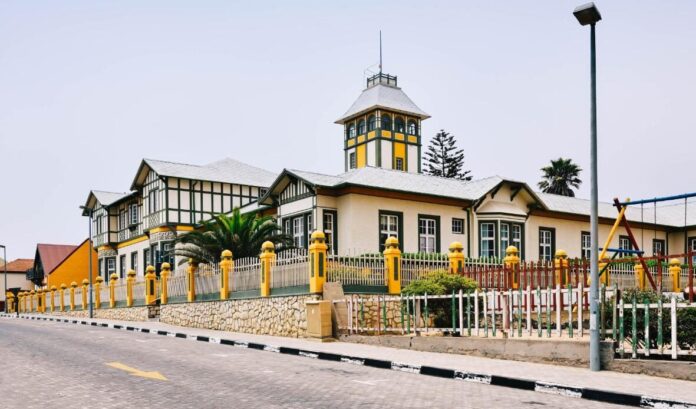 The beach resort of Swakopmund is situated on Namibia’s Atlantic coast, approximately 219 miles (352 kilometers) due west of Windhoek. It is surrounded on three sides by the Namib Desert, and by towering golden dunes that plunge dramatically into the deep blue sea. It’s also the gateway to the Skeleton Coast, making it a haven for adventure seekers and adrenalin junkies, backpackers, and overland road-trippers. The town itself is steeped in German colonial culture, from its cuisine to striking architectural landmarks like the Woermannhaus and the Kaiserliches Bezirksgericht. Travelers come to soak up the atmosphere and to take part in activities that range from sandboarding to skydiving.

The town was founded in 1892 by Curt von François, the commissioner of Germany’s imperial colonial army. Von François (who also founded Windhoek two years previously) chose Swakopmund as the main harbor of German South West Africa on account of its abundant fresh water. Its name translates from the German for “Mouth of the Swakop.” The town received municipal status in 1909 but saw a decline in 1915 when German South West Africa was taken over by the Union of South Africa, and harbor operations were moved south to Walvis Bay. In 1990 Swakopmund gained independence along with the rest of Namibia and has been growing as a tourist hub and resort town ever since.

Top Things to Do

Swakopmund has earned itself a reputation as Namibia’s adventure capital, and as such, visitors are spoiled for choice in terms of things to do. Options range from relaxing or fishing on the beach, to riding camels at the Swakopmund Camel Farm or admiring the world’s largest cluster of quartz crystals at the downtown Kristall Galerie. The most popular pastimes are listed below.

Located near the beach in the center of town, Swakopmund Museum is the largest privately run museum in Namibia. Its displays include examples of indigenous plants, taxidermied desert animals, and artifacts relating to the region’s native and colonial inhabitants. Of particular interest is the People of Namibia exhibit, which offers an insight into the traditional heritage of Namibia’s many different ethnic groups, from the Herero to the Himba. The museum is open every day from 10 a.m. to 5 p.m. Tickets cost 30 Namibian dollars (around $2) for adults and 10 Namibian dollars (around 68 cents) for children.

Namibia’s only aquarium showcases the fascinating marine life of the cold Benguela Current. Wander through an underwater walkway that affords close-up views of rays and sharks, or find yourself enchanted by the playful antics of the aquarium’s African penguins and Cape fur seals. Keen fishermen can also get an idea of the species that can be caught off Swakopmund’s beaches, including spotted grunter, silver cob, and west coast steenbras. The aquarium is open Tuesdays through Saturdays, from 10 a.m. to 4 p.m.

Most visitors will want to make a trip into the surrounding Namib Desert, and there are many different ways to do so. Companies like Living Desert Adventures offer 4×4 Land Rover and Landcruiser safaris, which take you through the spectacular dunes in search of rare desert fauna, including the transparent Namib dune gecko desert chameleons, and sidewinder snakes. You can also explore by bicycle, courtesy of Swakopmund Fat Bike Tours, go sandboarding or head out on an adrenalin-fuelled quad-bike tour with Desert Explorers.

For an aerial view of the collision between sand and sea, you could sign up for a scenic flight. Alternatively, you could opt to throw yourself out of a perfectly functional aircraft with the Swakopmund Skydiving Club. Based at Swakopmund Airport, the company offers tandem skydives from 10,000 feet, with a 35-second free fall and a five-minute canopy ride. If you’re feeling courageous, you can even opt for a full day of training followed by a solo static line or free fall jump! Tandem skydives cost 2,500 Namibian dollars ($169) per person, with added costs for film footage.

Many companies offer exciting day tours from Swakopmund. Head south to Walvis Bay and embark upon a harbor cruise for the chance to see Cape fur seals, African penguins, and three species of dolphin (including the endemic Heaviside’s dolphin) up close. Birding trips take you to the Walvis Bay Lagoon, where thousands of lesser and greater flamingoes congregate, and coastal rarities like the Damara tern may be spotted. North of Swakopmund lies the Cape Cross seal colony, one of the largest in the world. En route, you’ll stop to see Skeleton Coast shipwreck, the Zeila.

Swakopmund’s culinary scene is cosmopolitan with restaurants serving Indian, Italian, African, and Portuguese fare. German cuisine is a highlight, though, with top spots including the Strand Hotel’s Brewer & Butcher and Swakopmund Brauhaus. The former serves schnitzel and schweinshaxe alongside microbrews made at the in-house brewery. You can enjoy your meal on an outdoor terrace overlooking the water, or in front of big indoor sports screens. At Swakopmund Brauhaus, the Bavarian decor and German draught beers make it easy to forget you’re in Africa. For authentic German pastries and confectionary, pay a visit to Café Anton.

Whether you’re a backpacker on a budget or a luxury traveler with cash to spare, there’s accommodation for everyone in Swakopmund. The most upscale option is probably Strand Hotel Swakopmund, which offers a scenic location on the Mole, Swakopmund’s historic sea wall. It’s surrounded by water on three sides and offers immaculately decorated rooms and suites in addition to a spa and three of the town’s best restaurants. Beach Lodge Swakopmund is an excellent midscale choice, with a beachfront location and a boutique feel. It has just 19 rooms (including two specifically for families) and a fantastic second-floor seafood restaurant.

Cornerstone Guesthouse is the top-ranked B&B choice on TripAdvisor and also offers beautiful self-catering apartments. It’s located in the old town within walking distance of the beach and top tourist attractions. For budget travelers, it’s hard to go wrong at Swakopmund Backpackers. Here, you’ll find affordable dormitories and private rooms, a self-catering kitchen and a garden complete with a barbecue area—perfect for braaing and swapping stories with your fellow travelers.

Weather & When to Go

Although Swakopmund has a desert climate with very little rain (less than .78 inches per annum), its proximity to the frigid Atlantic means that temperatures are consistently mild all year round. Average air temperatures range from 59 degrees F (15 degrees C) in winter to 77 degrees F (25 degrees C) in summer, and the sea is always cold. Fog is a defining feature of Swakopmund’s weather and can be present for more than 180 days of the year. It reaches many miles inland and is one of the main reasons for the shipwrecks that litter the Skeleton Coast. Although the town is a year-round destination, the best time to visit is during the Namibian summer (November to February) when the weather is warmest.

Because Namibia is a popular self-drive destination, most visitors arrive in Swakopmund by road. It is 219 miles (352 kilometers) west of Windhoek on the B2, and 27 miles (43 kilometers) north of Walvis Bay on the same road. If you’re traveling southwards from Hentiesbaai, you’ll drive on the C34 for 47 miles (75 kilometers). For those that don’t have their own vehicle, private shuttle bus service Town Hoppers offers a daily route in between Windhoek and Swakopmund. You can opt for door-to-door or bus stop-to-bus stop service, with rates starting from 230 Namibian dollars ($15) per person.

Swakopmund Airport (SWP) is used exclusively for charter flights and is not serviced by the national carrier, Air Namibia. Instead, it’s usually cheaper to catch the daily scheduled flight to Walvis Bay from Windhoek and then travel on to Swakopmund by bus or taxi. The Desert Express train service offers luxury overnight journeys from Windhoek, with meals and excursions en route included.

Q. How is swakopmund namibia weather?

A. The climate in Swakopmund is comfortable and mostly clear. Over the course of the year, the temperature typically varies from 50°F to 73°F and is rarely below 45°F or above 88°F.

Q. What are the options for swakopmund namibia accommodation?

A. There are many options available few of the best are listed below –

Q. What is the swakopmund namibia airport’s name?

A. Swakopmund Airport (IATA: SWP, ICAO: FYSM) is a non-towered airport serving Swakopmund, a city in the Erongo Region of Namibia.