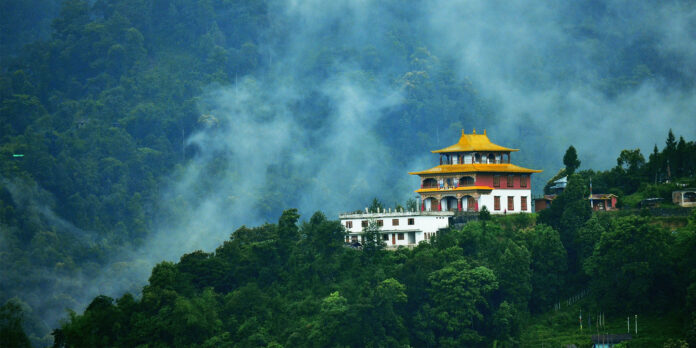 Sikkim is an Indian state in the North East of the country. This state is legendary for its peaceful nature, its simplicity, and the mesmeric charm of its vibrant culture. This place is nice but the people of Sikkim are nicer. We get to explore some really impressive hospitality from this place.

The Himalayan state borders Chinese Tibet in the North, Nepal in the West, the Indian state of West Bengal in the south, and Bhutan in the East. The state is also famous for dazzling waterfalls, forests, Tibetan-style Buddhist Gompas, alpine meadows, and an outstanding range of pristine natural beauty of Himalayan hill town and of course Kanchenjunga; The Third highest peak in the world at 8586m. After visiting there once I’ve no doubts why Sikkim is a dream destination of many people.

Important Sightseeing Places
• Kanchenjunga falls is The most stunning of all places.
• Changgu lake: Which is frozen most of the time and it’s mesmerizing.
• Ban jhakri falls park: There are some adventure rides as well apart from those beautiful falls.
• Monastery
• Ganeshtok
• Tashi viewpoint
• Teesta River
• Seven Sister waterfall

Sikkim is not just famous for its beautiful mountains but it is also famous for its local cuisine which is influenced by its neighborhood like – Tibet, Nepal, and Bhutan. Sikkimese cuisine has rice and maize mainly, apart from this Thukpa and Momos are also worth trying.

As Gangtok is a bustling town spread over several mountain ranges. Mahatma Gandhi Marg is the main shopping area. The best part of this street is vehicles are not allowed there to avoid unnecessary traffic. We used to have our evening walks there because the streets were really well maintained, and clean, and also there were many attractive local arts representing their heritage. Everything was beautiful.

In 5 days you can visit different places, witness incredibly beautiful views and many fun activities. Also, the locals, there are really sweet, calm, cooperative, and friendly. Sikkim is the doorway to heaven, Sikkim is definitely one of the best places one should visit at least once in a lifetime.

Q. What is Sikkim famous for?

A – Sikkim is located in the northeastern part of India but is not part of the Seven Sister States. The state is famous for dazzling waterfalls, virgin forests, Tibetan-style Buddhist gompas, alpine meadows, rhododendron flowers, and much more. It was merged with India in 1975 and today it is a prosperous state.

Q. What is special in Sikkim?

A – A part of the Eastern Himalayas, Sikkim is notable for its biodiversity, which includes alpine and subtropical climates, as well as being host to Kangchenjunga, the highest peak in India and the third-highest peak on Earth. The capital and largest city of Sikkim is Gangtok. It became a princely state of British India in 1890.

Q. What is the best time to visit Sikkim?

A – As suggested by Sikkim Tourism, the best time to visit Sikkim is either between March and May or October and mid-December. If you want to witness the natural beauty in bloom in Gangtok, then the best season to visit would be in the spring, from March to May. On the other hand, autumn brings a clear view of the Himalayan ranges.

Q. Is Sikkim safe for couples?

A – Sikkim has long been a safe home for honeymooners who want to lose all sense of direction in the harmony and mystery of the mountains of the Upper East. Each season in this sloping state paints its towns and cities in different colors, making them look more mysterious and lovely than any other place in the country.

Q. Why is Sikkim so prosperous?

A – Sikkim is the third richest state in India (after Delhi and Chandigarh) by per capita income. Its literacy rate is the seventh-highest in India. In 2008, it was declared India’s first open defecation-free state. Behind the prosperity and cleanliness of the state, we found the state engulfed in drugs and suicides.

Q. What can I buy in Sikkim?

A – Souvenirs to Shop While in Sikkim –

A – An important pilgrimage place, Gangtok is also a major center of tourism in the state. Due to a lack of budget transport options, hilly terrain, and many other factors, a trip to Gangtok can be costly for budget travelers.