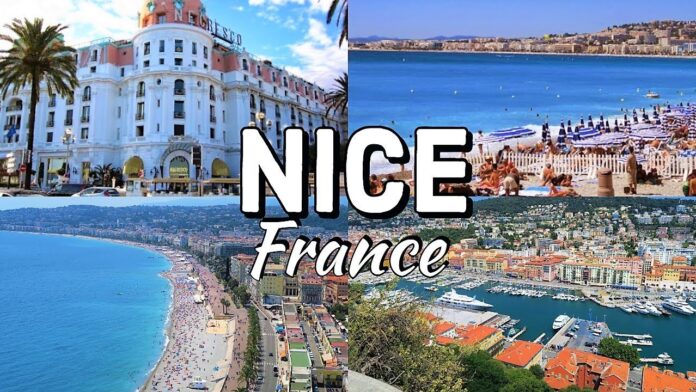 Nice France is a wonderful French Riviera city, and a popular destination for couples, honeymooners, and sun-worshippers. However, it’s a big city, and it can be hard to master. Find out all the basics of a good vacation, including what to do, what to see, where to stay, great day-trips and how to get around.

Nice is well served by Nice-Cte d’Azur Airport, west of the city. It is an international airport, so there are flights from over 100 destinations, including New York. London, UK, Paris and USA See my information guide on how to get there. It is a delightful trip and makes a great start to a holiday on the Cote d’Azur.

There are several shuttle buses and local bus services to Nice and other Riviera cities, as well as plenty of taxis to take you into the city upon arrival. If you’re traveling by rail, Nice has three train stations but you’ll probably arrive in Nice Ville’s main terminal. This will put you a few blocks north of the beach.

Train Station and Travel
There are many connections from Nice railway station to other cities in France and also to Italy which is a short distance away.

Bus Lines
The major bus system in Nice is the Lignes d’Azur which operates to and from the airport and other nearby towns as well. They operate over 130 bus routes in 49 cities that make up the entire Metropol Nice Côte d’Azur region.

There are other regional buses to nearby towns, and most stop at Gare Routier, north of Place Massena. With the most frequent stops at Nice Ville station, there are rail connections to most neighboring towns as well. Nice also has Noctambus which operates 5 night bus routes from 9.10 pm to 10.10 am, but they are not very frequent.

There is also a tram. Number 1, a 9.2 km line that runs from north to east and runs through the city center along the Avenue Jean Médacine and passes through Place Massena daily from 4.25am to 1.35pm.

Buy a single ticket for travel that allows conversion within 74 minutes to EUR 1.50 and other very good value tickets for stays of different durations.

You can get a system map and a brochure listing timetables at the tourism office on the Promenade des Anglais or at the main bus station at Place Massena.

You can rent a car, but first check to see if your hotel has parking and what it costs. Parking a car in Nice can be difficult, if not impossible. If you are in Nice from another part of France by car, consider leaving the car at one of the 5 ‘Parc relais’ or stop-over car parks outside the centre. It’s free to use and you can then take the tram to the city center.

There are countless things to see and do in this city, whether in the heart of the city (Nice Centre), beaches, or in the hills that stretch behind the main city (Les Collins).

Here are a small selection of some favorite places to see and things to do:

Read More About Nice France – Nice Things to Do

There are countless hotels in Nice, and an unusually high number of four-star accommodations. But for a feast try Hotel Windsor, a short walk to the beach and pedestrian area, and a short walk to Court Celaya and the old town. The rooms are reasonably priced, and the staff are most helpful. The rooms also have their own personality, decorated by most artists and unique murals. Be sure to request a room with a balcony.

Hotel Negresco is probably the most famous hotel in Nice. Almost any photo of the Nice coastline would be punctuated by the hotel’s Art Deco façade. A National Historic Monument, this ocean-facing Hotel Nicoise is the epitome of elegance.​

Q. What is Nice famous for?

A – It is known for its spectacular climate, spectacular beaches and spectacular scenery with beautiful beaches. Also for its stunning architecture with Belle Epoch and Baroque influenced buildings.

A – The prices of food and attractions are quite reasonable for Western Europe, but accommodation (especially hostels) can be expensive.

Q. Where is Nice in France?

A – Seaport City, Mediterranean Tourist Center, and the capital of the Alps-Maritimes Department, Provence-Alpes-Côte-Dézur Region, southeastern France. The city is located on Bay des Bay Engage, 20 miles (32 km) from the Italian border.

A – Overall its a safe city, and France usually has a low rate of violent crime, but some neighborhoods with most large cities take extra precautions especially when traveling after dark. There has been a drop in overall crime in France in recent years, but visitors should be careful on the move.

Q. Is Nice worth visiting?

A – With a warm year-round climate, a delectable Old Town, great food, and loads of things, City is worth visiting again and again. Nice is a metropolitan, vibrant city located on the French Riviera in the south of France.

Q. Is food expensive in Nice ?

A – While the price of food in Nice can vary, the average cost of a meal is € 39 per day. Based on the spending habits of previous travelers, when eating an average meal in Nice it should cost around 16 € per person. Breakfast prices are usually slightly cheaper than lunch or dinner.

A – Pearls of France is located in the center of the French Riviera, and if you decide to buy the villa of your dreams near the beach, you will have to dig deep into your pocket. This is because Nice is considered the most expensive of all the cities on the Mediterranean coast of France.

Q. What is the best time to visit Nice France?

A – The best time to visit is in the shoulder season of September to October, or mid-March to April when you can invest capital at low room rates.

Q. How cold is it in Nice France?

Q. Does Nice get Snowfall?

A – 6–7 days of rain a month is expected during the winter, and perhaps snow dust blows once every two years (although you can drive 90 minutes and spend hours scooping at an Alpine ski resort! )

Q. Do they speak English in Nice?

A – The most popular option for a “sandy” beach outside Nice: it’s only 20 minutes on the bus, or a super quick motorcycle ride. It is about a 15-minute walk and runs through the Old Town from the bus stop (bus 81 or 100, stop Octroi), but the train drops right above the beach.

Q. Does Nice have beautiful beaches?

A – If you like shiny seas, long pebble beaches and an endless supply of cocktails, then there is nothing nicer than Nice. In fact, the section includes over 30 different beaches, 20 of which are public, 15 private and all with something special to separate them.

Q. How far is Nice from Paris by train?

Q. What is the best way to travel from Paris to Nice?

A – If you want to travel from Paris to Nice to France, you can travel by airplane, bus or train. Flying is the fastest route to Nice, but there is also a high-speed TGV train route that goes through Marseille.

Q. How far is it to the car from Paris?

A – The distance from Paris to Nice Drive is 930 kilometers, with some amazing stops depending on the rut you choose.

Q. Where will you fly to Nice France?