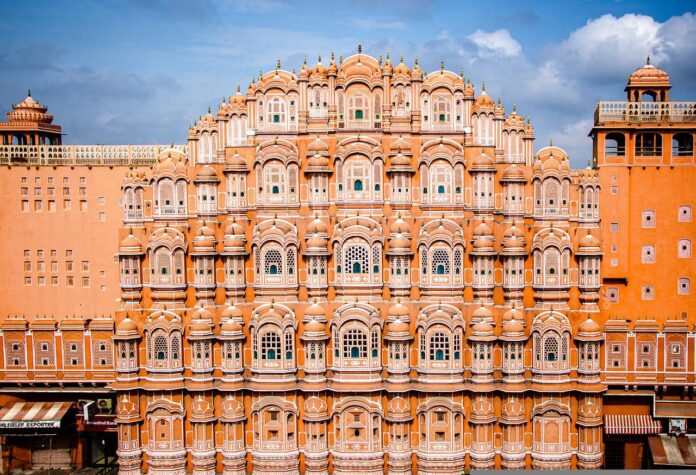 The huge building of Hawa Mahal stands at the crossroads of Badi Chaupar, the main road in Jaipur, and was built by Maharaja Sawai Pratap Singh in the year 1799. Hawa Mahal derives its name from its unique structure, which is a mesh of small windows. Allowed cool air to enter the palace and therefore kept the palace comfortable during the hot summer months. The main reason behind the construction of the palace was to allow the women of the royal household to celebrate in the streets when overlooked from the outside as was the custom of the land. This City Palace is situated on the right side of Jaipur and extends up to ‘Jenana’.

Hawa Mahal is a structure made of red and pink sandstone and has a pyramidal structure that almost resembles a crown. It is embellished with 953 small windows, also known as ‘Jharokhas’, and decorated with lavish latticework. From within, the Hawa Mahal palace is based on five storeys, each with a uniquely decorated chamber. A charming fountain welcomes you inside the main palace, from where you can make your way up to the different floors. The top of the palace offers a spectacular view of the City Palace, Jantar Mantar, and the always-busy Sirdeori Bazaar. There is also a small museum which has some rich relics and miniature paintings.

Hawa Mahal was built in 1799 by Maharaja Sawai Pratap Singh as a continuation of the royal City Palace and was designed by Lal Chand Ustad as the crown of Krishna. In those days Rajputs followed the purdah system and the royal women did not appear before the public. As they wanted to observe the day-to-day events, Hawa Mahal was built with extremely small windows and screened balconies to provide a sense of freedom among women.

The architecture of Hawa Mahal

The reason behind the naming of Hawa Mahal is the structure of the building. It is a unique five-storey palace that looks like a honeycomb due to its 953 small windows called jharokhas, and these windows let air in and help keep the palace cool. Hawa Mahal is the tallest building in the world without a foundation and due to the lack of one, the palace is tilted at an angle of 87 degrees. Hawa Mahal stands at a height of 50 feet above the ground and has small portholes with miniature windows and sandstone grilles. There are no stairs inside the building and one needs to climb a ramp to reach the top.

To enter the palace, you have to go through a royal door which is located on the left side of the building. This gives way to a large courtyard consisting of three two-story buildings to the left, right, and center. The upper three floors of the Hawa Mahal have the width of only one room, while the first and second floors have courtyards in front. The rooms are decorated with stained glass mosaics, ornamental stonework, and ‘chhatris’ which are a part of the traditional Rajasthani architecture.

There are several small shops located just outside the palace complex, where you can buy a variety of gift items as well as items of daily use. This huge shopping area is known as Badi Chaupal or Manek Chowk and is a central point of the city. Articles like traditional clothes, jewellery, showpieces, vases, traditional shoes or ‘jutti’, key chains, and many such items are easily available here. You can also buy dress materials along with Jaipuri prints, sarees, jewellery, handicrafts, Rajasthani furniture, and antiques here. Many street vendors also sell delicious snacks like golgappas, bhelpuri, samosas, and kachoris which are extremely tasty. There is a cafe in front of Hawa Mahal which offers a splendid view of this architectural marvel.

Q. Why is Hawa Mahal famous?

A – Hawa Mahal, literally the Palace of the Winds was built by Maharaja Sawai Pratap Singh in 1799 using pink sandstone and is the most recognizable monument of Jaipur. This unique five-storey structure with small lattice windows (called jharokhas) is a fusion of Hindu and Islamic architecture.

Q. Can we go inside Hawa Mahal?

A – Yes, you can enter Hawa Mahal. But you cannot shop in it, but there is nothing to worry about around Hawa Mahal, there is a big market for shopping.

Q. What is the story of Hawa Mahal?

A – Hawa Mahal was built by Kachwaha Rajput ruler Maharaja Sawai Pratap Singh in the year 1799. When the Maharaja saw the structure of the Khetri Mahal in Jhunjhunu, Rajasthan, he was so impressed that he decided to build a palace on it. Hawa Mahal, also known as the Palace of Hawa, was the result of that inspiration.

A – Ghosts of Hawa Mahal. While the Hawa Mahal is not actually included in the popular list of haunted monuments in India, and there does not seem to be any written record of any paranormal activities, local guides sometimes refer to the ‘past presence of queens’.

A – Hawa Mahal (Palace of the Wind) remains closed on Fridays due to Friday prayers. The mosque is very close to Hawa Mahal and people offer prayers on the road in front of Hawa Mahal.

Q. Why is it called Hawa Mahal?

A – Due to being quite windy, this palace was named ‘Hawa Mahal. Its architecture and design include lots of windows, jharokhas, and latticework which makes it well ventilated and adds to the free flow of air.

Q. Which rock is used in Hawa Mahal?

A – Constructed of red and pink sandstone, the palace is situated on the edge of the City Palace, Jaipur.