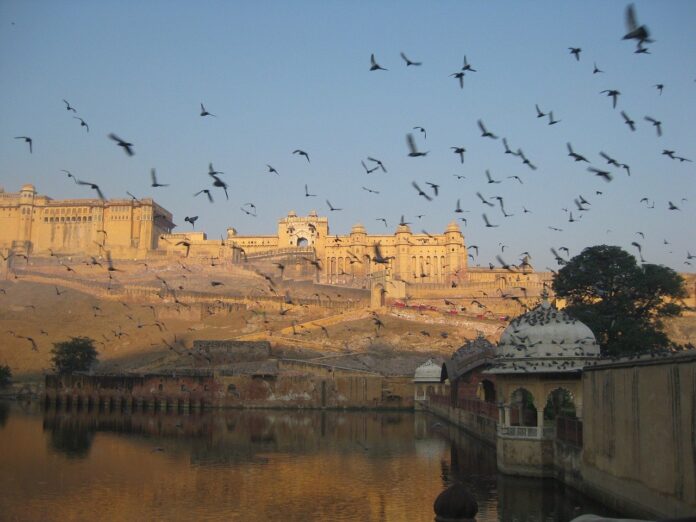 Amer Fort, situated on top of a hill near Jaipur, is one of the most magnificent palaces in India. Also commonly known as the Amber Fort, this majestic building with its maze-like passages and serpentine staircases is an architectural masterpiece and holds significant importance in Indian history. Only 11 km from Jaipur, Amer Fort is made of pink and yellow sandstone and is part of a wider complex. Built-in the year 1592 by one of Akbar’s most trusted generals, Maharaja Man Singh I, the Amer Fort served as the main residence of the Rajput rulers.

The Amer Fort with its large ramparts, numerous gateways, and paved paths overlooks the Maotha Lake in the city of Amer, which served as the capital of the erstwhile princely state of Jaipur. The fort is so big that it will take you at least two to three hours to see it in detail, and you also have the option of taking advantage of audio guides to take you through this fascinating building explaining the history of the place. can choose. Taking an elephant ride on the steps of Amer Fort is also a popular tourist activity. The fort sees over five thousand visitors daily and in the true sense, the Amer Fort was included in the UNESCO World Heritage Site list as part of the “Hill Forts of Rajasthan” along with five other forts.

The city of Amer was a small town before the rule of the Kachwahas, built by a small tribe called ‘Meena’. Amer Fort is named after Ambikeshwar, another name of Lord Shiva, however, local people also believe that the name is derived from Amba, another name of Goddess Durga. Once named Dhundar, the city was ruled by the Kachhwahas from the 11th century to the 16th century, when the capital was finally shifted to Jaipur.

It was in the year 1592 AD that Raja Man Singh built the fort with efforts to expand and refurbish it for the next 150 years by his successors. The old palace named ‘Kadhimi Mahal’ is considered to be the oldest palace in the country. Raja Man Singh also built a small temple dedicated to his patron goddess ‘Sheela Mata’. With many old structures destroyed and new ones brought in, Amer Fort stood against all odds with great enthusiasm.

The architecture of Amer Fort

The Amer Fort has a traditional Hindu and Rajputana style of architecture. It is aesthetically crafted with marble and red sandstone giving it a rustic and mysterious look. There are intricate drawings of ancient hunting styles and portraits of important Rajput rulers. The Amer Fort is divided into four sections, each with its own separate entrance and courtyard. The main entrance of the fort is called ‘Suraj Pol’ or Surya Dwar which leads to the main courtyard. The gate facing east, this entrance has got its name because of its position in relation to the rising sun.

The grand staircase leads you to an impressive courtyard called ‘Jaleb Chowk’ in the palace complex, while the stairs to the right lead to the Siladevi Temple. Jaleb Chowk was used by the army to display its war booty in a time when women were only allowed to watch proceedings through windows.

The Diwan-i-Aam (Public Audience) is the second level of the Amer Fort. It is a huge hall open from three sides. With extensive mosaic glass work, it stands on the support of two columns of columns with mounted elephants. The third courtyard of Amer Fort is around the royal quarter. Access to this level is through Ganesh Pol. The ‘Sheesh Mahal’ is the most beautiful attraction in the entire complex and is left at the entrance. There are beautiful carvings of flowers and glass paintings on the walls and ceilings. Sheesh, Mahal gives a beautiful illusion and you must have heard people discussing that if you light two candles inside the hall, the ceiling feels like a thousand shining stars.

The ‘Sukh Mahal’ is another hall opposite the Sheesh Mahal and is made of sandalwood and ivory. It has several channels with running cold water. Another feature of the Amer Fort is the ‘Magic Flower’, a mural made of marble and a delicate carving of Lord Ganesha from a single piece of coral. To the south of this courtyard is the oldest part of the complex and the main palace used by Man Singh I. The exit from the main palace leads directly to the city of Amer. The last level of the Amer Fort was built for the royal women. It has a courtyard surrounded by several rooms. There is also a hall known as Jas Mandir which was used at the time for private visitors.

A fifty-minute long light and sound show is organized every evening at Amer Fort showcasing the history of Jaipur and the fort. With an aim to revive the rich history, tradition, and culture of the state, the show celebrates local legends, folklore, and folk music. Photography, video, or audio recording of the show is prohibited.

How To Reach Amer Fort

Amer Fort is 11 km away from Jaipur which is the capital of Rajasthan and is also the nearest airport and railway station. Jaipur is easily connected to major parts of the country

Cabs and taxis are easily available from Jaipur. State buses also ply to Amber from Jaipur and other major cities of the state. Public buses ply from Ajmeri Gate and MI Road and take around twenty minutes to reach Amer Fort.

Q. What is Amer Fort famous for?

A – Amer Fort is known for its artistic style elements. With its large ramparts and series of gates and paved paths, the fort overlooks the Maota Lake, the main source of water for the Amer Palace. Reference No. Amer Palace is a fine example of Rajput architecture.

Q. What is inside Amer Fort?

A – Amer Fort is situated in a town called Amer which is situated at a distance of about 11 km from Jaipur. The fort is built on a Hindu architectural background with gates, temples, palaces, and other structures. There is a Maota lake nearby to provide water inside the fort.

Q. What is the story of Amer Fort?

A – Early History of Amer Fort, Jaipur- Rajasthan. The settlement in 1860 Amer was established in 967 AD by Raja Alan Singh, the ruler of the Chanda dynasty of Meena. The Amer Fort, as it is now, was built on the remains of this old structure during the reign of Raja Man Singh, the Kachwaha king of Amer.

Q. Can we visit Amer Fort at night?

A – The night tour is allowed at Amer Fort after it closes at 5.00 PM. Timings are from 6.30 pm to 9.00 pm. The ticket will cost Rs 100. You can enter all the places that are available for viewing in the morning.

Q. Which is better Amer Fort or Nahargarh?

A – Nahargarh may seem an odd favorite in a city of large forts, but it offers relative solitude, especially compared to the busy Amber Fort. Lighter and paler in color, Nahargarh also offers something that the other two more popular forts of Jaipur cannot – unobstructed views of the city Jaipur.

Q. What is the best time to visit Amer Fort?

A – The opening hours of Amer Fort are from 8 am to 5:30 pm daily. If you are looking for the best time to visit Amer Fort, then you should consider the months from October to March. The weather is relatively pleasant and cool during these months.

A – It takes you about 3 to 3.5 hours to see the Amer Fort. Yes, you can visit both the forts on the same day but will end the day in the evening. You can see the sunrise in the Amer Fort there.

A – Amber Fort is the birthplace of Jodha Bai, especially after the film even the guides refer to it

Q. Who lives in Amer Fort?

A – Amber was once the capital of the princely state of Jaipur and the fort was the residence of Rajput rulers. Maharaja Man Singh I, who led the army of Mughal Emperor Akbar, started its construction in 1592 on the ruins of an 11th-century fort.

A – This complex was built by Raja Man Singh, Mirza Raja Jai ​​Singh, and Sawai Jai Singh over almost two centuries. This palace complex was used as the main residence of Rajput Maharajas for a long time. The fort of Amber is associated with a rich history involving betrayal and bloodshed.