Buenos Aires: The 7 Most Interesting Buildings 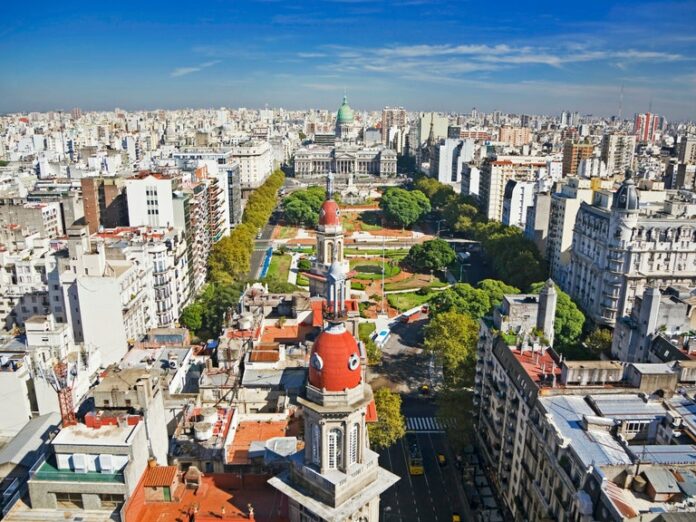 A visit to the capital of Argentina is not complete without seeing the palatial architecture that lines the streets. Buenos Aires has been dubbed the “Paris of South America” ​​for its elaborate European style of architecture. From Baroque-inspired churches to French-style buildings, beyond the famous presidential palace, Buenos Aires has countless historic buildings. Here are seven you shouldn’t miss:

This symmetrical, millennial pink building is like a Wes Anderson movie. Inside, this grand building is a 19th-century opera house, in which legendary singers such as Maria Callas and Luciano Pavarotti have staged their grandeur. It was restored in 2010 and stands as a beacon of Argentine design. It also features notable materials such as marble for mosaics, mirrors, and Venetian glass shipped from Italy. They have tours in English, so check their website for bookings.

This grand church is in the city center of San Nicolas just steps from the city’s National History Museum. It is known as the place where Pope Francis came to pray and is the main cathedral of Buenos Aires. Once you step inside this 18th-century gem, it reveals a stunning collection of European mosaics, paintings, and stained glass as well as a golden light projected onto its ceiling, giving it a grand vibe.

This ornate church is somewhat Venetian in its gilded baroque design. Just a few steps from the city’s famous Recoleta cemetery. It is the go-to venue for high society couples to marry, and this cathedral is steeped in history and is free to visit. It was built in 1732 and is filled with countless marble sculptures, a sacred altar, and religious artifacts.

This beautiful building was first used as the fashion headquarters of a textile company in the 20th century and was designed to resemble the building of Dante’s Divine Comedy. The basement and ground floor represent the gates of hell, while the levels above represent purification. The highest area, which leads up to the 22nd floor, represents heaven and is completely covered in white. Listed as a historic monument in 1997, tours of the building are available in English and Spanish.

This historic building on the waterfront looks like a church, but it is not. It is home to the National Museum of Cabildo, which traces the history of Argentina’s independence from Spain in the 18th century. As the city’s former town hall, there are arms, official organization, and hand-written letters detailing the 1810 May Revolution. Catching a guided tour here will reveal many unseen details of the city’s history.

In English, this palace is called “Water Palace”. The palace is huge, it spans an entire city block, so it cannot be missed. Originally designed as a water pumping station, it was built in the style of a French Renaissance palace and is covered in thousands of terra cotta ceramic tiles imported from England. The facade, facing Cordoba Avenue, is one of the most distinct in the city; It is washed in orange, blue, and green.

Another grand pastel building is called the “Pink House”. The palace opposite the famous Plaza de Mayo is now home to the office of the President of Argentina. It also has a section that is home to the Casa Rosada Museum, which traces the political history of the country. From oil paintings of past leaders to memorabilia and vintage photographs, countless items such as old furniture, swords, and books have been used throughout Argentine history.

Q. What is Buenos Aires, Argentina known for?

A – Known as the “Paris of the South”, It boasts renowned architecture, world-class cuisine, lively entertainment, world-class shopping, rich historical sites, and more.

Q. Is Buenos Aires worth seeing?

A – This place is a pulsating, passionate, cosmopolitan city. The combination of rich architectural and cultural heritage, modern creative energy, electric nightlife, unique traditions, a vibrant arts scene, extensive parks, and warm, friendly hosts make it one of the most exciting capitals in the world.

Q. What is the best month to go to Buenos Aires?

Q. What are the hottest months in Buenos Aires?

A – January is the hottest month in Buenos Aires with an average temperature of 25 °C (77 °F) and the coldest June is 12 °C (54 °F) and February has the highest daily sunshine hours at 9. The wettest month is January with an average rainfall of 100 mm.

Q. Is the weather nice in Buenos Aires, Argentina?

A – The climate of Buenos Aires is temperate. Argentina’s high season is during the summer months of October to March and the winter months of July. It gets extremely hot and humid in January and February. So the best months to visit seasonally are October, November and March, April and May.

A – The spike in poverty has exacerbated inequalities. In wealthy Buenos Aires City, 16 percent of residents live in poverty, while in Conurbano, the densely populated ring around the City, 51 percent are considered poor, with 15.2 percent classified as destitute.

A – Argentines are very friendly, open, and generous, with both your time and the willingness to exercise your terrific Spanish on them. They love to chat, which explains why they don’t mind standing in a queue for hours on end. Luckily they also love to travel, so you can find them all over the world.

Q. Why is Argentina a poor country?

A – Poverty in Argentina has its roots in the unrestrained spending of the Argentine government. This government spending resulted in heavy inflation due to a huge fiscal deficit and failed attempts to revive Argentina’s economy.

Q. Do they speak English in Buenos Aires?

A – English is not spoken very widely in Argentina – the official language is Spanish, followed by Italian with about 1.5 million speakers. You may be fine using English in the tourist areas of Buenos Aires but you will not find English speakers anywhere else in the country.