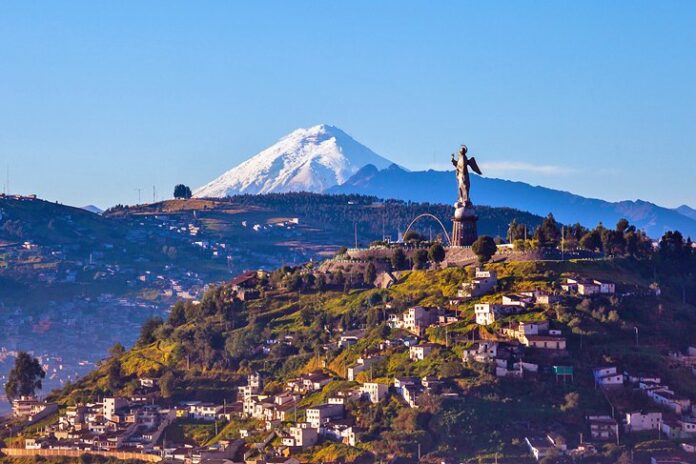 You don’t have to live under an umbrella on the beach or on a cruise to the Galapagos to learn about the real Ecuador. All you have to do is get out of Dodge (in this case, Quito), let your mind wander, and let the diverse experiences of Ecuador take over. Where else in the world can you see the healing waters of a mountain spa, the mangroves of a jungle oasis, and the heritage of a traditional hacienda all in one visit? Nowhere, there it is.

Get your head in the clouds

In the distance or staring you in the face, the Andean highlands are a marvel, running straight north-south through the country. A region is a group of four distinct ranges of glacial mountains, high plains, and valleys, quaint communities, and volcanoes, many of which are active.

In downtown Otavalo, visitors wander the largest outdoor market in South America, savoring local foods and checking out famous handmade clothes, perhaps even visiting a weaver’s workshop. Tradition runs deep here. Nearby Hacienda Pinsaqui, a historic heritage home, has been welcoming guests since 1790, including savior Simon Bolivar of South America and art legend Frida Kahlo. Seven generations in the same family, the Hacienda’s rich history and warm hospitality are evident at every turn, including the trophy-filled Equestrian Bar, the only original part of the home left after the 1868 earthquake.

“Take the waters” in the spa town

Baos has two distinct reputations in south-central Ecuador: as both a spa town and adventure hub, the two hats wear it very well. It is located at the foot of the Tungurahua volcano, which has been known to erupt from time to time. And thanks to the volcano, the mineral-rich hot springs make Baos a mecca for spa-goers – and there’s plenty to choose from. Get a relaxing massage after a day of hiking, but be sure to visit the public bathhouse at some point to get a real feel for the city, while taking in the water with the people of the city.

Adventure sports such as paragliding, canyoning, rafting, kayaking, and ziplining top the list of offerings at many tour companies in and outside Baos. Young tourists and locals also flock here to take advantage of the hill climb through the region’s vast national park.

This tourist town actually has a third cap: a Roman Catholic religious center. There is a waterfall in the town where the Virgin Mary is said to have appeared, an event to which people still make pilgrimages throughout the year.

Very likely you will start and end your trip in the capital city of Quito, which, like other large centers, is made up of smaller neighborhoods, each with its own unique essence. It’s a no-brainer to check out the Old Town’s churches, museums, and heritage buildings (weekends tend to be more crowded). La Marseille comes alive at the end of the workday when young crowds flock to the bars and restaurants near Plaza Foch. Calle de la Ronda is good for a traditional Ecuadorian light breakfast and a few glasses of wine at cocktail hour.

In regards to cuisine, the traditional food is both reasonably priced and delicious: fried chicken, grilled fish, and churrasco beef sit alongside fried potatoes, flavored rice, or deep-fried plantains. Challenge your taste buds by braving the street food; Choose stalls that have a crowd around them. Remember that no matter how unexpected something may seem – ie the aforementioned beetle larvae – you can enjoy it to the fullest. And if you don’t, at least you have a story to tell when you get home.

Go when it suits you best.

Happily, you can visit Ecuador all year round, with the two seasons providing different climates: the green season from December to May is the hottest, but they’re also the hottest. June to November is the dry season, which is cooler and less crowded.

Q. Is Ecuador a safe country?

A – The short answer is yes, Ecuador is safe, as long as you take proper care. Ecuador is as safe as most other developing countries, and cities like Quito are as safe as most major cities in the world, but with the general provision that you should always travel with caution and common sense, and walk on the road.

Q. What is Ecuador famous for?

A – Ecuador is famous for being home to the Galapagos Islands, but there is much more to the fourth smallest nation in South America. From historical links to the ancient Inca to unusual modern exports, here are 12 surprising things you didn’t know about Ecuador.

Q. Why is Ecuador a poor country?

A – Ecuador is one of those countries where children do not need to receive an education. As a result, lack of education is one of the main causes of poverty in Ecuador. More than 60 percent of the population lives near the poverty line. Because of this, child labor is the main source of income for many families.

A – Their history, which spans the past 11,000 years, reaches into the present; 25 percent of Ecuador’s population is of indigenous heritage, while the other 55–65 percent are mestizos of mixed indigenous and European heritage.

Q. What is Ecuador’s Famous food?

A – Ecuador Food and Drink

Q. Is Ecuador a third-world country?

A – In short, Ecuador is a third-world country. It meets the standards that are currently used to describe third-world countries. The country has high rates of poverty, high infant mortality rates, poor prison conditions, and poor education levels.

Q. What languages ​​are spoken in Ecuador?

A – The official language of Ecuador is Spanish, but Quichua, the language of the Inca Empire, is spoken by many indigenous peoples. Nine additional indigenous languages ​​are also spoken in Ecuador. English is spoken in the major visitor centers.

Q. What is the weather like throughout the year in Ecuador?

Q. Is Ecuador warm throughout the year?

A – Most parts of Ecuador have mild temperatures throughout the year. In the highlands of the Andes, temperatures are generally cooler. The average temperature in Quito is in the mid-60s Fahrenheit (17 – 18 °C).

A – Being located on the equator, most of Ecuador has a humid and tropical climate. Regions of the Costa region are affected by more significant variations related to the movement of the cold Peru Current and the Intertropical Convergence Zone.