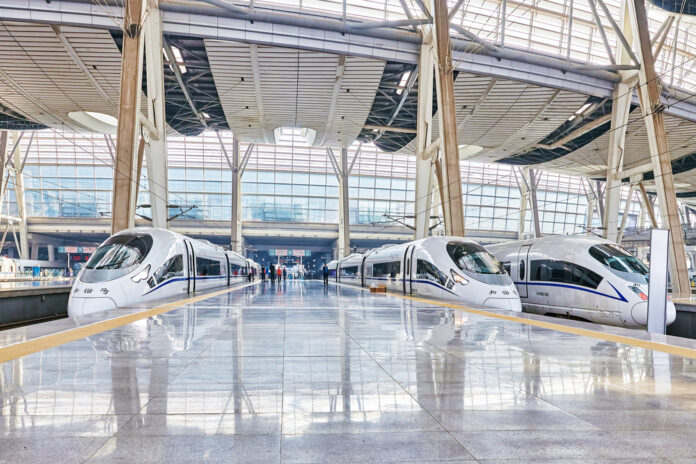 Traveling around China by train is not only a great way to save money but also an opportunity to get to know the country from the inside. China boasts an extensive rail network and modern and highly comfortable trains. We will tell you about the most exciting routes in this article.

The route from Xining to Lhasa is considered the most beautiful section of the Qinghai-Tibetan Railway. It is the highest mountain railway in the world. In China, it is often called the “path to heaven.” The train on the Tang-La mountain pass rises to a maximum height of five thousand meters above sea level, and also passes through the Fenghoshan tunnel – the longest among those built in the high-mountain tundra zone.

On the way, the windows offer stunning views of endless deserts, mountain lakes, and snow-capped peaks. Each carriage is supplied with supplemental oxygen to prevent altitude sickness. At some stations, if there is no pick-up and drop-off of passengers, the doors are not even opened in order not to let in the rarefied air. Protection against solar radiation is also provided.

Since the opening of the Hefei-Fuzhou high-speed railway in June 2015, the travel time between the two cities has been reduced from fourteen to four hours. The railway immediately won the title of “the most beautiful high-speed railway route in China”, and absolutely deservedly.

Most of the road passes through bridges and tunnels. There are 170 bridges and 54 tunnels along the train route. The longest of them is the 50 km long railway bridge across the Yangtze River.

Along the way, travelers can see several popular tourist places at once, the most picturesque of them, of course, are the Huangshan and Wuyishan mountains, which are included in the list of UNESCO World Heritage Sites.

This route completely repeats the section of the Great Silk Road – the caravan road connecting East Asia with the Mediterranean in antiquity and in the Middle Ages.

On the way, passengers enjoy stunning views of the Yellow River, the largest desert in Asia – the Gobi, the westernmost fortification on the Great Wall of China – the Jiayuguan Fortress, as well as the “Heavenly Lake” of Tianchi, famous for its crystal clear water.

Traveling on the Trans Mongolian Railway is an unforgettable experience. In addition to the unique natural landscapes, fellow travelers – Chinese, Mongols, Uighurs – will also be of great interest – a real mosaic of various religions and cultures.

Since China and Mongolia have different track gauges, wheelsets are also replaced at the Eren-Khoto border station along with customs inspection. The train is literally lifted into the air, wheels are changed and then lowered onto a different track.

The capital of two states: China and North Korea is connected by train number 27. There is only one class of tickets for this route: a soft berth. Trains run on Mondays, Wednesdays, Thursdays, and Saturdays.

The coolest thing about this route is not the landscapes outside the window (although they, of course, will not leave anyone indifferent), but a unique chance to communicate in an informal setting with Koreans, to touch their life. During an official tourist trip around the country, such an opportunity may not be presented. As a rule, guides do not allow tourists to approach the citizens of the DPRK for a kilometer.

Finally, here are some helpful tips on traveling in China by train.