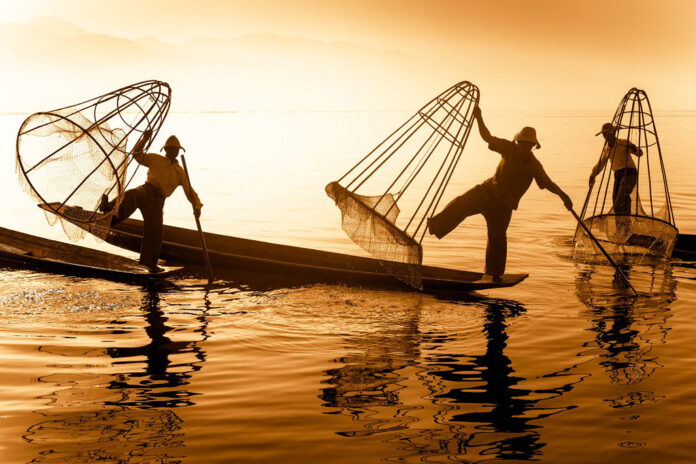 Myanmar(formerly known as Burma) is one of the most mysterious and little-studied countries in Southeast Asia. Due to the peculiarities of the political system (since 1962, the rules of the junta here and only in 2012 did the regime begin to soften), for a long time, Myanmar was either partially or completely closed to foreign tourists. As a result, Western culture had almost no impact on the life of the Burmese, and in many parts of the country, people continue to live the same way as they did fifty or even a hundred years ago. Inle Lake

On the territory of Shan State, where Lake Inle is located, for the most part, such an old way has been preserved. Local residents still practice the traditional occupations of their fathers and grandfathers – fishing, weaving, and gardening, and life flows so slowly and measuredly that only thanks to satellite dishes and motorboats it is possible to understand that it is the 21st century.

Immediately upon arrival at Inle, it becomes obvious why the lake received the status of the second (after the Bagan pagodas) in importance for the sights of Myanmar. Surrounded by mountains, covered with green islets, Inle makes a strong impression. Add to this fisherman in traditional boats (which are supposed to paddle with your foot), many species of birds and Buddhist monasteries built right on the water, and you have a completely unforgettable and exotic picture.

About 100 thousand representatives of the Intha people live on the lake in 17 villages, which translates as “children of the lake”. It is believed that these people settled on the lake to escape the raids of the more warlike neighboring tribes. Houses here are built right on the water, on stilts, and the streets between them are canals along which locals and tourists travel by boat. Thanks to this system of canals, the surroundings of Inle Lake are called the Asiatic Venice.

Intha has come up with a very original way of farming without going ashore – when pieces of humus from rotted algae and roots of aquatic plants float to the surface, they are simply fixed in place with bamboo poles, and vegetables and flowers are grown on these peculiar islands.

The Intha have been practicing Buddhism for several centuries, so on the lake itself and near it, you will find many temples, monasteries, and pagodas. Of greatest interest is the Indian Hill, on which there are several hundred pagodas. The oldest of them were built in the 14th century, the bulk of the structures date back to the 17-18th centuries. Many pagodas are in various stages of destruction, and some have already reached the hands of Burmese restorers, and now they are concrete turrets covered with gold paint.

To get to Indian, you need to swim several kilometers along a long, narrow channel. Please note that in summer, when the lake is shallow, movement along the canal is impossible. And keep in mind that on the way from the pier to the hill you will have to overcome the local souvenir collapse, and this is not an easy task – the Burmese are very persistent in their desire to sell something to tourists.

The largest temple on the lake, Phaung Do U Quang, is famous for its Buddha statues – there are five of them. Locals claim that the figurines were brought to the lake from Bagan and they can heal diseases and make wishes come true. To express their respect for the five Buddhas, believers stick-thin leaves of gold leaf on them, so the statues have long lost their original shape and look like fancy gold blocks. It is said that monks periodically chop off pieces of gold plating from statuettes – not in order to cash in, but simply so that they can fit on the altar.

As in many other parts of the world, Inle Lake has a popular tourist attraction – visiting factories and workshops. Fabrics for sarongs and stoles are still woven on the lake, so the factories are quite working there. But the forging of swords and daggers and the production of jewelry has long been focused exclusively on tourists. Household knives and scissors are made in the interior of the Shan state, but this production is of no interest to foreigners.

Padaung women can be found in weaving factories (and photographed with them for a small fee). These ladies are famous for wearing many heavy brass rings around their necks. From the age of five, girls begin to wear rings around their necks, increasing their number every year. As a result, their collarbones drop, their ribcage is compressed, and their necks visually appear unnaturally long. Contrary to prejudice, the rings can be removed; this will not cause any problems with the spine. And today more and more women do this, getting rid of jewelry forever.

In general, many different tribes and small peoples live in the Shan State, whose representatives can be seen in the traditional floating markets on Inle Lake. They come to the markets not only to trade in various products and souvenirs but also to be photographed with tourists for a fee. If you suddenly feel embarrassed that you came to the market to gaze at the representatives of small peoples, then we can reassure you – firstly, you yourself are of no less interest to them, and, secondly, for many of the villagers, photographing with tourists – the only way to make money.

Every year more and more travelers from Europe and the USA come to Inle. Of course, the conditions for tourists on the lake have improved significantly in recent years, but there are also disadvantages – traffic on the water is becoming more lively, the lazy relaxed atmosphere is disappearing, and prices are constantly rising. So, if you are interested in Inle Lake (and Myanmar in general), we advise you not to postpone the trip indefinitely.

Previous article
Things to do in Vietnam
Next article
China by train: 5 unforgettable routes