Busan, South Korea – The Top 12 Things to Do 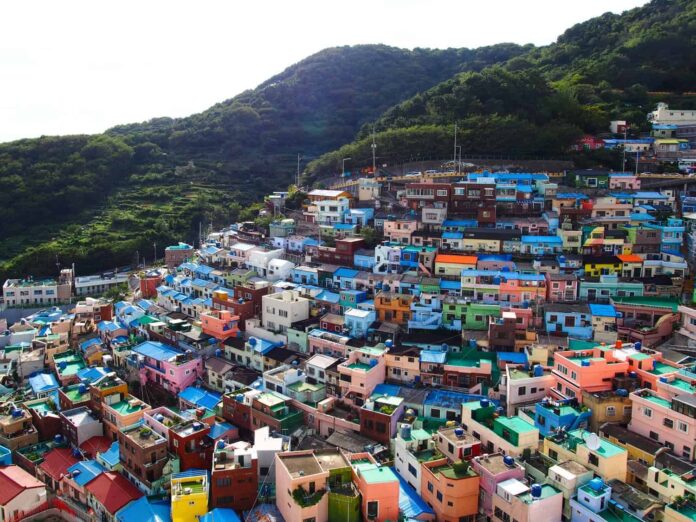 Seoul is a city of hustle and bustle, bright lights, and busy streets. But head a few hours southeast to the tip of the Korean Peninsula and you’ll find a calmer, quieter corner of South Korea called Busan.

Busan is South Korea’s second largest city with a population of more than 3.5 million. Its port is among the busiest in the world, and while the city is an industrial center, it’s also home to a number of historic sites, museums, markets and beaches. These are the best things to do in Busan, South Korea.

Soak in the Sunshine at Haeundae Beach

Haeundae Beach is one of South Korea’s most famous stretches of sand. The nearly mile-long white sand beach is just a 40 minute train ride from Busan Station and an hour away from the nearest international airport. It has a wide coastline and shallow bay, making it ideal for swimming or lounging under a beach umbrella.

Move over Macy’s Herald Square, there’s a bigger department store in town. Busan’s Shinsegae Centum City is officially the world’s largest department store, according to the Guinness Book of World Records. The 3.1 million-square-foot retail hub includes a Korean spa, an ice skating rink, a movie theater, and a theme park. It’s a multistory Busan landmark that sells everything you could possibly need for your home, wardrobe, or beauty routine.

These 40 steps were a hub of activity during the Korean War. People displaced by the war made makeshift housing here, traded goods, and reunited with family members. The area, which includes the stairway as well as the short street leading to it, is meant to embody the joys and sorrows of people displaced by the Korean War. The area includes several sculptures reflecting daily life in Korea during the 1950s and 1960s.

Pay Your Respects at the UN Memorial Cemetery

This somber site is a burial ground for casualties from the Korean War. It is the only United Nations cemetery in the world and contains 2,300 graves arranged by country. A sculpture park was added in 2001 and a Wall of Remembrance, finished in 2006, is inscribed with the names of 40,896 United Nations service members who were killed or reported missing in action during the Korean War. More than 36,000 of those service members were from the United States, which sent more troops to the area than any other country.

Take in the Views From Busan Tower

If you’re looking to get a bird’s eye view of Busan, head to Busan Tower. The 394-foot (120-meter) tower was built in 1973 and offers a views of the city and its port, the fifth busiest in the world. The tower is located in Busan’s Yongdusan Park.

Shop at the Nampo-dong International Market

Nampo-dong is a shopper’s paradise close to Busan Tower. The area includes a pedestrian thoroughfare lined with shops and restaurants as well as the Gukje Market, known for its street food, and the Jagalchi Market, South Korea’s largest fresh seafood market.

Gwangalli Beach is a curved half-moon beach known for its fine sand and nightly light shows. The beach is smaller and quieter than Haeundae but it’s in an area with plenty of restaurants, coffee shops, and clubs. It’s also an excellent vantage point for checking out the Gwangan Bridge, which puts on five-minute light shows two or three times a night.

Visit the Mermaid at Dongbaek Island

Dongbaek Island is located just off of the western end of Haeundae Beach. It’s known for its beach views as well as a walking path that circles the island, cutting through its dense collections of pine trees. The path can be completed in less than an hour and holds a few surprises, including a mermaid statue. Dongbaek Island isn’t technically an island anymore and has become an extension of the mainland. Buses and trains to Dongbaek are available from Busan Station.

Walk on Water at the Oryukdo Skywalk

The Oryukdo Skywalk is probably as close as you’ll ever be able to get to walking on water. The skywalk is a glass bridge built on the edge of a 114-foot-high cliff above the water where the East Sea meets the South Sea. It’s free to walk the bridge and watch the waves crash beneath your feet, and you can get there in about a half hour by bus from central Busan.

Haedong Yonggung Temple is a temple with a view. While many of South Korea’s temples are located in mountainous areas, Haedong Yonggung temple overlooks the water. The Buddhist temple was built under another name in 1376, but it was destroyed during Japanese invasions of Korea and rebuilt in the 1930s. It’s now a popular spot for watching the sun rise on New Year’s day and easily accessible by bus and train.

Must Read – GARDENS BY THE BAY – SINGAPORE

This residential area housed refugees after the Korean War, but nowadays it’s known for its colorful houses and vibrant street art. The village is carved into the side of a mountain and reminiscent of the Amalfi Coast with its narrow alleys and steep stairways. While very photogenic, Gamcheon Culture Village is still a heavily residential area and a good place to get a feel for daily life in Busan.

Must Read – MYANMAR – AN AMAZING EXPERIENCE

Eat Your Heart Out in Chinatown

Across the street from Busan station is one of the world’s most interesting Chinatowns. In Busan, Chinatown collides with Russiatown to create a multicultural neighborhood where Chinese characters and Cyrillic letters live side by side. Busan’s Chinatown dates to the 1884 when the city established ties with Shanghai and developed a Chinese school and consulate in the area. Nowadays, it’s known for both its Chinese and Russian restaurants.

Q. How cold is Busan in winter?

A. In winter, the weather remains quite cold and frosty in Busan in winter. Although this city is quite warmer than other parts of the country, in the winter season, the temperature can drop up to -10 degrees.

Q. Does it snow in Busan in winter?

A. No, snow in Busan is rare because it is located in the least snowy region of Korea. However, one can witness light snow if lucky.

Q. Which is the most romantic thing to do for couples in Busan during winter?

A. One of the most romantic activities for couples in Busan winter is either the Christmas tree festival or a spa treatment.

Q. Do we need to pack extra clothing for Busan in winter?

A. Yes, a set of winter wear can help you a lot. Just knowing about the forecast is not ample. You have to face the weather at ground zero. Some extra clothes will help you to be warm.

Q. What are the famous festivals that are organized in Busan in winter?

A. Haeundae Polar Swim Festival and The Busan Christmas Tree Festival are the two annual festivals organized in winter.

Q. What are the highlights of the Busan Christmas Tree Festival?

A. The main highlight is an 18 meter tall Christmas tree in the center of Busan. Other than that, there are daily concerts organized.

Q. For how long the Christmas Tree Festival is celebrated?

A. The Christmas tree festival is celebrated for around 40 days during Christmas time in Korea. The main center of attraction is the tall Christmas tree height 18 m and extravagant live performances.

Q. How to prepare yourself for spending winter in Busan?

A. You can buckle up yourself by keeping winter wears and can go under usual health checkups to remain fit for any climatic changes in Busan. Be prepared to be a part of the Christmas Tree Festival as well.

Previous article
Bali – Off Beat Resorts for a Safe Vacay!
Next article
Dubai – 11 Amazing Must Try Food In 2022