Buddhists Sites In Sri Lanka For A Spiritual Experience 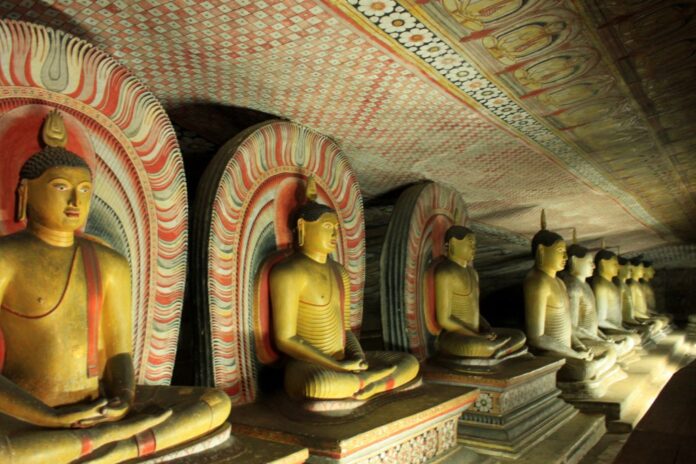 Buddhists Sites, Sri Lanka is an exotic emerald island of beautiful ancient cities and stunning rock cities. The country, also being an ancient center for Buddhism, is one of the first places where the emissaries of King Ashoka introduced Buddhism. As a result, Sri Lanka Buddhist tourism is very popular and thousands of people travel to different places in the country to meditate and find peace.

Read on to know more about Sri Lanka’s most important Buddhist pilgrimage sites where you can learn all about spirituality and religious practices in the country:

Sigiriya rock has been important in the Lankans’ conscience for two millennia. In the 5th century AD, the king of the ancient city of Anuradhapura built a palace atop the Sigiriya cliff, which in the next few centuries turned into one of the most important centers of power in the south. In the 13th century, the palace was transformed into a monastery. Today, the place is a UNESCO World Heritage Site and tourists can still feel the spiritual vibrancy of the place as they reach the top after 1200 steps. Also, roam the ruins of the Sky Palace to get a glimpse into its history.

This Bodhi tree was planted in the ancient city of Anuradhapura in 249 BCE and is said to be an erosion from the actual tree under which Gautama Buddha attained enlightenment. While the city has fallen into ruins, the Bodhi tree has become a major attraction for Buddhist travelers. It is the oldest living tree in the world with a known date on which it was planted. While the ruins of Anuradhapura are a treat for those interested in architecture, the Jaya Sri Maha Bodhi tree is also a deeply spiritual experience for non-pilgrims and is often included in Sri Lanka holiday packages.

Mihintale Buddha is another treasure for people seeking religious and spiritual experiences in the ancient city of Anuradhapura and is one of the best Sri Lanka tourist destinations. Located about 12 kilometers east of the ruins of the city of Anuradhapura, the mountain peak is believed to be the place where Buddhism originated in Sri Lanka. Legend has it that this was the place where Mahinda, son of Emperor Ashoka, who converted to Buddhism, met the ruler of Sri Lanka and recited the verses of Kulasthipadopama as well as other scriptures. Today the peak can be reached by climbing 1840 granite steps carved into the mountain. There are also quarters for the monks residing here and various temples along the way.

Located in the central highlands of Ratnapura district, this conical mountain peak is another great center of Buddhist tourism. Best known for Sri Paadar, the sacred rock formation which is considered the Buddha’s footprint. Curiously, it is also called the footprint of Shiva (in Hindu mythology) and Adam (in Islamic and Christian traditions). There are many trails that lead to the hiker summit, but the grand profile of the mountain is an attraction from far away. Adam’s Peak is also quite romantic and is often on a Sri Lanka honeymoon package.

It is another important temple among Buddhist temples in Sri Lanka. Dating back to the 9th century it is an important place for the Mahayana sect of Buddhism and one of the best places in Sri Lanka. It is located less than 4 miles from Velveya in the Monargala district. The seven grand statues of various figures, mainly important for the sect, are highly revered in Sri Lanka. The central statue of the Buddha still has traces of a rotten robe and gives the impression that it was brightly painted at some point in the last millennium.

These places in Sri Lanka provide rich spiritual experiences to tourists and pilgrims alike. If you are looking for a rich and meaningful experience for one of these Buddhist pilgrimage sites in Sri Lanka