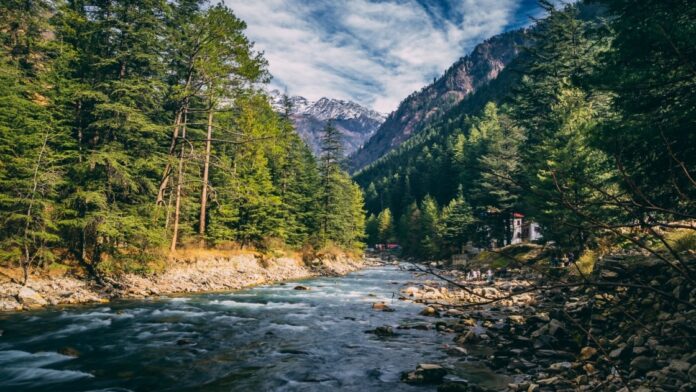 Parvati Valley, in the Kullu district of Himachal Pradesh, is known by young Indians and international travelers for its psychedelic trance festivals, hippie cafes, and quality hashes grown in its villages (although it is illegal in India). The scenery is stunning too. It consists of high Himalayan peaks, lush green forests, dazzling rivers, and waterfalls, all of which are a fearless playground for trekking, camping, and rock-climbing.

To make the most of your trip, travel from June to June or October and November when the temperature remains a pleasant 60F or so. Avoid the monsoon season from July to September, as frequent landslides occur. To stay, you will find comfortable hotels, hostels, homestays, and guesthouses in all price categories. Except for Kasol and Manikaran, remote areas of the valley do not have ATMs, so be sure to carry enough cash. Power outages are a common occurrence, so you want to carry a power bank and a flashlight.

Getting into this Himalayan valley is not as difficult as in other remote valleys of North India. Fly to Kullu-Manali Airport in Bhuntar, and you will be in Kasol in about an hour by taxi. Alternatively, you can reach here by train. The nearest railway station is Joginder Nagar. From there, take a bus to Parvati valley or take a taxi. However, the easiest way to travel to the valley is to board a Volvo bus from Delhi to Manali and get off at Bhuntar. From there take another bus or taxi to your intended destination in Parvati valley.

Located on the banks of the Parvati River, Kasol, Parvati valley has a well-established reputation as a regularly established hippie center, with music cafes and bhajan ceremonies held regularly here. It is particularly popular among Israeli travelers who have now settled in the region. Aptly, the village is also known as the “Mini Israel of India”. Be sure to sample local cuisine including Israeli food at the cafe.

If you are feeling energized and energized for an adventure, there are several treks around the village that offer amazing views of the natural landscape. If you are a gentle delight, check out the nearby villages. If you are looking for a challenging venture, go for multi-day treks like Chandrakhani Pass and Sir Pass; The latter also provides rock-climbing opportunities.

Located atop the popular Kasol, you will find a relatively peaceful village of Grahan, built of traditional wooden houses, which perfectly conform to the natural landscape. The village can be reached only by walking on foot from Kasol. It takes about four hours to get there, and friendly locals are happy to show off its unexpected wonderland. In the middle of the village is the historic temple of the village deity; Be sure to get permission from the locals before entering. Additionally, Gran’s food is prepared from local ingredients, which is one of the best gastronomic experiences for you in the valley. Be sure to try the local specialty, their mountain-grown honey before leaving.

Tosh is situated at a height of 7,900 feet on a hill near Kasol. The trek to this village is as difficult or as easy as you choose; Many enthusiasts drive to the village, but taxis are available from Kasol which will take you away from the village in an hour. Stroll through lush green pastures and apple fields, do birdwatching and taste Indian and Israeli food at the hippie café. Of course, being active is also on the agenda, with beautiful hiking routes through the mountains surrounding it.

Manikaran is located about 2.5 miles east of Kasol and is easily accessible via bus. Apart from the amazing views of the surrounding Harinder mountains and short treks to fulfill your need for adventure, Manikaran also offers spiritual charm. The most visited among the tourists is the Gurudwara Sri Manikaran Sahib, a Sikh house known for its mineral-rich hot springs and langar (community food). The Shiva temple near the gurudwara should also be visited, as are the 17th-century Lord Ram Chandraji temple and the wood-built Naina Bhagwati temple.

Malana is a secluded village where locals practice extreme untouchability, consider that they are descended from Alexander the Great, and the law and language are completely different from the rest of the country. This alliteration is a draw in itself, but many people come for it which is a locally developed hash cream called Malana Cream, which is probably considered the best in India. The village is surrounded by Dev Tibba and Chandrakhani peaks, giving it a picturesque quality. To get here, hire a taxi from Kasol to Malana Gate, then walk a mile or two from there, cross the bridge over the Malana River and then follow the picturesque riverbank route to the village.

In addition, the Weichin Valley is located. It is easy to travel to Malana Village as a day trip, great walks, good food, and some excellent accommodation mean it is worth staying overnight.

Kheerganga can be reached from Barshaini via a relatively moderate and scenic four to five-hour trek, which is about 10 miles from Kasol. You can either take a taxi or a bus from Kasol to Barshaini. A journey from Barshaini to Kheerganga will take you through dense forests, along the quiet rivers, and into old villages. You will also come across a serene waterfall, where you can stop and rest.

Once you get there, not only will you be rewarded with an ethereal view of the surrounding landscape, but you will also be able to dive into the natural hot springs at the top. There are separate bathrooms for men and women. There is also an ancient Shiva temple and a cave, which are worth seeing. Although it is possible to take a day trip out of it, it is advisable to soak the overnight camp in the beautiful sunset and the crisp mountain air.

Q. Where is Parvati Valley?

A – Extending from Bhuntar to Spiti, the Parvati Valley is located in the Kullu district of Himachal Pradesh. Passing through Manikaran, a pilgrimage town revered by both Hindus and Sikhs, the valley has many fascinating places to visit.

Q. Where is Kasol Parvati Valley?

A – Kasol is a village in the Kullu district in the Indian state of Himachal Pradesh. It is situated in the Parvati Valley, on the banks of the Parvati River, on the way between Bhuntar and Manikaran. It is located at a distance of 30 km (19 mi) from Bhuntar and 3.5 km (2.2 mi) from Manikaran.

Q. Geothermal energy in Puga valley and Parvati valley are which type of resources?

A – The Puga Valley in the Ladakh region of Jammu and Kashmir is one of the regions in India that has shown significant potential for geothermal energy in preliminary studies by the Government of India. The area shows evidence of geothermal activity in the form of hot springs, mud pools, sulfur, and borax deposits.

Q. How to reach Parvati Valley?

A – The two nearest airports to Parvati Valley are Kullu Manali Airport and Chandigarh International Airport. The flights are a bit expensive but really help reduce the travel time to just 1.5 hours. Once there, one can catch local buses or hire private/shared taxis to reach Parvati Valley.

Q. How to reach Parvati valley from Delhi?

Q. What is the distance between New Delhi and Parvati Valley?

Q. Where to stay in Parvati Valley?

A – Below are the best hotels in Parvati Valley

Q. Where is Kasol?

A – Kasol is a village in the Kullu district in the Indian state of Himachal Pradesh. It is situated in the Parvati Valley, on the banks of the Parvati River, on the way between Bhuntar and Manikaran. It is located at a distance of 30 km (19 mi) from Bhuntar and 3.5 km (2.2 mi) from Manikaran.

Q. How to reach Kasol from Delhi?

A – An overnight journey from Delhi to Bhuntar is the best option. A Volvo bus usually charges INR 1000-1500. Get down at Bhuntar and take an HRTC bus to Kasol, which will take around an hour or more to reach the destination. If you are traveling from Chandigarh, it will take around eight hours to reach Kasol.

Q. How to reach Kasol?

A – The nearest airport to Kasol is Kullu Manali Airport also known as Bhuntar Airport in the Kullu district. Daily flights connect the airport with the capital of the country, Delhi. You can book a cab or taxi from Bhuntar airport to Kasol which is just 31 km and it will take you around 1 hour to reach there.

Q. What is Kasol famous for?

A – Starting from the confluence of the Parvati River and the Beas River, the valley is famous for its beautiful picture form of coniferous forests and crystal clear mountain streams. Nestled in these sylvan hills is the charming village of Kasol.

Q. How to reach Tosh from Kasol?

A – The best way to reach here is by bus and you can take a bus to Manali and get down at Bhuntar which is about 50 km before Manali. From here you can take the HRTC bus to Barshaini. Now trek till Tosh as it is hardly any distance and it is one of the most beautiful and grand treks that you will overcome.

Q. Kasol is in which State?

A – Kasol is a village in the Kullu district in the Indian state of Himachal Pradesh. It is situated in the Parvati Valley, on the banks of the Parvati River, on the way between Bhuntar and Manikaran. Due to the high percentage of Israeli tourists here, it is called the Mini Israel of India.

Previous article
Auli, Uttarakhand – The Top 8 Things to Do
Next article
Semmozhi Poonga – Places to Visit Around