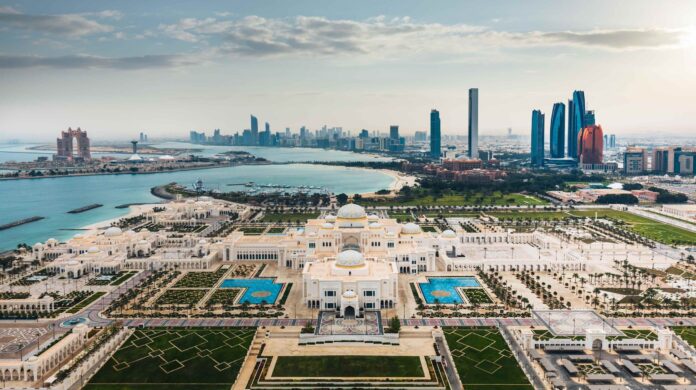 Abu Dhabi is the capital city of the United Arab Emirates, a country located in the Persian Gulf region of the Middle East. Founded in the 18th century, It has grown from a small fishing village to one of the most important cities in the world. With a population of over two million people, It is a major economic, political and cultural hub in the region.

Abu Dhabi is home to numerous iconic landmarks, including the Sheikh Zayed Grand Mosque and the Emirates Palace hotel. The city is also renowned for its vibrant nightlife, with plenty of bars, clubs and restaurants to choose from. When it comes to entertainment, Abu Dhabi has plenty to offer. There are several shopping malls, family-friendly attractions and cultural sites to explore, such as the Louvre Abu Dhabi. Visitors can also enjoy a range of activities such as water sports, desert safaris and dune bashing.

For those interested in history, Abu Dhabi has a rich culture and heritage that can be seen in the architecture of the city’s many buildings. There are many museums and galleries to explore, as well as historical sites such as the Al Ain Oasis. When it comes to accommodation, Abu Dhabi offers a range of options from luxury

If we asked you to name one thing that comes to your mind when we say Abu Dhabi, what would it be? It’s probably glittering glass and steel skylines, yes. It’s probably an expansive desert and a wealth of cultural heritage, yes. The opulence oozes, for sure. But did you know that beyond all of this, the emirate boasts land and water teeming with biodiversity? Coexisting with the bustling modern metropolis of Abu Dhabi are lush mangroves, flamingos, cheetahs, antelope, turtles, falcons, fossils, and vast green oases. Here are some of Abu Dhabi’s best, and most surprising, nature-based spots.

Once a coastal salt flat, Al Watha Wetland Reserve Abu Dhabi has now flourished into natural and manmade lakes that enable many of Abu Dhabi’s species to thrive. Just a 30-minute drive outside of Abu Dhabi, it became the first site in the region to be placed on the IUCN Green List of Protected and Conserved Areas in 2018. The reserve is particularly known for its large population of Greater Flamingos, with as many as 4000 living here during autumn and spring. It also hosts more than 250 species of birds, 37 plant species, and a wide range of marine life. One could take a self-guided walking trail to explore and observe flamingos. While a flamingo spot is guaranteed, rambling through the spectacular landscape you might also come across spiny-tailed lizards, red foxes, greater spotted eagles and beautiful varieties of dragonflies and damselflies.

Kayak through the Mangrove National Park

Apart from providing a safe, sheltered home to hundreds of birds and marine species, mangroves are also highly effective in scrubbing carbon dioxide from the atmosphere. They aid biodiversity and help fight global warming, and are deservingly touted to be among the most fascinating and beneficial plant species. They grow in the sea waters of tropical and subtropical coastal areas, and act as natural windbreakers, protecting against tidal surges and purifying the surrounding water. Abu Dhabi owns a sprawling mass of these important ecological assets at its Mangrove National Park, made up of a dense and thriving concentration of mangrove trees, protected by government order. Gliding on a sea kayak or paddleboarding past their entangled roots, one catches glimpses of Abu Dhabi’s soaring skyscrapers, but the only sounds one hears are of the water lapping at the boat, board, or shore. Along the way, look out for spotted flocks of flamingos or any of the other 60 species of birds that reside in the area, as well as fish and crabs that linger in the peaceful waters.

Meet majestic falcons and learn about the history of falconry

The Abu Dhabi Falcon Hospital (ADFH) was established by EAD in 1999 and opened its doors to an award-winning tourism programme in 2007. It is the world’s leading institution for avian medicine and research, treating and assessing more than 11,000 birds every year. It has now become a major tourist attraction in Abu Dhabi, offering two-hour tours where you can get a unique insight into the history of the sport and the physiology of this significant bird. You’ll be able to see the birds swoop through a free-flight aviary, witness a falcon pedicure and even get up close and personal as a bird perches on your arm. And if you’re marvelling at the significance of falcons in UAE, know that the majestic birds have their own passports. In fact, airlines in the Middle East have been known to have falcons travelling in the passengers’ cabins – and in their own seats! These birds have played a crucial part in the traditional culture of the United Arab Emirates. Traditionally, in the scarce desert environment, falcons helped Bedouins (nomadic people) hunt animals native to the region. Hence, falcons are proudly linked to a heritage that embodies nobility, courage and conservation.

Once abandoned by the Bani Yas tribe because of a lack of natural resources, Sir Bani Yas Island was rescued by the late Sheikh Zayed bin Sultan Al Nahyan, the founder of the UAE. He ensured decades of conservation work and transformed the island into a home for thousands of free-roaming animals and several million trees and plants. A bird sanctuary, as well as a wildlife reserve, Sir Bani Yas Island, is a great place to experience nature through various activities such as culture and history tours, mountain biking, adventure safaris, kayaking, and even pearl diving! Arabian Oryx, Somali ostrich, gazelle and deer, giraffes, dolphins, and over 200 species of birds are among thousands of inhabitants on and near the island.

Listed as critically endangered by the International Union for Conservation of Nature (IUCN), over 80% of the Hawksbill sea turtle population has disappeared over the past three generations, falling victim to coastal development, entanglement in fishing nets, marine debris, pollution, and overexploitation for meat, eggs, and shells. However, in Abu Dhabi, they are protected in the Marawah Marine Biosphere Reserve (MBR), which is an important Hawksbill foraging habitat. Marawah MBR is also critical to marine and coastal ecosystems, being home to more than 70% of migratory birds in Abu Dhabi, housing the second largest population of dugongs, being a crucial nursery and spawning ground for more than 150 species of fish, and home to dolphins and porpoises. Also, the sweeping shoreline of Saadiyat Beach – with its white sand, turquoise waters, and beachside entertainment – attracts a great many visitors to relax, have fun and get a glimpse of the beach’s most esteemed guests – Hawksbill sea turtles. Every year, this 9km beach is home to several Hawksbill turtle nests, with each nest containing between 90 and 100 eggs.

One of the 28 official finalists for the ‘New 7 Wonders of Nature, Bu Tinah Island is protected as a private nature reserve. The tiny archipelago is rich in biodiversity and lies within the Marawah Marine Biosphere Reserve, showcasing a territory of more than 4,000km and being the region’s first and largest UNESCO-designated marine biosphere reserve. Closed to visitors, fishing and the collection of turtle eggs are prohibited, with the bans being enforced by patrols. Seabirds, such as the flamingo and osprey, diverse species of dolphins, Hawksbill turtles, and the world’s second-largest population of dugongs can all be found in and around the island. Bu Tinah’s significant coral community and the health of its habitats and species (despite Bu Tinah’s high temperature and salinity levels) make the island of keen scientific interest.

To know more about the biodiversity of Abu Dhabi, head over to The Environment Agency Abu Dhabi’s website. The agency safeguards the emirate’s natural resources for a sustainable future. Its greatest achievements include setting up the Sheikh Zayed Protected Areas Network, recording 100 unknown invertebrate species, and leading the region in banning larger fishing nets. Do keep these thriving locations in mind while planning your trip to Abu Dhabi.

Previous article – Bhutan – 6 Reasons That Makes It The Happiest Country

Q. What is Abu Dhabi?

A – Abu Dhabi is the capital and second-most populous city of the United Arab Emirates (UAE) after Dubai.

A – You can reach Abu Dhabi by flying into Abu Dhabi International Airport (AUH) or by taking a bus or car from Dubai.

Q. What is the climate like in Abu Dhabi?

A – Abu Dhabi has a hot desert climate with very hot summers and mild winters. The temperature can reach up to 50°C during the summer months and can drop to around 10°C during the winter.

Q. What are the main attractions in Abu Dhabi?

A – Abu Dhabi is home to several famous landmarks and tourist attractions such as the Sheikh Zayed Grand Mosque, Yas Island, Emirates Palace, and the Abu Dhabi Falcon Hospital.

Q. What are the best things to do in Abu Dhabi?

A – Some of the best things to do in Abu Dhabi include visiting the Sheikh Zayed Grand Mosque, taking a desert safari, visiting Yas Island, and exploring the Abu Dhabi Falcon Hospital.

Q. How can I get around Abu Dhabi?

A – Abu Dhabi has a good public transportation system, including buses and taxis. You can also rent a car or use ride-hailing services like Uber or Careem to get around.

Q. What is the currency used in Abu Dhabi?

A – The United Arab Emirates Dirham (AED) is the official currency used in Abu Dhabi and the rest of the UAE.