Things To Do In Maldives 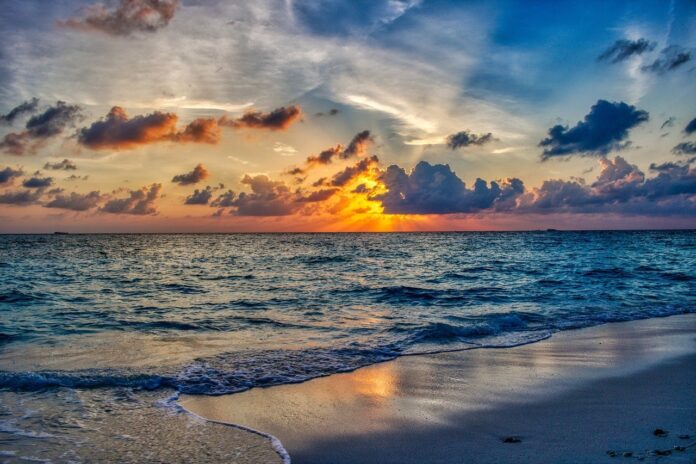 Things To Do In Maldives: The Maldives is an archipelago state located in the Indian Ocean which is known for its luxurious water villas. A tropical haven of white sand beaches, Maldives is located in the south of Sri Lanka and is ideal for an adventure, honeymoon, or leisure vacation. The Maldives is an archipelago of 1,192 atolls grouped into natural atolls. However, only about 200 islands are inhabited. Each resort typically occupies an entire atoll.

Imagine having a room on a pier overlooking the shore with a glass floor beneath which to watch manta rays and reef sharks swim, and looking out over the turquoise waters from your overwater bungalow can. Comprised of 26 atolls (ring-shaped coral reefs that enclose a lagoon), Maldives is renowned for its incredible diving opportunities, the azure waters of the Maldives being home to diverse marine life and corals of varying colors.

The capital city of Male is both the commercial and financial capital. The seat of the executive, legislature, and judiciary, the city has the most well-connected international airport. History lovers will be satisfied with the many buildings in Male houses and monuments of historical importance. The international airport for Male can be reached by boat. Travel to other islands in the Maldives is also quite possible due to the excellent ferry and seaplane connectivity from Male, although it is quite expensive.

10 Best Things To Do In Maldives

Diving is one of the most popular things to do in the Maldives. Some of the diving sites in the Maldives are Fish Head, HP Reef, Banana Reef, and Manta Point.

Fish Head – Mushihasmingli Thila or Fish Head, located in the northern Erie Atoll, is one of the top 10 diving sites in the world, taking its name from the plethora of marine life that one can spot at this popular spot. Initially a habitat for sharks, the government has now declared it a protected marine area. With the characteristics of a thilla, the site is known for its underwater caves, black corals, and rock formations under the sea. The north side of Fish Head is ideal for amateur divers, as it has very interesting underwater landscapes even at shallow depths. Reef sharks are frequent sites here. This reef is considered one of the best for shark spotting as there is ample opportunity to observe shark behavior from safe locations.

HP Reef – Located north of Girifushi in the northern Male Atoll, HP Reef is also known as Rainbow Reef, because of its abundance of colorful soft corals. 10 – 15 minutes by speedboat from Girifushi will take you there. HP Reef is known for witnessing strong currents throughout the year and hence one needs to be very careful while diving here. The main attraction here is the variety of corals found in different colors and shapes, pelagic and other fishes. You can swim in the 25-meter cave, known as ‘Chimney’, while you can observe the diverse marine life.

Banana Reef – Located to the west of Farukolfushi, Banana Reef is actually the size of a banana! It was one of the first dive sites in the country to be known internationally. Banana Reef has it all: dramatic cliffs, caves, and overhangs; spectacular coral growth; large predators such as shark and grouper; and prolific reef fish, including Jackfish, Napoleon Rasse, and Blue-striped Snapper. The reef top is also great for snorkeling.

Manta Point – Manta Point is yet another great highly recommended dive spot. In addition to the multitude of manta rays that give their name, proper patience can reward you with not only eels, and barracudas but also octopuses and turtles. If you are lucky, you will also witness the cleaning services provided by the manta rays. curious? Get the figure for yourself! If you are not staying on a liveaboard, you can rent one from your island resort to reach these diving spots and have the same anchor waiting to pick you up. If you are an amateur you will also need to take ‘orientation’ to learn diving. For all novice divers, PADI licensed instructors to teach you scuba diving and once you complete the course you will be certified.

The tranquil shores of Maldives are perfect for having a private candlelit dinner and it is a unique experience. Some resorts are known for arranging sandbank dinners with the most delicious dishes and sparkling wine from their cuisine and soft music in the background.

Brides Island is a magnificent island in the Maldives famous for its bioluminescent phenomenon known as the Sea of ​​Stars. It is located in Ra Atoll. The Sea of ​​Stars phenomenon is the name given to the mesmerizing waters of Vadhu Island when they glow a brilliant blue under moonlight. The sea is said to glow and shine in such a way that it reflects the stars beneath which the waves lap. This phenomenon is due to the various phytoplankton that can be found in the ocean and glow under the cover of night. The best time to visit the Sea of ​​Stars at Vaadhoo Island is June and October. You can even swim in the sparkling waters.

Vaadhoo Island is also home to some of the most exotic resorts in the Maldives, which offer luxury amenities and villas that seem to be right out of the picture. Also, although Vadhu has not had a large population, it is a great place to learn about the Maldivian and later the prevalent island culture.

A submarine ride in the Maldives is a unique experience and a thrilling way to explore the Indian Ocean. Tours of 45 minutes to one hour are arranged in an AC submarine where you can see whales, colorful fish, and coral reefs.

The Maldives is made up of several islands, each quite different from the others. The more commercial and known ones include Alimantha, Mirihi, Kudahuvadhu, Gana, and Hulhule. You can get from island to island by seaplane or dhoni, local boats with diesel engines – you’ll definitely be spoiled for choice whether you opt for aerial views on a seaplane or on a boat in the cool blue waters flows.

While Gana is the largest island in the Maldives, Kudahuvadhu has ruins that are rumored to be Buddhist temples, Mirihi is named after a local flower, with a characteristic rock and water bungalow. Alimantha Island is another famous diving and snorkeling spot, its shallow waters, are ideal for kids as well.

Ithaa is an underwater restaurant located 5 meters below sea level on the Rangali island Conrad Maldives in Alif Dhal Atoll. It is an acrylic structure, capable of holding 14 persons at a time. The glass terrace offers a panoramic view of the magnificent coral gardens making it one of the most beautiful restaurants in the world.

Ithaa Undersea Restaurant is renowned for serving European cuisine with an Asian influence and has not been damaged by the 2004 tsunami in the region. Apart from being an excellent dining destination, it is also one of the most popular places in the Maldives. Private parties and celebrations such as weddings and anniversaries.

The Maldives is one of the top 5 destinations in the world for dolphin watching as it is home to more than 20 different varieties. Spinner Dolphin, Melon Headed Whale, Blue Whale, and Pilot Whale can be easily seen here. Dolphin spotting cruises are offered by most resorts.

A relatively more relaxing activity for leisure lovers, Maldives is ideal for watching these magnificent creatures during the day and soaking in vivid colors while watching the sunset. The Maldives is home to a wide range of species of both dolphins and whales. The persistent tropical climate, moderate ocean currents, and clear oceans make Maldives one of the best places for dolphin and whale watching.

Those who are cruising on the live board can see these beautiful creatures crossing the water from time to time. Those of you who have settled into the resorts can ask your resort/hotel to arrange a dolphin and whale watching tour on a boat and be dazzled while nature is home to more than 20 species, including rare species. appears in. Watch the sunset from the Maldives skyline up close to your island. It is an absolute spectacle when you watch the spectacular view of the red-colored skies changing while the sun sinks into the endless waters.

Although Gan Island is 541 km from the capital of Male, Gan International Airport makes it easily accessible. This is one of the attractions of the island as it is no hassle to reach and yet it is miles away from the other islands of Maldives, it is a private, isolated experience.