Sidi Bou Said, Tunisia: All About The City 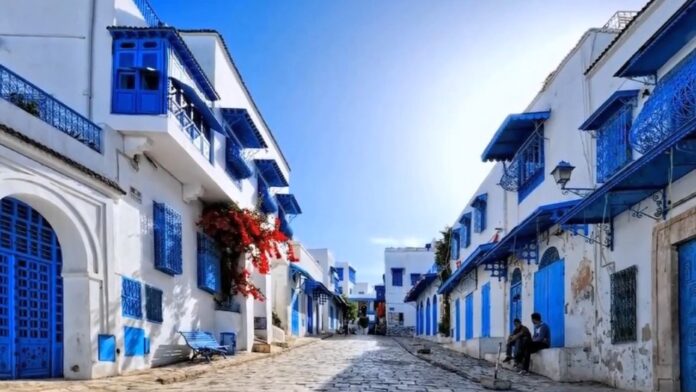 Approximately 12 miles/20 kilometers north of Tunis lies the idyllic seaside town of Sidi Bou Said. Perched on top of a steep cliff and surrounded by breathtaking Mediterranean views, it’s the perfect antidote to the hustle and bustle of the Tunisian capital and a favored getaway destination for locals and visitors alike. The town’s cobbled streets are lined with art shops, souvenir stalls, and quaint cafés. Brilliant blue-painted doors and trellises contrast beautifully with the pure white of Sidi Bou Said’s Grecian buildings, and the air is scented with trailing bougainvillea.

The town is named after Abu Said Ibn Khalef Ibn Yahia El-Beji, a Muslim saint who spent much of his life studying and teaching at the Zitouna Mosque in Tunis. After journeying through the Middle East on a pilgrimage to Mecca, he came home and sought the peace and quiet of a small village on the outskirts of Tunis named Jebel El-Manar. The village’s name meant “The Fire Mountain”, and referred to the beacon that was lit upon the cliff in ancient times, to guide ships navigating their way through the Gulf of Tunis. Abu Said spent the rest of his life meditating and praying in Jebel El-Manar, until his death in 1231.

His tomb became a pilgrimage site for devout Muslims, and over time, a town grew up around it. It was named in his honor – Sidi Bou Said.

It wasn’t until the early 1920s that the town adopted its striking blue and white color scheme, however. It was inspired by the palace of Baron Rodolphe d’Erlanger, a famous French painter, and musicologist known for his work in promoting Arab music, who lived in Sid Bou Said from 1909 until his death in 1932. Since then, the town has become synonymous with art and creativity, having provided a sanctuary for many famous painters, writers, and journalists. Paul Klee was inspired by its beauty, and author and Nobel laureate André Gide had a house here.

For many visitors, the most rewarding way to spend time in Sidi Bou Said is simply to stroll through the Old Town, exploring winding side streets and stopping to explore the town’s art galleries, studios, and restaurants at leisure. The sidewalks are lined with stalls, whose wares include hand-crafted souvenirs and bottles of fragrant jasmine. Make sure that your wanderings take you up to the lighthouse, where spectacular Gulf of Tunis views awaits.

When you tire of walking, pay a visit to the home of Baron Rodolphe d’Erlanger. Named Ennejma Ezzahra, or Sparkling Star, the palace is a testament to the baron’s love of Arabic culture. Its Neo-Moorish architecture honors the age-old building techniques of Arabia and Andalucia, with a beautiful arched doorway and stunning examples of artisan wood carving, plasterwork, and mosaic tiling. The musicologist’s legacy can also be explored at the Centre des Musiques Arabes et Méditerranéennes.

There are only four hotels to choose from in Sidi Bou Said. Of these, the most popular is La Villa Bleue, a magnificent traditional home nestled on the cliffside above the marina. Rendered in the customary shades of blue and white, the villa is a masterpiece of slender columns, intricate plasterwork, and cool marble. With only 13 rooms, it offers an intimate, relaxing experience that ties in with the town’s reputation as a traveler’s sanctuary. There’s a gourmet restaurant, two outdoor swimming pools with panoramic sea views and a spa. After a busy day spent exploring the town, return for a traditional hammam and massage.

When it comes to restaurants, you’re spoiled for choice — whether you’re looking for a fine-dining experience or a cheap bite in an authentic café. For the former, try Au Bon Vieux Temps, a romantic garden restaurant with a mouthwatering menu featuring the Mediterranean and Tunisian classics. The food is complemented by mesmerizing ocean views and attentive service, and the wine list offers the chance to try regional Tunisian vintages. If you’re thirsty rather than hungry, head to Café des Nattes, a Sidi Bou Said landmark loved by locals and tourists alike for its mint tea, Arabic coffee, and shisha pipes.

If you’re traveling to Tunisia as part of a tour, it’s highly likely that Sidi Bou Said will be one of your planned stops. In this case, you’ll probably arrive on a tour bus and won’t have to worry too much about how to get there. However, those that plan on exploring independently will find it equally easy to reach the town either in a hire car, a taxi or with the help of public transport. Sidi Bou Said is connected to central Tunis by a regular commuter train, known as the TGM. The journey takes approximately 35 minutes. Those with reduced mobility should be aware that it’s a steep walk from the train station to the heart of the Old Town.

Must Read – Countries of Europe – A Wanderlust for Life

Q. Which are the famous restaurants at Sidi bou said?

Q. What are the best Hotel options at Sidi bou said?

A. In the 12th century/13th century AD Abu Said Ibn Khalaf Yahya al-Tamimi al-Beji arrived in the village of Jabal el-Menar and established a sanctuary. After his death in 1231, he was buried there. In the 18th century Turkish governors of Tunis and wealthy citizens of the latter built residences in Sidi Bou Said.

Q. Which is the nearest airport for Sidi bou said?