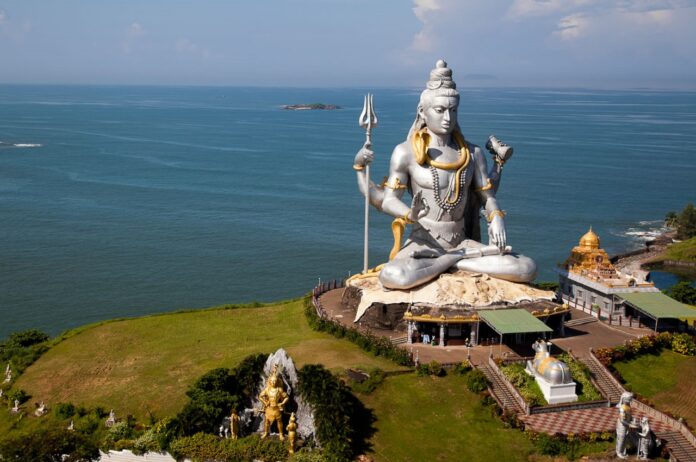 Murdeshwar is a beautiful combination of spirituality and seaside paradise. A coastal town located in the Uttara Kannada district is attracting tourists from all over the world for several reasons, which we have covered in this blog.

Since 2006, the Shiva statue has stood as an illuminating symbol of peace and wisdom. It is visible from quite a distance due to its staggering height of 123 feet. The mythology and history associated with Murdeshwar are captivating because of its reference to the ancient Indian epic – Ramayana.

According to legend, the demon king Ravana was returning to Lanka (his home) with the Atma Lingam (helps to attain immortality) given by Lord Shiva on one condition it should not be left on the ground except in Lanka.

But Lord Ganesha tricked Ravana with the help of Lord Vishnu and the soul lingam was placed on the earth. This enraged Ravana, who used all his might to remove the lingam from the ground, and in that pursuit, some parts were scattered nearby.

Once you visit the artificial cave beneath the Shiva statue, an interesting light and sound show depicts the same legend with the use of beautiful and colorful scriptures. This is the best attraction after the idol in this coastal town of Karnataka.

Must-Visit Places in and around Murdeshwar

Legend has it that, this place is the home of Lord Shiva and is known for its mesmerizing carvings and sculptures which are quite huge. Surrounded by the Arabian Sea and the hills of the Western Ghats, this Shiva temple is surrounded by sea on three sides which offers spectacular views of sunset and sunrise.

Another marvel is the 21-storey Raja Gopuram which is the second tallest in the world. The 18th floor has an observation deck that can be accessed via a lift. It offers a splendid view of the idol along the beautiful coastline. Temple Timings: 6 am to 1 pm and 3 pm to 8 pm.

Families who have completed their spiritual journey can continue to enjoy the safe and clean beach which is within walking distance from the statue. It is a bit crowded on weekends or holidays. You can enjoy street food or visit nearby restaurants for delicious Karwar and Udupi delicacies

Many of us have a monotonous impression of old forts and monuments but this is something extraordinary. It is about 60 km (1 hr 20 mins drive) from Murdeshwar. The fort was built by Rani Chennabhaira Devi (popularly known as the ‘Queen of Pepper’) in the 16th century. A great place for history buffs to explore the story and fusion of Deccan as well as Mughal architecture.

This place is quite deserted and inauspicious even on bright days. The huge structure of Mirjan Fort is rusted which is powerful and impressive at first sight. You can find deep wells, infrastructure, prayer halls, secret doors, watchtowers, tunnels, flag poles, and images of many Hindu gods and goddesses which are the main attractions of this fort!

Famous for its heart shape and known as Pigeon Island, it is about 19 km from Murdeshwar Temple. The main importance of the island is its well-preserved coral reefs and the species of fish that surround it. The island is prohibited from diving on its own without safety equipment due to its steep and sharp cliffs.

It is a small waterfall yet mesmerizing to your eyes. The beautiful sunset from the hill really gives a positive vibe. The place looks like a lagoon with a waterfall of 10-12 meters and you can take a dip in the cool water to refresh yourself. It is about 25 km from Murdeshwar.

The temple of Goddess Parvati is one of the most popular pilgrimages in South India. With a history of more than 1200 years, the idol of the goddess is wonderfully carved using an alloy called Panchaloha which contains five metals namely gold, silver, copper, iron, and lead.

There are certain rules to be followed to enter the temple such as dress code, timing, type of worship, and others. The distance of this temple from Murdeshwar town is about 65 kilometers (1.5 hours drive).

Located on the beach of Bhaktal town, Jali Beach is the familiar Jolly Beach with beach resorts, houses, Havelis, and shopping complexes. The beach is arched by many coconut trees which add to the beauty of the place. This beach is only 40 minute drive from Murdeshwar.

It is also known as Kudumari or Beligundi Falls and is considered one of the best trekking places in Karnataka. The waterfall falls from a height of 300 feet which provides a natural delight. To witness this beauty, it is suggested to hire a local guide or join a trekking club as the trek route through the dense forest can be arduous.

There is a strong possibility of missing the right path. It is recommended to carry essentials like a water bottle, snacks, and an extra pair of clothing as the trial is difficult. Various species of birds can be seen along the way and during the monsoon, it will be a pleasure to visit this place which is about a 1-hour drive (40 km) from Murdeshwar.

This port city of Karnataka is well connected to many tourist attractions like Bhatkal Falls, Beaches, Jog Falls, Lighthouses, Temples, and Mosques.

This place is also known as the hidden destination where you can discover unknown places for the regular itinerary. Bhatkal is only 20 minute drive (15 km) from Murdeshwar.

These caves are made of vertical black limestone and are surrounded by dense green forests. Thus, it seems like a beautiful artifact of nature that can be accessed through a trek.

Also, you can explore the mighty Vibhuti Falls nearby which is about 70 feet and is surrounded by lush greenery.

There is a 1.5 km trek to reach this thrilling spot from the parking lot. The water is clear and the perfect place for unlimited fun. From Murdeshwar, both these places are 90 minutes’ drive away.

This blog would be incomplete without a mention of the seaside paradise 80 km from Murdeshwar. It is popular across the world and is considered by many as a better alternative to Goa. Thrill-seekers are attracted by the Hili Beach Trek which covers Om, Kudle, Half Moon, Paradise, and Belekan beaches.

The best part about Gokarna is its crystal clear beaches, comparatively less crowded than Goa, a mix of Indian and international culture, beach shake parties, beach yoga, and Ayurvedic spas and massages. We suggest exploring Gokarna before or after your trip to Murdeshwar, as a day trip to Gokarna will not satisfy your wanderlust!

The best time to visit Murdeshwar to enjoy the weather and experience the natural beauty of this place is between October to March.

How to reach Murdeshwar

By Road – Karnataka State Buses (KSRTC) connect Murudeshwara with major cities like Bengaluru, Kumta, Karwar, Hubli, Mangalore, and Panjim (Goa). Also, one can self-drive in these cities and it is better to use it. Own vehicles are expensive as are auto rickshaws and local transport. The temple is just one km away from the National Highway (Kanyakumari-Mumbai), so it is easily accessible.

By Train – Murudeshwara (MRDW) is a railway station that is well connected to most of the railway junctions in India. Also, one can opt for the train stopping at Bhatkal or Honnavar railway station as they are closer to Murudeshwar.

Q. Why is Murudeshwar famous?

A – This unique city is most famous for the second-tallest statue of Lord Shiva in the world. The backdrop of the glittering Arabian Sea and the lush green Western Ghats make the experience even more spectacular and grand.

Q. How many days is enough for Murdeshwar?

A – Murudeshwar is famous for the world’s second-tallest Shiva statue (123 feet) and the tallest temple tower (249 feet) of the Murudeshwar Temple. Usually, 2 days are required to locate Murudeshwar tour packages.

Q. What is the story of Murudeshwar?

A – Origin and History. The origin of the name “Murdeshwar” dates back to the time of Ramayana. Hindu deities attained immortality and invincibility by worshiping a divine linga called the Atma-linga. The Lankan king Ravana wanted to attain immortality by obtaining the Atma-linga (the soul of Shiva).

Q. Which is the best time to visit Murudeshwar?

A – Murudeshwar is a pilgrimage center. The best time to visit Murudeshwar is October, November, December, January, and February. Since it is the peak season, expect some rush during this time. The period of March, April, May, and June experiences moderate weather.

Q. How far is Udupi from Murudeshwara?

A – The distance between Udupi to Murudeshwar by road is 102 km.

Q. Is Murudeshwar worth visiting?

A – Famous for the world’s second tallest Shiva statue, the city is situated on the coast of the Arabian Sea and is also famous for the Murdeshwar Temple. Murdeshwar has a railway station on the Mangalore-Mumbai Konkan Railway route.

Q. What should I wear in Murudeshwar?

A – Dress Code : Men: Only Dhotis, no T-shirt, jeans, pants. Women: only Saree and Churidar with dupatta.

Q. Are Gokarna and Murudeshwara the same?

A – The town was earlier known as ‘Mrideshwar’ and later the name was changed to Murudeshwar after the construction of the temple. According to legend, Ravana brought the Atmalinga from Mount Kailash. Lord Ganesha using his tricks fooled Ravana on his way to Lanka and placed the linga on the ground at Gokarna.

A – Murudeshwara Temple is open for visitors.