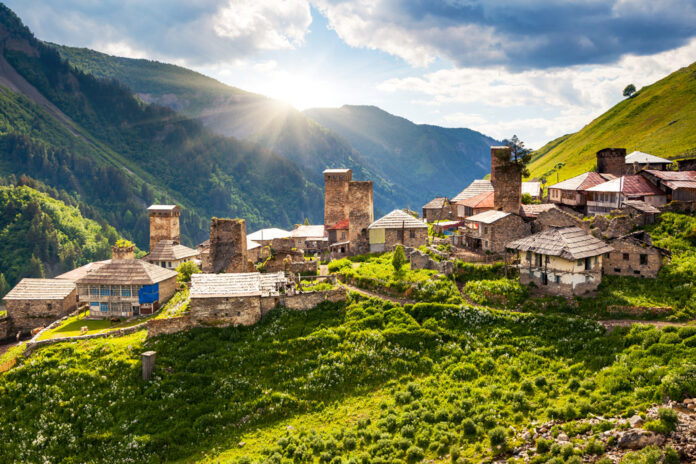 The heroine of the famous book “Eat, Pray, Love” has traveled halfway around the world to get gastronomic pleasure, gain spiritual enlightenment and understand a high feeling. We affirm that she wasted so much time and effort: everything that a person needs for happiness is in Georgia!

Georgian national cuisine has long won thousands of hearts around the world: such names as khachapuri, chakhokhbili, kharcho, and chicken of tobacco are known even to people who have never been to Georgia. But the real taste of these and many other dishes can be learned only by visiting this sunny country, as well as taking part in a real Georgian feast. In Georgia, there is a saying that during a feast, time stops, and hours spent in the company of guests do not count towards life. That is why the feasts are so long and wordy, and the hosts are incredibly generous. The main thing at the table is love and family, there is no place for disputes and contradictions. The toasts are long and florid, but always with deep meaning and seasoned with stories from the personal experience of the toastmaster. Toastmaster, by the way, is not accepted to pay, because this is not a job, but a real vocation.

The dishes of Georgian cuisine are spicy and spicy, and their taste is ideally set off by the unleavened, but surprisingly tasty Georgian shoti bread, which is baked in special round brick ovens. They say that the bread comes out especially tasty, soft, and crunchy when sung while baking. In Georgia, you must definitely try khinkali and barbecue, the main thing is not to forget that it is customary to eat both of these dishes with your hands, even in a restaurant. As a tasty souvenir, you should bring a juicy fresh churchkhela.

Wine occupies a special place in the gastronomic culture of Georgia. During archaeological excavations on the territory of Georgia, jugs for wine and stone presses were found, which were used several thousand years before our era! Today, Georgian wine is supplied to 40 countries of the world, and at home, not a single meal is complete without a grape drink. It is believed that different varieties of wine not only have different tastes but also have a different characters, which can be understood only after the third glass. And the drinking devices themselves in Georgia are very different: jugs, special cups and scoops, horns of different sizes decorated with silver, there is even a half-liter ceramic vessel in the shape of a baby cradle, from which it is customary to drink for the birth of a child. Each toast will certainly end with a chorus of “Gaumarjos!”
It is customary to drink the first toast to the bottom, and it is always “for God!”

The majority of the population of Georgia is Orthodox. Christianity came to the country at the beginning of the 4th century, that is, much earlier than the Baptism of Rus. The Most Holy Theotokos is considered the patroness of Georgia, and many churches and monasteries have been preserved since medieval times. But the main thing is that your belonging to any confession does not matter, just Georgia is the country where you can feel divine protection, become closer to nature, to the world, and to people.

In Georgian myths and legends, Jesus and the Virgin Mary easily coexist with giants, demi gods, and other characters borrowed from Greek mythology. God in Georgia is cheerful, kind, and supportive, especially towards Georgians. According to legend, the Georgian people were late for the distribution of lands by God, because they had a feast and raised toasts to His glory. God was very moved by this, and he gave the Georgians a piece of paradise, reserved for himself.

The main sacred place and heart of Georgia’s spiritual life are considered its first capital – the city of Mtskheta. Legend, in a nutshell, says that one native of this city, Elios, happened to be in Jerusalem after the death of Christ, where he managed to redeem the tunic of Jesus. Elioz brought the tunic to his hometown and showed it to his sister, and she squeezed it in her palms and died of happiness, they could not unclench her palms, so they buried her along with the cloth. On the site of the grave, a cedar grew, which was cut down to build a church, but only the holy log floated in the air and did not want to get up in place. Saint Nino with prayer lowered the log, and the erected church was named Svetitskhoveli, which means “Life-giving pillar”.

This story clearly demonstrates the essence of Georgian spirituality – a long story, like a traditional national toast, a little confusing, but which makes you feel warm and joyful in your soul. Every temple and shrine has this kind of history, so sightseeing tours will make an indelible impression even on people who are far from religion!
But even more than stories about God and saints, Georgians love stories about love.

“Love is in the air” is about Georgia. The surprise of foreigners at the local cordiality and hospitality, in turn, surprises the Georgians themselves. After all, every guest is received here as a family member whom they have known and loved for a long time. Love for a mother is considered sacred in Georgia, so the greatest insult for any man is disrespect for the woman who gave him life. But romantic love is no less revered. So, on April 15, the Day of Love is celebrated in Georgia. This holiday was adopted by the parliament at the end of the last century as an alternative to the European Valentine’s Day, but the ardent Georgian youth began to celebrate both with joy.

The most romantic city in Georgia is Batumi. Everything here disposes to love: the unhurried rhythm of life of the seaside resort, picturesque sunsets, the embankment very gently decorated with touching sculptural compositions. About some cities they say that you can leave your heart there, in Batumi, on the contrary, you get the feeling that this city gives you a piece of its own.

There are many legends about love, and one of the most romantic forms is the basis of the novel “Ali and Nino” by the Azerbaijani author, who wrote under the pseudonym Kurban Said. The novel takes place for the most part in the Caucasus: in Azerbaijan and Georgia, and the story itself tells about the love of a man and a woman, for which neither different cultures and religions, nor people, nor distances can become an obstacle. Inspired by this touching story, Georgian sculptor Tamara Kvesitadze designed in 2007 the dynamic sculpture “Ali and Nino”, which was installed in Batumi in 2010 after a presentation at the Vienna Biennale. The sculpture represents the figures of a man and a woman who move towards each other and merge into a single whole.

For love, you can go to Georgia together, or you can go alone. In the first case, fresh air and hot wine will undoubtedly warm up your feelings, but if you happen to visit Georgia without a second half, you will be pleasantly surprised, from the first minutes you will feel like in the circle of a loving family.

Previous article
Sabarimala: A Complete Guide
Next article
Kenya – The recipe for the perfect safari