Church of the Ascension in Kolomenskoye 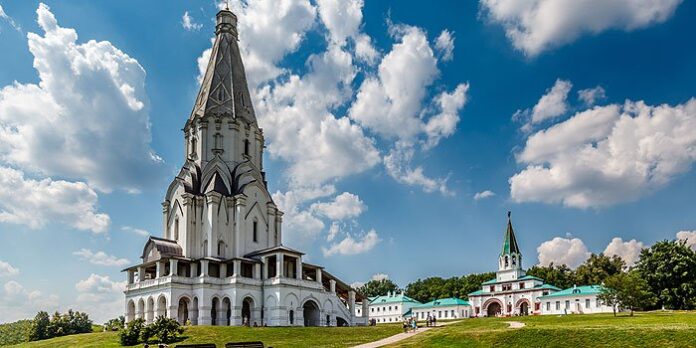 The Church of the Ascension was built in 1532 on the royal estate of Kolomenskoye near Moscow, to celebrate the birth of the prince, who was to become Tsar Ivan IV (‘the Terrible’). One of the earliest examples of a traditional wooden tent-roofed church on a stone and brick structure, it had a great influence on the development of Russian ecclesiastical architecture.

Outstanding Universal Value | Church of the Ascension in Kolomenskoye

The Church of the Ascension was built in 1532, in the royal estate of Kolomenskoye near Moscow, to celebrate the birth of the prince, who was to become Tsar Ivan IV “the Terrible”. The church is now situated near the center of Moscow on a steep slope that descends into the floodplain of the Moscow River. The church represented a new stage in Russian architecture. It is the first church with a tent-roof which is made of stone.

The remarkable tent’s roof rises from an octagonal base crowned by small kokoshniks; The base also rises from a larger base which is formed by a series of kokoshniks. The gallery, accessed by stairs at different levels, surrounds the church. In the eastern altar part of the gallery, facing the Moscow River, is a “royal pew” in the form of a throne with a white stone ciborium above it. Due to this specific construction, the walls are 2.5 to 3 meters thick, making the interior very small, although the 41 meter high ceilings create a sense of spaciousness.

The church is of great importance to town planning, dominating the surrounding architectural structures and landscape, and providing visual unity to all elements of the property. The Church of the Ascension is unsurpassed in its amazing beauty and grandeur of form and was built in the 16th century despite the strict principles of church architecture.

Its one-column construction differed from the usual five-dome structure on four pillars, making it a monumental sculpture with architectural features, incorporating the best of Byzantine, Greek, Roman, Gothic and ancient Russian traditions. The example of the Church of the Ascension in Kolomenskoye became widespread throughout the country by the middle of the 17th century. The tent-like style was important and decisive for Russian architecture, as it later became the embodiment of the Russian national architectural tradition.

The Church of the Ascension in Kolomenskoye is a single whole and all the attributes expressing its outstanding universal value are within the marked limits. Neither feature is threatened by contemporary development or neglect. All the qualities are still present and have maintained physical integrity as well as the dynamic functions between them. Both the exterior and interior of the church clearly demonstrate the unity of structural and decorative intent that is typical of Russian architecture.

During the period from 1532 to 1920, the Church of the Ascension had six different iconostases. During the complex restoration of 2003–2007, a complete reconstruction was carried out based on the ‘Tsar’s Gates’ of the original 16th-century iconostasis.