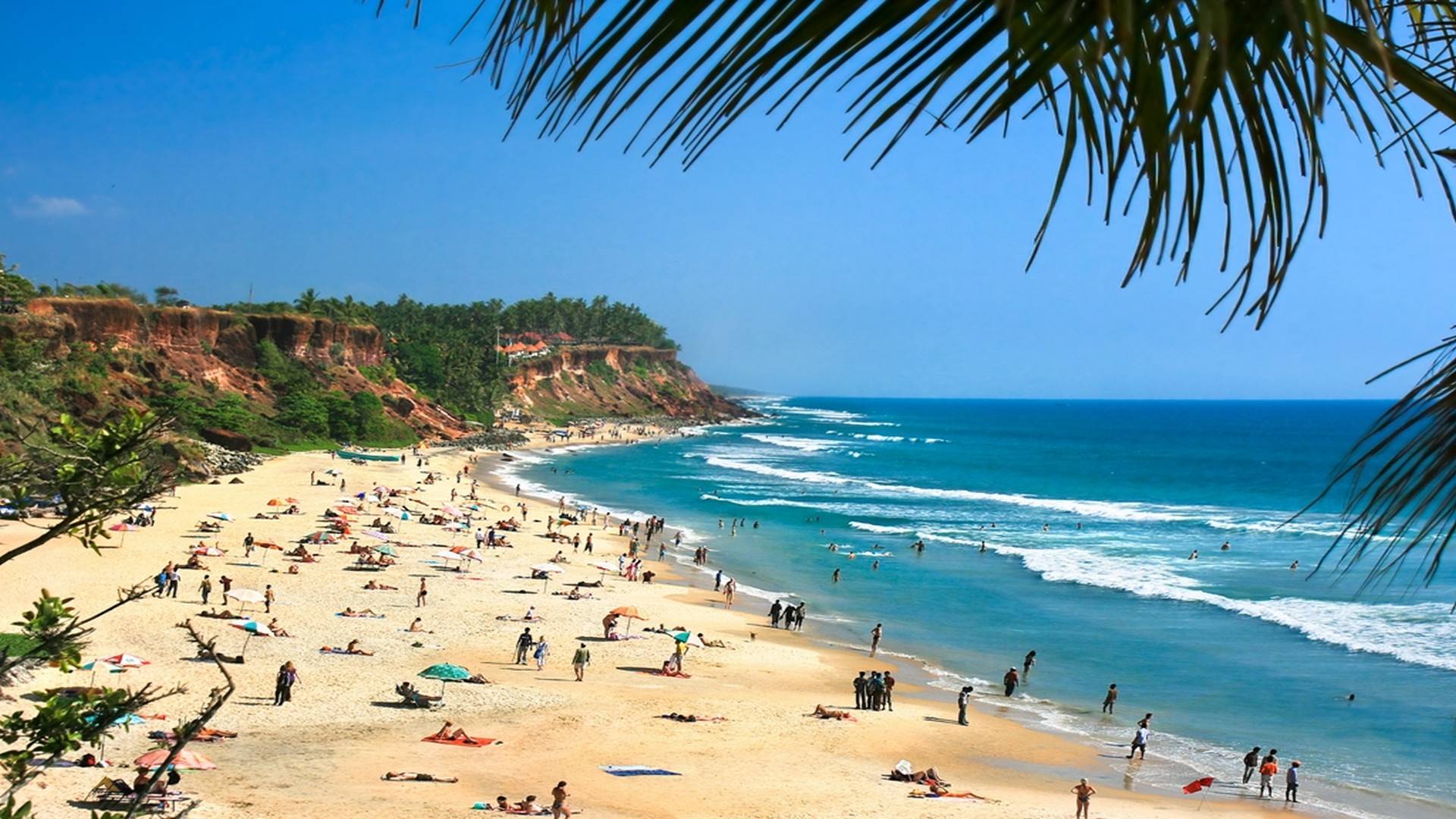 A serene coastal town fringing the Arabian Sea, Varkala is a municipality in Trivandrum about 51 kilometers (32 miles) to its north-west. The soaring cliffs lining the azure sea and jutting into it in places make the Varkala landscape exceptional and striking. On either side, the cliffs are speckled with mineral water sprouts and spas. Legend has it that sage Narada was once accosted by a few friars who conceded to having sinned. On hearing this he hurled his ‘valkkalam’ (the bark of a tree worn by mythical sages) into the air. And the place where it landed later came to be known as Varkala. Narada then asked the friars to pray for their redemption at this newly created site by the seashore; the place is Papanasam beach to be more precise. 10 must-visit places in Varkala.

Behold this breathtaking scenery of cliffs thick with swaying palms standing sentinel over the sea, and down below a pristine stretch of sand laid-out like a ribbon washed by small white waves. Geologists have coined the term ‘Varkala formation’ for these red sedimentary cliffs that are a unique geological feature in the otherwise flat Kerala coast. So much so the Geological Survey of India has declared it a geological monument. On either side, the cliffs are speckled with mineral water sprouts and spas. These mineral springs are believed to have curative properties.

This isolated sandy expanse is an ideal place for a quiet holiday – a great opportunity to commune with nature, click pictures, enjoy the tropical sun and go for a refreshing swim while being far away from the maddening rush of other busier beaches. To get to a more secluded and pristine part of the beach, you would have to clamber over rocks during high tide or scramble down the cliff. While taking this route you will notice that a path has been etched into the hill face with constant use. The solitary aura of Varkala adds to the sunset-viewing experience. Watch the ball of molten gold fade and disappear into the sea leaving behind a tinge of scarlet and orange in the water and the sky.

Amid tall palm groves and neatly tended lawns nestles the architectural Sivagiri Mutt atop a steep cliff – Sivagiri hill – soaring over the bright blue sea of Varkala. This deeply revered pilgrimage center of the Keralites is about 3 kilometers (1.87 miles) from the iconic Janardhana Swamy temple. Built-in 1904 the Sivagiri Mutt is the headquarter of Sree Narayana Dharma Sangham Trust founded by the renowned spiritual leader and social reformer Sree Narayana Guru (1856 – 1928). Today the mutt is home to the memorial of the great philosopher and receives throngs of believers from across Kerala and outside during the annual festival (30th December to 1st January).

Janardhanaswamy temple is a 2000-year-old Vishnu shrine perched on a steep cliff lining the Arabian Sea in Varkala. The original temple was destroyed by tidal waves only to be rebuilt many years later by a Pandyan king. A fine specimen of traditional South Indian architecture, the temple is a circular building with a red-tiled roof housing the main shrine and speckled with colorful sculptures of deities from Hindu mythology. Appreciate its typical features such as the circular sanctum sanctorum surmounted by a conical dome of copper sheets, the beautiful wooden carving of navagraha (meaning nine planets) on the ceiling of the square mandapam with quadrangular enclosures around them.

Papanasam (meaning redemption from sin) is a secluded 500-meter stretch of white sand between the steep red cliffs covered with coconut palms and the azure Arabian Sea. This is one of the main beaches of Varkala and a deeply revered Hindu pilgrimage site. Locals believe that a dip in the holy waters of this beach washes away all sins and thereby purifies the body and spirit – hence the name. The sunsets here are truly glorious. Spend the evening lounging on the beach and watch the massive red orb slip into the sea leaving behind a tinge of orange in the sky.

An important trading station of the British, Anjengo Fort is about 36 kilometers (22.5 miles) north of Trivandrum city and some 18 kilometers (11.25 miles) from Sivagiri Mutt in Varkala. This is a lovely seaside drive from the mutt and opens up innumerable photo opportunities. On a sightseeing excursion around Varkala, it is worth popping into this fort set up by the English East India Company as a strategic garrison in 1684. The structure was raised in 1695 as a signal station or lighthouse for ships coming in from England. Anjengo literally stands for ‘Anju Tengu’ meaning five coconut trees in Malayalam.

Once considered an engineering marvel, the Varkala Tunnel is a 924-foot-long (277 meters) stretch of inland waterway built by the British as a trade route. It is a significant historical landmark in Varkala and a must-see on a sightseeing excursion. Etched out under a cliff, this century-old tunnel is about 41 kilometers (25.6 miles) from Trivandrum. A huge vent on the roof opens up this dark underground structure to fresh air and sunshine. Work on the tunnel began in 1869 and took 14 years to be completed.

About 6 kilometers (3.75 miles) north of Varkala town is the scenic Kappil Lake that gives way to the enchanting world of Kerala backwaters. This serene estuary meanders through dense coconut groves before merging into the Arabian Sea. The bridge over the lake is quite a vantage point to view the backwater stretching white and grey to the distant blue horizon. Boating is another great way to browse this tranquil waterway. For this measure Kerala tourism has set up the Kappil Boat Club in the area, from whom you can hire row/pedal boats.

This one is a short distance from Varkala town near Kappil backwaters. Vettekkada is an isolated stretch of fine sand affording stunning sunset views. Lounge on the beach and spend indolent hours gazing at the azure slopes while soaking up the tropical sun. Capture from different perspectives the blue sea merging with a clear blue sky.

The frequency of visitors at the Kaduvayil Thangal Dargah on the National Highway 47 establishes that there is more to Varkala than just pristine beaches and luscious environs. Many spiritually-inclined tourists also make a beeline for Varkala, courtesy the Sivagiri Mutt and this little mausoleum of a Sufi saint on the highway between Kallambalam and Attingal. Locals and tourists from across the country irrespective of their religion visit the dargah to seek the blessings of Kaduvayil Thangal, a revered Muslim saint.

The verdant Ponnumthuruth (meaning Golden Island) is in the middle of the placid backwaters near Varkala. Untouched now for centuries, this virgin island is a vibrant ecosystem home to a variety of flora and fauna. There is a still beauty about the place, occasionally broken by the rustling of wind through palm trees, the twittering of birds, or the gentle lapping on the water on the white beach. Amble down the coastline, enjoy the refreshing sea breeze and listen to the fishermen as they hum earthy songs while casting their nets in the lake.

Frequently Asked Questions About Things To Do In Varkala

Q – What is the best time to visit Varkala?

A – It has a tropical climate, so winters and summers are the best times to visit Varkala because in the rainy season the place receives heavy rainfall.

Q – Can I take a flight to reach Varkala?

A – There are no direct flights to Varkala. The nearest airport is at the Thiruvananthapuram Airport which is mere 40 km away. You can take a train or bus from there.

Q – How can I reach Varkala from Chennai?

A – Trains are most comfortable and there are lots of them that go to Varkala from Chennai. You can also opt for a bus or consider renting a car.

Q – Is Varkala a safe place?

A – Definitely, it is. With crime rates as low as it can be, just take the basic precautions and you are good to go. The number of reported cases for travelers is extremely low and because this place is a tourist hub, there is no safety concern for potential visitors.

Q – Do all the beaches in Varkala have good swimming conditions?

A – Well, no. Most of them are not fit for swimming because of their powered rollers and undertows. Only some select beaches are good for swimming.

Q – Are there any restrictions on clothing in Varkala?

A – Absolutely not. Any western attire is acceptable but only of course not in or around the religious sites. Travelers are free to wear any type of clothing they want but they must check with certain religious or traditional institutions where entry may be denied as they have certain societal restrictions in place.

Q – Is alcohol allowed in Varkala?

A – Varkala is regarded as a holy site, so not many options for alcohol are available on the beach. Only a shack or two at remote beaches might be able to sell alcohol at the beach. But alcohol is available at the resorts and restaurants.