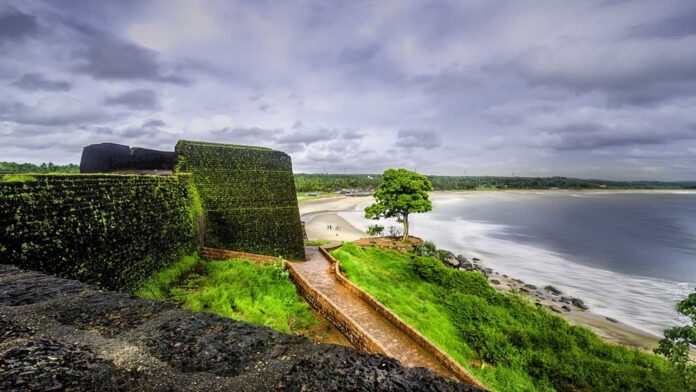 Bekal is touted to become Asia’s finest beach destination soon. Located in Kasaragod, the northernmost district of Kerala, it is home to the imposing Bekal Fort. This mammoth keyhole-shaped fortress of laterite looms large against the backdrop of the Arabian Sea. It happens to be one of the largest and best-preserved forts in Kerala. Rising 130 feet above sea level, it stands on a 35-acre headland that runs into the Arabian Sea. A wide trench surrounds the fortress. In the days of yore, enemy movements were watched from the numerous peepholes that are located at strategic points within the fortress. The below article is about Bekal the top places to visit.

As you stand on the ramparts of this fortress (some of the ramparts mounted with huge cannons, still look imposing today), you get spectacular views of the surroundings; especially that of the Arabian Sea. Flanking the Bekal Fort is a golden expanse of beach. You can take a stroll on the beautiful walkway that has been laid here recently. Mani Ratnam, the renowned filmmaker from Chennai shot a song of his highly acclaimed film ‘Bombay’ at the Bekal Fort.

Tucked away in the village of Pallikkare, about 16 kilometers south of Kasaragod town is the Bekal Fort. This mammoth keyhole-shaped fortress of laterite that looms large against the backdrop of the Arabian Sea is one of the largest and best-preserved forts in Kerala. The Fort was built between 1645 and 1660 by Sivappa Naik of the Thelkkeri dynasty of Bedanore. The latter was also known as Ikkeri Naikkars as well as Keladi Nayakas. Sivappa Naik who rose to power in 1645 is widely considered to be the ablest and greatest in the Thelkkeri dynasty. He fought successful battles against the Bijapur Sultans, the Mysore rulers, and the Portuguese. He was not only an able administrator, but he also patronized literature and fine arts. Sivappa Naik’s kingdom included large parts of present-day Karnataka. The Fort happens to be one among a chain of forts built by Sivappa Naik for the defense of his kingdom. By 1763, the Bekal Fort had slipped into the hands of Tipu Sultan.

About 4 kilometers north of the Fort, near the confluence of the Payaswini River and the Arabian Sea, lies the Chandragiri Fort. This fortress which is perched atop a hillock was one among a chain of forts built in the 1650s by Sivappa Naik of the Thelkkeri dynasty. The now derelict Chandragiri Fort spread over 7 acres happens to be a protected monument under the archaeology department of Kerala. If you can scramble up the steep steps of the Chandragiri Fort, you get to enjoy some breathtaking views of the gently flowing river and the Arabian Sea from here. Chandragiri has listed in Bekal the top places to visit It is also a vantage point to enjoy splendid sunsets.

The Malik Ibn Dinar mosque happens to be one of the oldest mosques in India. This historical mosque is located at Thalankara (the famous handmade Thalankara caps come from here), about 15 kilometers north of the Fort. Malik Ibin Dinar, one of the 13 followers of Prophet Mohammad who came to Kerala in 628 CE, is said to have built this mosque. Malik Ibin Dinar is credited with having bought Islam to India. He constructed 9 mosques across Kerala.

30 kilometers north of the Fort on the Kumbala-Badiadka Road lies Ananthapura Lake Temple, the only temple that is located in a lake in Kerala. This temple is located bang in the middle of the Ananthapura Lake. The latter in turn is situated on a rocky hill. The main deity of this temple is Ananthapadmanabha, Lord Vishnu reclining in the Ananthasayana pose on his serpent-god. This temple was built in the 9th century out of granite. The inner sanctum of the temple can be reached by a footbridge. The interiors of the temple are adorned with exquisite wood carvings, murals, and paintings. The temple has a chuttambalam or an enclosed verandah around the temple. A lone crocodile (it is said to be vegetarian) in the temple pond has been guarding the Ananthapura Lake Temple since 1945.

Anandashram is an internationally renowned spiritual center that was started by Swami Ramdas in 1931. It is located about 15 kilometers from Bekal. The aim of human life is the realization of God – the easiest way for achieving it is said to be the constant remembrance of God. Chanting the divine name is the mainstay of Anandashram. Swami Ramdas had emphatically stressed the need for chanting the holy and all-powerful divine name.

Bekal is today emerging as the gateway for exploring the Malabar region of Kerala. An investment of about Rs. 750 crores are being pumped into Bekal to convert it into the largest beach resort in Asia by the year 2011. The Bekal Resorts Development Corporation (BRDC) has leased out land for setting up of six 5 star hotels within a radius of 10 kilometers of the Fort. The first of these 5-star hotels opened its doors to visitors, earlier in the year. The second one will do so by October 2010. Work has also commenced on the construction of two more 5 star hotels. BRDC is shortly going to start work on an Rs. 3 crores cultural complex at Bekal that will showcase the history, culture, and art of this region. The state highway that leads to the Fort is being developed as a Model Road. An airstrip for small aircraft is also coming up at Nileswaram; some 24 kilometers from the Fort. All the more reasons for you’ll to come here.

Q. Is Bekal worth visiting?

A – A. Bekal is a great place for a vacation as it has all the necessary elements such as stunning panoramic sights, interesting tourist places, luxurious accommodations, and a cozy weather making it a great place to find peace, tranquility, and romance.

Q. How far is Bekal from Mangalore?

A – 65 Kms is the Distance Between Mangalore to Bekal

Q. How can I go to Bekal from Mumbai?

A – On the other hand, bekal fort remains open for visits on the following open days of the week – Mon, Tue, Wed, Thu, Fri, Sat and the entrance timings and opening hours on these days are from 08:00 AM – 05:30 PM and then from .

Q. Why was Bekal Fort built?

A – It is believed that the Bekal fort might have existed even from early days of the Chirakkal Rajas for the fact that it was common in those days to build a fort for the purpose of defense. Many of the old royal palaces have forts to protect them from the enemies.

Q. What is the shape of Bekal Fort?

A – Built using laterite slabs and with a polygonal shape, the fort rises 130 feet above sea level and is situated on a headland spanning 35km.

Q. In which district Bekal Fort is situated?

A – Bekal Fort, is the largest fort in Kerala, situated at Bekal, Pallikera village in Hosdurg Taluk in Kasaragod district, Kerala and it is 65 km from Mangalore city spreading over 40 acres.

Q. How many forts are there in Kasaragod?

A – Travelers are voting Bekal Fort, Hosdurg Fort and Chandragiri Fort as the best of 3 forts in Kasaragod. There are 2 forts in Kannur a city just 97 km from Kasaragod and 2 forts in Horanadu which is 186 km distant. The most popular of these are Tellicherry Fort in Kannur and Jamalabad in Horanadu.