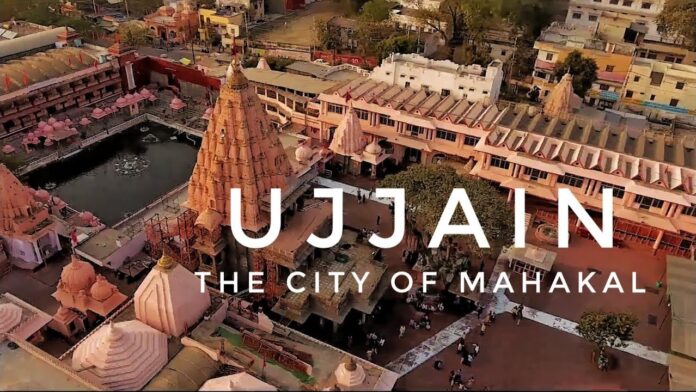 Along with Mandu and Omkareshwar, Ujjain forms part of the Golden Triangle in the Malwar Region of Madhya Pradesh. This holy city in the state’s southwest is regarded as one of the seven holiest cities in India, making it one of the most popular Hindu pilgrimage destinations. Ujjain is particularly associated with Lord Shiva in the fierce form of Lord Mahakal, the destroyer of all elements, who protect the city.

The existence of Ujjain as an urban center can be traced all the way back to about 700 BC when it was known as Avantika, the capital of the Avanti kingdom, as mentioned in the Hindu epic The Mahabharata. This flourishing kingdom was on the trade route between north and south India. The city was taken over by the first Mauryan emperor Chandragupta in the 4th century BC and remained important.

Ujjain has also featured in both ancient and modern literature. The great 5th century Indian classical Sanskrit poet Mahakavi Kalidasa, who was a court poet of the Gupta Empire, described the city in his work “Meghaduta.” More recently, celebrated novelist E.M. Forster traveled through the area in the early 20th century and wrote about it.

Visiting temples is one of the top things to do in Ujjain. However, there are plenty of other attractions for those who aren’t religious. The city’s Old Town, to the north of the railway station, is most atmospheric.

Hindu scriptures say that Ujjain is one of four holy places where drops of Amrit (the nectar of immortality) fell during a legendary fight between gods and demons, known as Samudra Manthan. The Kumbh Mela festival is held at each of these places (the others are Haridwar in Uttarakhand, Allahabad in Uttar Pradesh, and Nashik in Maharashtra) once every 12 years. The festival at Ujjain is called the Simhastha Kumbh Mela due to the certain configuration of planets, and the next one will happen in 2028. Attending is not for the faint of heart though! It’s the largest religious gathering in the world, and it attracts millions of pilgrims and sadhus (Hindu holy men) every day. They come grand in procession to cleanse their sins by taking a dip in the Shipra River and give discourses to curious spiritual seekers.

Ujjain is a city of temples and each one has mythological stories associated with it. In fact, there are so many temples it would take at least a couple of days to unhurriedly visit them all. Mahakaleshwar temple, where Lord Shiva resides, is the main temple. Notably, it has a unique ritual where the idol is smeared with sacred ash at the start of each day. Opposite the temple, the huge idol of the beloved elephant-headed god (son of Lord Shiva) at Bada Ganesh Mandir is worth admiring. Across the lake, on the way to Ram Ghat, Harsiddhi Mata temple is another prominent temple in Ujjain where shakti (female energy) worshiped. The temple was restored by the Marathas in the 18th century and its two pillars are beautifully illuminated with hundreds of lamps during the Navaratri festival. To the north of the city, across the Shipra River, devotees give alcohol to Lord Kal Bhairav at his temple as part of a Tantrik ritual. An intimidating manifestation of Lord Shiva, he helps guard the city and is apparently distinctly fond of Royal Stag whiskey. Other top temples include Gopal Mandir in Ujjain’s main market area, Chintaman Ganesh temple, the ISKCON temple, and Mangal Nath Mandir. There’s also a temple at Siddhavat, on the Shipra River, where an old banyan tree is said to have been planted by Goddess Parvati. The Bhartrihari Caves, where philosopher and poet Bhartrihari meditated in the 7th century, contain a small temple too. It’s frequented by ash-smeared Nath sadhus.

Cleanse Your Body and Soul in the River

The Shipra River, also known as the Kshipra River, is one of the holiest rivers in India. There are many stories about it in the “Skanda Purana,” an ancient Hindu text associated with Lord Shiva dating back to around the 6th century. Taking a dip in the river is believed to purify body and soul, despite the stagnant water’s unclean condition. The most celebrated place to do this is Ram Ghat, where Lord Ram is said to have performed his father’s last rites. However, there are other popular bathing ghats along the river.

Observe Local Life by the River

Even if you’re not interested in the religious significance of Ram Ghat, it’s still worth spending some time there to observe daily life. The ghat stretches for about a kilometer (0.6 miles) along the river and it’s possible to stroll from one end to the other. Early mornings are really evocative, when the sun’s rays warm the temples, the clang of temple bells vibrates through the air, and people perform their morning devotional rituals. Find a quiet spot to sit and relax, and the hours will disappear as you soak up the peaceful vibe.

Participate in the Evening Aarti

As the sun sets, Ram Ghat comes alive with the mesmerizing glow of earthen lamps, more clanging of bells, and chanting of mantras. This ritual, known as the Shipra aarti, takes place every evening to honor the river. The lamps are set afloat on the river, to be transported north to Lord Shiva’s abode in the Himalayas. It’s an unforgettable experience that soothes and uplifts with its tangible divine energy. Hire a boat and go out onto the river to get another perspective of it.

Ujjain is also famous for its bhang thandai, although caution is advised. This milk drink is made with cannabis paste and is sold openly in shops there, where Lord Shiva presides. Don’t be surprised, as bhang is a sacred substance in Hindu culture and is closely associated with the god. The Sri Mahakaleshwar Bhang Ghota, on Mahakaleshwar Road near the temple, is more than a century old. It was featured on the popular Indian travel and food show “Highway on my Plate.”

Get Lost in the Lanes of the Old City

Just as much as Ujjain is a city of temples, it’s also a city of alleyways. A tangle of slender lanes snakes their way from the railway station down to the river bank. Some are so narrow that cars can’t pass through but they’re ideal to explore on foot. Those around Gopal Mandir, in the heart of the Old City, are perfect for getting lost in. They won’t feature in guidebooks and may appear unremarkable but they’re an integral part of the city’s fabric. You never know what will unfold beyond each corner. Besides wandering along Ram Ghat, this is one of the best things you can do to get an authentic feel for the city!

A bargain at the Bazaars

The colorful bazaars of Ujjain also reflect the city’s charm. You’ll find them in the streets north of the railway station, with the area around Gopal Mandir being the busiest. Amid the melee of vendors, vehicles and people there are all kinds of goods for sale ranging from copper statues to clothing. Textiles are plentiful and many shops are stocked with irresistible batik-printed cotton cloth, a local specialty known as dabu.

If you’re fond of Indian textiles, a trip to a nearby Behrugarh (also called Bhairogarh) village where the batik printing is done is recommended. This village is situated on the northern outskirts of Ujjain between Kal Bhairav and Mangal Nath temples. It’s been the hub of batik in Madhya Pradesh for hundreds of years since craftsmen from Rajasthan and Gujarat migrated there during the Mughal era. These days, the village has about 800 artisans involved in traditional batik printing. It’s carried out on sheets, saris, cushion covers, scarves, handkerchiefs, napkins, and more!

Admire the Architecture of Kaliyadeh Palace

Continue a few kilometers north of Behrugarh and you’ll reach the ruins of the 15th-century red sandstone Kaliyadeh Palace. It was built on the Shipra River during the reign of the Sultan of Malwa, Mahmud Khilji, and has superb domed Persian architecture. With a bit of imagination, you can picture what Ujjain might have been like during this prosperous period when the sultans went on a palace building spree in the region. Inscriptions in one of the long corridors of Kaliyadeh Palace indicate that it was visited by influential Mughal emperors Akbar and Jehangir. The palace was damaged in a war between the Marathas and Pindaris in 1818 and was neglected until 1920 when Maharaja Sir Madho Rao Scindia of Gwalior restored it. It’s abandoned now, and visitors can walk through its arches and view the sun temple there.

Q. Are all these places well-connected with the transport system?

A. Yes, all these places have airports, railway stations, and bus stand. They are also well-connected to all the major cities by all the three means.

Q. How are the accommodation facilities in Ujjain?

A. Ujjain is one of the most famous pilgrim centers; hence, one need not worry about the accommodation facilities when they are here.

Q. Is it essential to book accommodation before visiting Ujjain during Kumbh Mela?

A. Yes, since a lot of people from far and wide come to witness this massive extravaganza, it is pretty essential to book the accommodation well in advance.

Q. Is it essential to book tickets before visiting Ujjain during Kumbh Mela?

A. Of course, the ticket price would be skyrocketing as this is one of the most awaited fairs by a lot of people. Hence, booking tickets well in advance would be highly recommended.

Q. Is Ujjain a safe city?

A. Of course, every city is safe provided you are careful enough