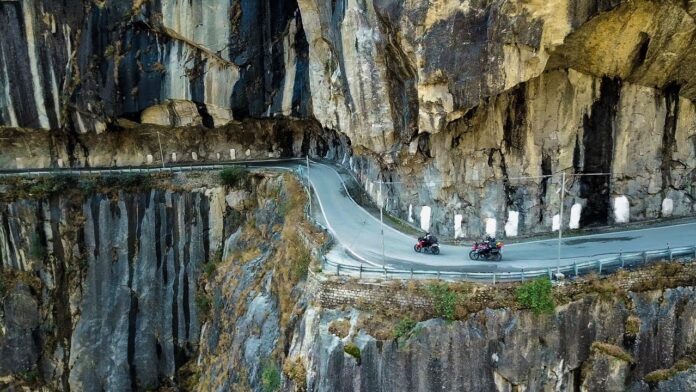 Roads and highways get a boost of INR 97,000 crore, the Honorable Finance Minister Arun Jaitley announced as he presented the Budget 2016. In many cases of deaths on current roads in dilapidated condition and on narrow roads with hairpin curves, we need better roads and highways. Talking about the scariest roads in India, some routes are so bad that they can cause even the most crashed drivers to get cold. Narrow roads, sharp turns, low hanging rocks, and harsh climatic conditions may lead them to the bed of death rather than a planned destination.

Apart from poor maintenance, sometimes the very location of a road makes it a scary drive. Among many, we have brought to you the list of India’s most dreaded roads, which have claimed many lives in the past. But still, some courageous men may see an element of thrill in such drives. Keep an eye on and decide which side you are on!

Where: Ladakh, on the caravan route which was once the silk route between India and China
What it is scary: The road is scary for the sheer unstoppable height of 5,602 meters above sea level. Additionally, the road is not paved and slippery due to a mixture of frozen snow and dirt. And then there are hairpin turns that are also the nightmares of the most experienced drivers in the area.

Where: East end of Kishtwar district of Jammu
What is scary: The road is a winding, narrow and unpaved rail for about 150 meters. The overhanging cliff is so low that a Tata Sumo or similar car will barely fit. Sharp turns with Cliff interrupt the scene, making those turns more difficult to make. A fault and drop are about 600 meters.

3. Killar – Kishtwar Route: A replica of the Kishtwar Kailash Highway

Where: Pangi Valley, Himachal Pradesh
What makes it scary: Much like its twin road – the Kishtwar Kailash Highway – the road runs without rail, has hills and sharp turns, and is narrow. The road is not an easy drive even in daylight, let alone walk at night.

Where: 9 km between Sonmarg to Ladakh and Kashmir
What is scary: At 3,538 meters above sea level, the road is frighteningly narrow and extremely slippery due to a year-round mix of snow and dirt. It gets mud during rain and gets blocked during storms. In addition, frequent landslides have made it one of the scariest roads in India.

Where: Between Pangong Lake and Leh in the Ladakh region
What is scary: At more than 5,360 meters above sea level, the road remains snow-covered all year round. This makes the road slippery. Also, one can feel the lack of oxygen on this road. The low temperature in the region increases the travel of commuters via this third highest motorable road in the world.

Where: NH 22 at the beginning of Kinnaur region
What scares it: Taranda Dhanak is infamous for claiming many lives. Low overhanging rocks, narrow deep holes, and blind turns make this road extremely deadly. One mistake, and the vehicle will fall into the BSP river. If not falls, the collision of vehicles around blind turns is actually fatal.

Previous article
Cafes in Chennai: 10 Most Instagram-Worthy
Next article
Street Food in Pune, Must Eat