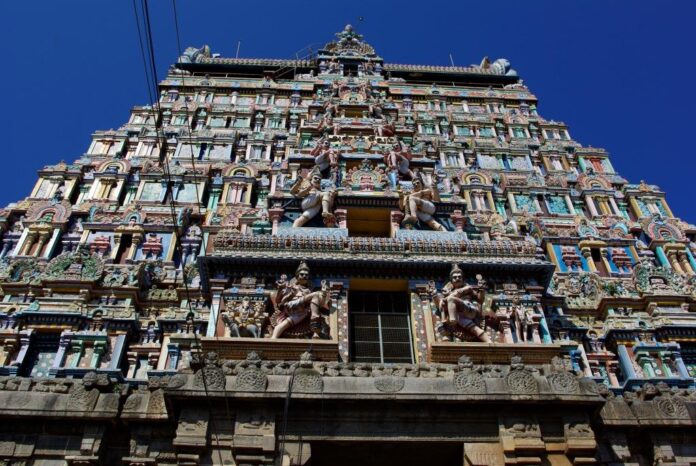 Nataraja Temple : This temple dedicated to Lord Shiva is called Natarajar, one of the five synagogues [divine stages] where Lord Shiva performed a cosmic dance. The traditional name of the temple is Tilai Nataraja-Kootan Kovil. Chidambaram is a pancha booti pillar representing Akasham [Akash], one of the five elements of nature. The other four are Thiruvanaikoil [water]. Kanchi Ekambeswarar [Prithvi], Tiruvannamalai [Agni] and Kalahsthi [Vayu].

It is believed that the revered clan of traditional Vishwakarma was the chief architect of the renovation of the temple, Vidhelvidugu Perumtaken Temple. The temple has 9 gates, four majestic 7 sharp towers and Sikram covered with gold plates. The architecture of this temple is unique and is dedicated to the art of Bharata Natyam, the classical dance form of the state of Tamil Nadu.

Lord Shiva Nataraja and Lord Govindaraja Perumal sit opposite each other in a compound, emphasizing the concept of Shiva-Vishnu is a special feature of this temple. It is also believed that the divine dance competition of Shiva – Parvati took place in the presence of Lord Vishnu. Lord Nataraja is enshrined in the Chitra Sabha, the sanctum sanctorum. Akasa Lingam is called Chidambara Rahasim [Secret of Chidambaram] behind the screen. Goddess Sivakama Sundari is seated to the left of Nataraja. The five silver steps above the sanctum sanctorum are revered as the Pantchatchara Mantram Na Ma Si Va Ya [Namasvivaya].

Chandramouleshwar, Swarnakarna Bhairav, Mukhalingam’s sthani lingam is also inside the sanctum sanctorum. Kanha Sabha, to worship; Deva Sabha was meant to commemorate important festivals; And the Raja Sabha measured 103 meters by 58 meters, a 1000-pillared hall where Sekizhar considered the recitation of Periya Puranam. It is believed that Lord Shiva performed a cosmic dance to please Patanjali and Vyasapada to please the sage [Anand Natam].

This temple has the form of worship 6 times daily. Before each puja, the abode is performed for the endemic lingam [crystal lingam]. During the second puja only around 10 pm, a special abhishekam is performed exclusively – with the spatial lingam – a foot replica of the Natavarar, beautifully rubbed by the Ruby Sabarajathi, better known as Ratna Sababathi. – Made from Ruby. The peculiarity of this Ruby Natarajar is that, when the harthi [Deepam / Prakash] is shown from the front, it is dark.

Whereas, when Harathi [Deepam / Prakash] is shown from behind the replica, it displays a wonderful and terrifying exhibition of workmanship and devotees, witness to this spectacle, completely immersed in Natarakar’s baggage. . Anni Thirumanjanam, Arudhra Darshan [December] – Two annual Brahmotsavams, Natyanjali are the important festivals of this temple.

Many legends are associated with the Chidambaram Nataraja Temple. A couple of annual celebrations and traditions are celebrated with utmost grandeur and pomp.

Nataraja Temple | How to Reach

Below are the articles for the History lovers –

Q. What is the specialty of Chidambaram temple?

A – Chidambaram Temple Complex is proudly one of the oldest temple complexes in Southern India. The most unique feature of the Nataraja temple is the bejeweled image of Nataraja. The temple has five main halls or synagogues, namely Kanaka Sabha, Sabha, Nrita Sabha, Dev Sabha and Raja Sabha.

Q. Why is Chidambaram temple famous?

A – The temple is one of the five fundamental lingas in the pilgrimage tradition of Shaivism, and is considered a subset of all Shiva temples (kovils) of Hinduism. It is also a site for the performing arts, including the annual Natanjali Dance Festival on Maha Shivaratri.

Q. Is Chidambaram the center of the earth?

A – After 8 years of research, Western scientists have proved that in Chidambaram, the temple of Lord Nataraja, in Tamil Nadu, the big leg is the focal point of the world’s magnetic equator. This has been proved by our ancient Tamil scholar Thirumoolaar about five thousand years ago!

Q. Why is Shiva standing on a baby?

A – Shiva is shown in the pose in his Nataraja form, standing on the body. It is not the body of the infant, but the demon called Apsara. Nataraja Roop is the cosmic dance of Shiva. The dance is also called the holocaust, the dissolution of whatever exists merges into it / energy.

Q. Nataraja temple is the center of the earth?

A – Planets are seen as the center of the planet’s aquatic sign. After 8 years of research and development, Western scientists have proved that the focal point of Lord Nataraja’s big toe is the world’s magnetic equator. Our ancient Tamil scholar Thirumoolar proves this to be five thousand. Many years ago!

Q. How old is Nataraj?

A – It is believed to be the earliest known Hindu sculpture (PDF), and dates from around 2 century BCE, and is probably the first to feature the dwarf apsara. Nataraja: Dance as part of a divine ritual may have its basis in the Indus Valley.

Q. Was the Chidambaram temple a Vishnu temple?

A – The Govindaraja Perumal Temple or Tiruchitrakudam in Chidambaram, South Indian state of Tamil Nadu, is dedicated to the Hindu god Vishnu. The temple is inside the complex of Thillai Nataraja temple built in Tamil architecture.

Q. Who built the Nataraja temple?

A – The walls and the eastern gopura (entrance gate) can be engraved with greater certainty, and were probably built by Kulottunga III, who ruled from 1178 to 1218 CE. The Nataraja temple was built between c. 1175 and c. 1200 CE.

Q. Who is Lord Nataraja?

A. – Nataraja, (Sanskrit: “lord of the dance”) Hindu god Shiva as his cosmic dancer, representing metal or stone in many Shaivite temples, especially in South India.

Q. Is it bad to keep Nataraja’s idol at home?