Minaret of Jam : The Discovery And Facts 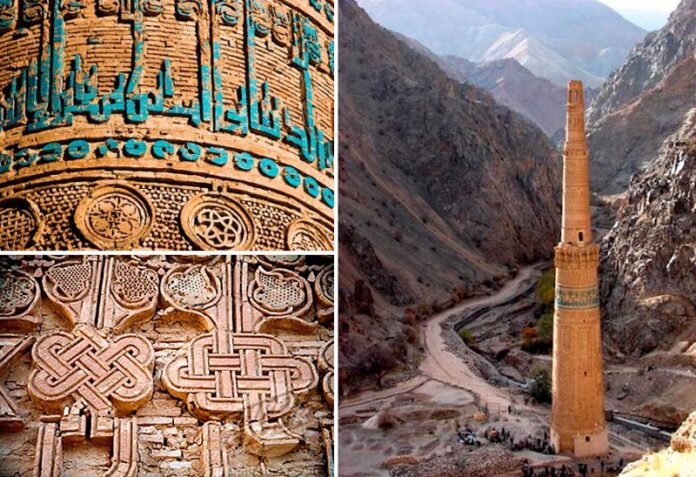 Minaret of Jam is located in the Shahrak district of Ghur province in Afghanistan. It is situated at the intersection of Jam River and Hari River. Standing in a deserted valley, the tower is surrounded by barren mountains.

Built in 1194 AD, the minaret is the only surviving monument of the 12th century Ghurid kingdom. It is 64 meters (213 ft) high, the second tallest ancient tower in the world. The tower of Jam is believed to have marked the city of Firozkuh, an ancient capital. Some ruins of the city still exist, such as walls, tunnels and rocks with Hebrew inscriptions. The city, also known as Turquoise Mountain, is believed to have been a major center of commerce.

The minaret is covered in geometric decoration and, in part, with beautiful turquoise tiles. Walking through the tower is a double spiral staircase. The amazing architecture is the main reason for the existence of the minaret in the list of UNESCO World Heritage Sites. It is an outstanding example of Islamic architecture and ornamentation in the region and has played an important role for further dissemination (UNESCO 2016). An example of this is the world’s only tall ancient minaret, the Qutub Minar in Delhi, which was directly based on Jam’s minaret.

The discovery and the consolidation projects

According to an article in Rory Stuart, The New York Times, the tower was first seen by a foreigner in 1957. What is certain is that in 1961, the Italian architect Andrea Bruno conducted the first survey of the tower. In the early 1960s, the first efforts were made to strengthen the Leaning Tower, and a temporary dam was built to prevent flooding.

In the 1970s, additional surveys were carried out: their purpose was to determine the degree of inclination of the minaret. A first project for the consolidation of the minaret was again proposed by Andrea Bruno in 1978. The Russian invasion of Afghanistan the following year halted the project. It was only with the beginning of the new millennium that consolidation measures were taken. The base was strengthened and the bed of the river flowing next to the minaret was cleared.

Emergency consolidation was completed in 2005. The 2007 report underscores that more consolidation works are needed for the maintenance of the tower: the base needs to be further strengthened and the tower needs to be better protected from potential flooding.

However, the new BBC article states that “there is not enough money to protect it and more floods could bring it down”.

The importance of the minaret

The 65 meter high Minaret of Jam is an exceptional example of Islamic architecture. The diameter of its base is only 8 meters: a small base for a building so tall…

It was built during the second half of the 12th century: sources differ in reporting the construction date. A 2007 report states that it was built in 1165, Sördel-Thomin in 1175 and Pindar-Wilsen in 1195, giving different readings of the foundation inscription at the base of the tower.

What we do know is that the building was built by the Ghurid ruler Ghiyath al-Din. If the text read by Sördel-Thomin is accepted, it is likely that it was composed to commemorate his conquest of Ghazna, 1173.

While defining the function of the building Rory Stuart is far from the “mystery” described in his article, it is quite clear that the tower is actually a minaret. It is true that minarets are usually built within a mosque, or at least a religious building adjacent to them, but it is also true that in Iran, Transoxiana and the eastern region of Dar al-Islam, the minarets themselves stand Can structures.

From an analysis of the situation, inscriptions and etymology used his name, minarets in the area were also used to indicate that the surrounding area belonged to Dar al-Islam. The statement was directed not only towards the non-Muslim population who lived in confined areas, but also towards all those who traveled in the country for commercial purposes. For example, minarets can also serve as road signs on pilgrimage routes.

It is not the case that in the archaeological excavations around the building, grand ceramics were found: this suggests that luxury items were imported on a large scale to the region. In addition, these discoveries, together with the scattered remains of settlements in the surrounding area, may indicate the presence of a prosperous city around the minaret: it has been assumed that this may have been the Ghurid capital, Firozkuh, which was founded in 1222. was destroyed by Genghis Khan.

Together with that, the minaret was erected in a buffer zone against the expansion of the Seljuks westwards.

The Minaret of Jam is surprisingly interesting mostly because of its integrity: both the minaret and the surrounding landscape have hardly been touched since the tower’s construction. Thus, both the architecture and the surface decoration are original and give us a great perspective of the style of the period.

As for decoration, this is achieved through the use of bricks and high-relief terracotta which are fused into geometric patterns on the surface. This juxtaposition creates a play of light and shadow on the surface. The bricks are plain: only an inscription around the shaft is painted with turquoise tiles.

The minaret’s surface decoration represents a continuation and apogee of the typical decorative technique of this part of Dar al-Islam, first seen in the Ismaili tomb in Bukhara (914–943), and further developed during the 10th century. it was done.

Q. Who built the Jam Minar?

Q. What is special about Jam Ki Minar?

A – The 65 m (213 ft) or 62 m (203 ft) high minaret was built around 1190 from fully baked bricks and is famous for its intricate brick, plaster and glazed tile decoration, including Kufic and Naskhi calligraphy. Contains alternate bands of. , geometric patterns, and verses from the Qur’an.

A – The tower of Jam is believed to have marked the city of Firozkuh, an ancient capital. Some ruins of the city still exist, such as walls, tunnels and rocks with Hebrew inscriptions. The city, also known as Turquoise Mountain, is believed to have been a major center of commerce.

A – The minaret, a feature of Islamic architecture that provides a convenient place to pray, is located at the confluence of the Jam Rud and Hari Rud rivers in the Ghur province of central Afghanistan.

A – The only way to get to the minaret is by road, and there is a very rough road leading west from Bamiyan.