Lucknow – The 10 Best Things to Do 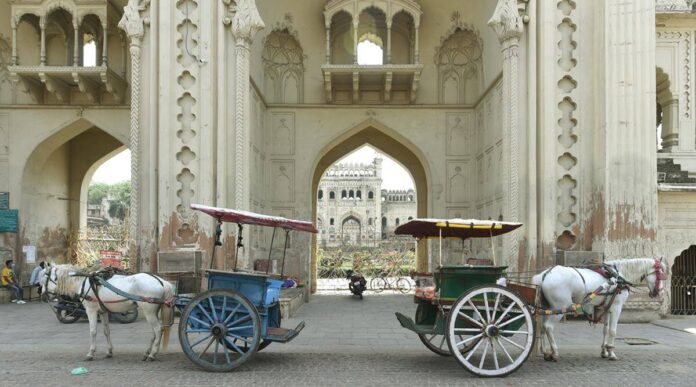 Despite being the capital of Uttar Pradesh, Lucknow is an underrated tourist destination that is still off-the-beaten-track. Nevertheless, some of the most important events in the history of India took place there. In 1856, when the British captured the city, it was ruled by the Nawabs (nobility) of Awadh. These Shia Muslims came from Persia in the early 18th century and gained control of the region at the fall of the Mughal Empire.

The locals strongly opposed the British presence, especially after the British drove the last Nawab Wajid Ali Shah to Calcutta. When the First War of Indian Independence (also known as the Indian Mutiny and Sepoy Mutiny) began in 1857, he was eager to join. This culminated in an intense five-month siege at the Residency Building, which was occupied by the British. Although the rebels were successful in driving out the British, the British fought brutally and reconquered the region 18 months later.

While lovers of history and architecture will be delighted with Lucknow, the city is also famous for its cuisine, arts and crafts.

Go on the Lucknow Heritage Walk

Uttar Pradesh Tourism organizes an affordable Guided Heritage Walk, which is highly recommended to get acquainted with the old city of Lucknow and the major monuments of the Nawabi era. This well-planned walk includes the Mound Wali Masjid, the historic Bara Imambara, Gol Darwaza and Akbari Darwaza Gate, the vibrant street of Chowk Bazaar and the Phool Wali Gali (Flower Street). It also provides an opportunity to immerse yourself in the local life and culture.

You will be encouraged to interact and hear their stories from people you meet in the market area. Walks run daily from 7:30 a.m. to 10 a.m. from April to September and from 8 a.m. to 10:30 a.m. from October to March. The cost for foreigners is Rs 330 per person. Tornos Chowk also offers an excellent personal walking tour of the market area.

Reimagine the Rein of the Nawabs

The second guided tour of Uttar Pradesh Tourism focuses on the Kaiserbagh palace complex, which was completed by Nawab Wajid Ali Shah in 1850. Unfortunately, much of it was destroyed by the British after the failed rebellion in 1858. It is said to have been the most spectacular. The palaces of Awadh are dotted with beautifully designed gardens, bazaars, mosques, audience halls and lavish living quarters. A little imagination and a good guide will give you an idea of ​​what it was like to be there.

An alternative option for exploring Kaiserbagh is the Wajid Ali Shah Walk operated by Tornos. It also includes the Chai of Kotwara House, which is part of the palace complex and is now the home of filmmaker Muzaffar Ali.

The British Residency Building was the stage of a dramatic 19th-century battle at Lucknow, and now bears the siege. During the fighting the building turned into ruins and thousands of people lost their lives. Cannonballs and bullet marks puncture its walls. A newly restored museum on campus (closed Fridays) provides information about the battle. The entry ticket costs Rs 300 for foreigners and Rs 25 for Indians. A cemetery around the ruins of St. Mary’s Church is another attraction.

The bodies of those killed in the rebellion (including Sir Henry Lawrence, who led the defence) are buried there. History buffs may want to take this informative residency renovated tour and/or Lucknow Uprising Tour.

Stay in a Restored Heritage Mansion

Relive a bygone era and its architectural splendor at Lebua Lucknow – a beautiful 1936 art deco mansion that was recently restored and opened as a boutique heritage hotel. The hotel, which is probably the coolest hotel in town, certainly shows that heritage doesn’t need to be hidden. It attracts trendy young couples and families on vacation and, it is conveniently close to heritage sites like Bada Imambara and Residency.

Apart from this, it has an iconic classic yellow Ambassador car for the sightseeing of the guests. The renovation was a passionate labor of love for the husband and wife owners, who saved the property from disgrace. There are 41 guest rooms, two restaurants (one serves authentic Awadhi cuisine), lounge bar, rooftop bar, fitness center and swimming pool. Expect to pay around 7,500 rupees per night for a double room.

The distinctive Awadhi cuisine of Lucknow is widely influenced by Mughal cooking techniques. However, it is the “dum” style of cooking on a slow fire that the city is famous for. Among the dishes are richly spicy dishes such as biryani, kebabs, keema (minced meat), and nihari (meat stew). Mutton – beware it is goat, not sheep – is used extensively. Vegetarians don’t have to worry about starving though, as there are dishes without meat.

If you are an adventurous eater, you will find plenty of local delicacies on the streets of Aminabad market. The hugely popular Tunde Kababy has been doing business there for over a century. Find out about restaurants in Aminabad on the Food Trail operated by Lucknow Magic. The specialist Culinary Walk and Beyond the Kebab Walk offered by Tornos are also excellent. For a truly memorable time, you can even dine with royalty and sample their secret family recipes!

If you think Lucknowi food is delicious and you want to learn how to make it yourself, a cooking class will help you understand the intricacies of the cuisine and give you some practical involvement. Tornos offers three very different types of classes. A 2- to 3-hour session in a private kitchen with a local family focuses on the nuances of a single dish that is easy to replicate back home.

Those who want to see a complete meal being prepared will appreciate the experiential dining experience that takes place with the chef at Tornos Artisan Kitchen called Coquina. Or, for something really different, experience village cuisine. You will be taken to a nearby village to observe and taste traditional cooking over a wood fire.

Quench your appetite, or walk hungry, at the sprawling and trendy Ambedkar Memorial Park. The park was built with marble and red sandstone from Rajasthan in the memory of Dr. Bhimrao Ambedkar, who drafted the Indian Constitution. It houses a museum with over 50 large stone elephants, a bronze statue of Ambedkar, murals and statues of other social reformers.

The best time to visit is just before sunset. Plan to spend at least an hour there and stop by in the evening to watch it illuminate beautifully. There is an entry fee of Rs 10.

Enjoy a Sundowner With Spectacular Views

Lucknow’s tallest bar, Sky Bar, is located on the 16th floor of the stylish Renaissance Hotel, overlooking the Ambedkar Memorial Park and the city of Gomti Nagar. The bar is a contemporary space with open-air seating, pool, creative cocktails and appetizers. It is open daily from noon to midnight. On Friday and Saturday nights there is a party atmosphere with music.

Are you a fan of Cliff Richard? If so, don’t miss to pose in front of his mural. It was featured in early 2018 as part of a city beautification project featuring six notable individuals born in Lucknow. The project was started as a collaboration between Lucknow Development Authority, Delhi Street Art and Colorothon (a platform that encourages people to come together and draw or paint). You will find the mural painting on the side of Shaheed Path flyover near Indira Gandhi Pratishthan in Gomti Nagar.

Check Out the Craft Workshops

Apart from its cuisine, Lucknow is also famous for its delicate floral chikan kadhai. It is mostly visible on sarees and at the neckline of kurtas (a loose collarless shirt). The best place to see this and other crafts is in the crowded Square Market area of ​​the old city, where many workshops are closed. Lines of shops stock embroidered garments for all age groups.

A market walk organized by Lucknow Magic includes a visit to the Chicken Workshop as well as the Silver Foil and Block Printing Workshop. If you’re really interested in chikan embroidery, you can even take a half-day course in a designer’s studio.

Read More About Places to visit in India

Q. What is Lucknow famous for?

A – Lucknow is a historically important city and has been at the center of North Indian culture for many centuries. In particular, the city was famous for its adab and tehzeeb (courtesy and hospitality), intricate embroidery, beautiful gardens and dance forms such as Kathak.

Q. What is the specialty of Lucknow?

A – The city is quite famous for its traditional chikan embroidery work, which attracts travelers from all over the country. Places to shop in Lucknow include the city’s markets, their narrow old lanes and countless shops, where shopping has its own charm.

Q. Which fruit is famous for Lucknow?

A – The city of Lucknow is home to its world famous Dussehri variety of mangoes. The townspeople share a particular fondness for mangoes, but other fruits such as lychees, guavas, papayas, bananas, oranges and melons also find a place in town homes.

A – “Lucknow” is the English spelling of the local pronunciation “Lucknow”. According to a legend, the city is named after Lakshmana, the hero of the Hindu epic Ramayana. … This settlement came to be known as Lakhanpur (or Lachmanpur) till the 11th century and later as Lucknow.

Q. Is Lucknow worth visiting?

A – Attracting tourists from all over the world, Lucknow is one of the most visited cities in the country. Though travelers come here mainly for the famous Lucknowi delicacies like Kebabs and Biryani, there are many places of interest that are worth visiting.

Q. Is Lucknow safe for tourists?

A – Yes you can, Lucknow is as safe as any other city, just take some basic precautions that are applicable to any new place. Visit and enjoy the city of Nawabs and Kebabs. Lucknow is a very beautiful old city.

Q. What is Lucknow known for?

A – The city is quite famous for its traditional chikan embroidery work, which attracts travelers from all over the country. Places to shop in Lucknow include the city’s markets, their narrow old lanes and countless shops, where shopping has its own charm.

Q. For how many days is Lucknow enough?

A – 3 Days, Lucknow, the city of the Nawabs and the capital of Uttar Pradesh is an important center of commerce, design, culture and tourism. The city is located in the middle of the Uttar Pradesh Heritage Arch and is home to the largest urban parks, Janeshwar Mishra Park and Ambedkar Memorial Park.

Previous article
Vaccine Passports – Five things you need to know about
Next article
Dubai Hotels : The 10 Most Luxurious