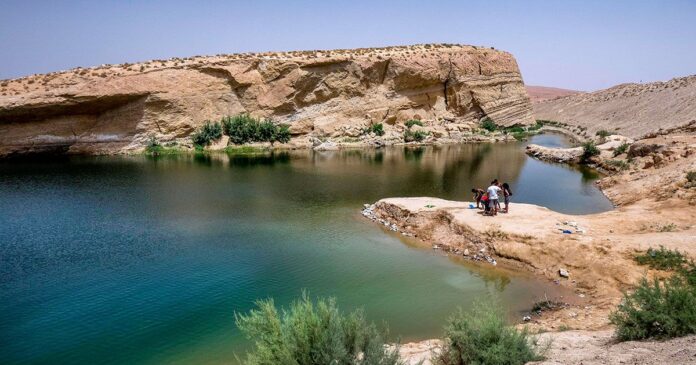 In 2014, a Tunisian, when returning home, suddenly discovered a large lake in the middle of the desert, which had not existed before. It happened almost 25 kilometers from the city of Gafsa. At first, the man thought it was a hallucination, but the lake turned out to be real. It is surprising that it appeared exactly when Tunisia suffered a terrible drought. Rambler will tell you more about the lake, which is popularly called Lac de Gafsa.

There are still many rumors about the origin of the lake. However, the most likely version is that one minor earthquake tore a rock above groundwater, causing millions of cubic meters of water to rise to the surface. And now the lake covers an area of ​​one hectare and reaches a depth of 18 meters.

However, bathing in Lac de Gafsa can be hazardous due to phosphate pollution. The fact is that the Tunisian region is rich in phosphate, which saturates soils and rocks, and this is a very dangerous material. If the lake is polluted, then the water is probably radioactive and carcinogenic.

Already a few days after the appearance of an unusual reservoir, its color changed dramatically due to algal blooms. This is the first sign that the water is not being renewed.

But despite warnings from authorities and scholars, crowds of locals and tourists come to the place to swim and cool off from the unbearable heat of the desert.

The lake appeared like a mirage in the Tunisian desert; One minute there was nothing but scorching sand, the next day a vast expanse of turquoise water.

For locals, the temptation to cool off in the inviting waters, roasting in 40C heat quickly allayed any fears about the mysterious pool.

Hundreds of people, in what quickly became known as Lac de Gafsa or Gafsa Beach, splashed, paddled, dived, and washed off the rocks in the lake, ignoring warnings that the water was contaminated with carcinogenic chemicals. Maybe fraught with disease or possibly radioactive. Even after the water turned dark green, they arrived in large numbers without stopping.

“Some say it is a miracle, while others are calling it a curse,” Tunisian journalist Lakhdar Saud told France 24 television.

Related Article – Sidi Bou Said, Tunisia: All About The City

Previous article
Dodecanese Islands: What to do
Next article
5 countries where you get paid to move