Khardung La – The Highest Motorable Road in The World 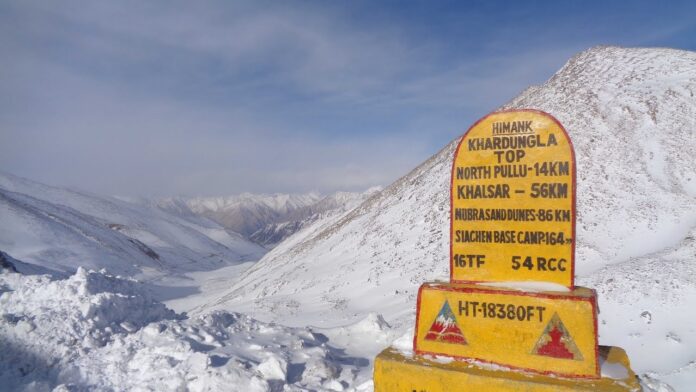 Khardung La Pass is a gateway to some of the most unexplored and enchanting landscapes. This famous mountain route is very popular among adventure seekers and regular tourists. Located in the Leh the Indian Union Territory, Khardung La is situated at an elevation of 5,359 meters. It is set to be the most motorable pass worldwide. Historically speaking, Khardung La is quite important as it is located on the major caravan route that connects Leh to Kashgar in Central Asia.

During the Second World War, attempts were made to move the war well to China via this route. Khardung La was made in the year 1976 and was accessible to public motor vehicles in the year 1988. The route is maintained by the Border Road Organization and is of considerable strategic importance as it is used to carry goods to the Siachen Glacier.

Primarily the months between March-May and September – October are the best for traveling to Mountain Pass. When you can visit Khardung La Pass, here is a breakdown of some other seasons.

The region sees an abundance of sunshine, with temperatures around 21 ° C during summer. Nights are relatively colder than daytime because temperatures drop to 7 ° C or below.

Khardung La is inaccessible during the months of June and August due to continuous rains.

Wintertime is equally challenging as the region receives heavy snowfall, making it impossible for tourists to access the road. Temperatures fall to -30 ° C during winter.

How to Reach Khardung La

Bus service is available daily from Leh to Nubra Valley which passes through Khardung La Pass.

Things To Keep In Mind

Here are some of the important tips that you must keep in mind before visiting Khardung La Pass:

Here is the list of the most important items that you should carry to Khardung La Pass:

Q. What is Khardung La Pass famous for?

A – Famous as the gateway to the Nubra and Shyok valleys in the Ladakh region of Jammu and Kashmir. It is the highest motorable pass in the world. It is packed with tourists coming from Leh and staying long enough to click some pictures.

Q. What is the best time to visit Khardung La Pass?

Q. Where is Khardung La?

A – Perched at an altitude of 18,379 feet, Khardung La is the highest motorable road in the world and serves as the gateway to the Shyok and Nubra valleys in the Ladakh region of Jammu and Kashmir, India’s northernmost state. It is a high mountain pass in the Karakoram range, north of Leh.

Q. Which is the highest pass in the world?

Q. How do you reach Khardung La Pass?