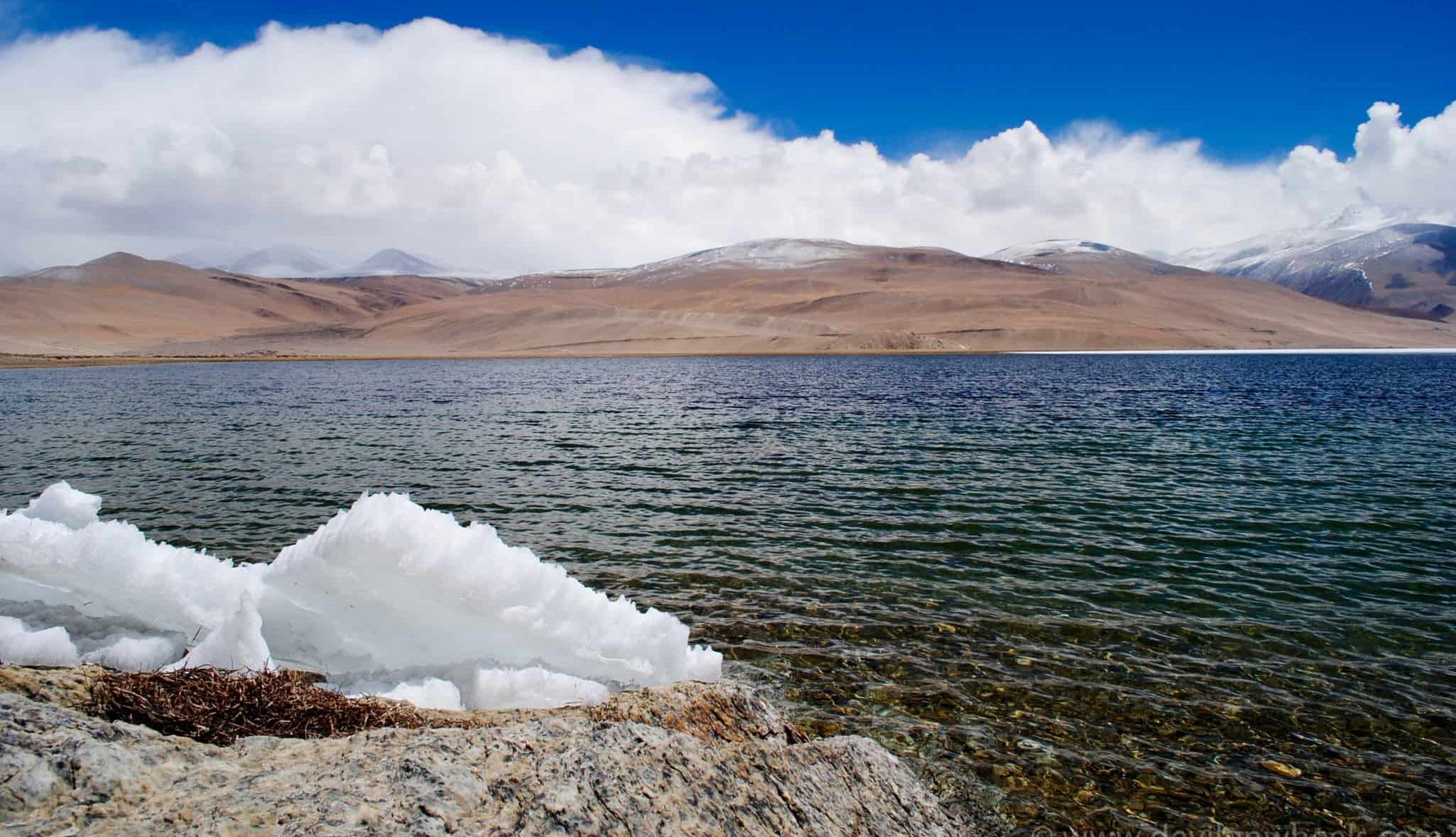 Once you decide to take the high road to Tso Moriri (Tso Moriri – The Mountain Lake) you will almost surely be enveloped by a mixed feeling that’s unique in its own way. Prodded by the excitement of beholding one of the most beautiful high altitude lakes in the world, the existing environmental concern would contrarily restrict your adventurous urges. So there it will be, in full view, and yet you wouldn’t want to tread too close lest you disturb the natural order of this renowned bio-diverse breeding ground of many rare faunal and floral species. But that doesn’t keep Tso Moriri from being one of the most popular trekking jaunts in Leh, as the frequently taken trek from Rumtse through Tso Kar to this brackish lake proves so.

TsoMoriri – The Mountain Lake, The Lake was, until the beginning of the sixties, a unique deposit of salt for the local community who extracted the unrefined mineral for trade and domestic consumption purposes as well. This, however, is no more in practice as the evidently unique ecological diversity has landed it into the list of Ramsar Wetland sites and has been accepted as a wetland reserve under threat of its growing vulnerability at the hands of various destructive factors. Conservation endeavors by various organizations like the State Department of Wildlife, WWF-India, the Wildlife Institute of India, and even the locals are in full swing today, which is quite remarkable because the results are very much there for everyone to witness.

Tso Moriri – The Mountain Lake is a place that can be better enjoyed and explored on foot. Actually, most travelers prefer to trek around, treading on the delicate ground with care, even as conservation activists strive on the need for precaution against surface damage. To get to the lake you need to have a special permit for entry into the village of Korzok, which can be procured from Leh.

Visiting one of the highest villages in the world is hardly the rousing element for travelers, for the real attraction in Korzok is actually a 300-year-old monastery belonging to the Drugpa order known as Korzok Gompa. Offering sanctuary to about 35 monks, Korzok Gompa houses an interesting collection of artifacts, including a statue of Sakyamuni Buddha, several chortens, thangkas, and even restored paintings.

Architecturally, the monastery is not much to mull over, but it does offer a sacred space for some serious introspection for travelers who, weary of the worldly humdrum, seek momentary mortal salvation here.

Portraying an undeniable touch of Tibetan architecture, the monastery has served as the sanctuary of supplicants who have been making their way towards it to dedicate their lives completely to Buddhism. It is here that you will feel more spiritually inclined and experience a makeover that you had never felt before.

When you feast your eyes on a beautiful creation as Tso Moriri, you do not have to be a science scholar to understand what a remnant lake is, but merely be thankful that it is there for the world to behold. Tso Moriri or Lake Moriri, which has donned the mantle of Tsomoriri Wetland Conservation Reserve, owing to the efforts of the conscious locals and WWF-India, is a high altitude lake in the Changthang sub-division of Leh.

Tso Moriri is known to be the only breeding ground of the bar-headed goose in India and the black-necked crane outside China, besides attracting other species like the great crested grebe, brown-headed gull, lynx, the Himalayan marmot, the Tibetan sand fox, Tibetan ass, and the Himalayan blue sheep. An interesting aspect of a visit to this amazing lake is the four/five-day trek from Tso Kar, which is the toast of most adventure travelers-streaked travelers today.

Amazingly, Tso Moriri is one place where you do not need to fear getting ripped off. In spite of the significant influx of tourists to this place, the rate of occupancy is not very impressive as there is just one retreat place in the area. Of course, one can pitch personal tents or settle in the campsite while on their trek to the lake.

Q. What is the distance from tso moriri to leh?

A – Tso Moriri is located about 240 KMs from Leh town of Ladakh.

A – The site is said to represent the only breeding ground outside of China for one of the most endangered cranes, the Black-necked crane.

Q. What is tso moriri temperature ?

A – Summer Season in Tso moriri – Tsomoriri experiences summer from the month of June and last till August. The temperature remains comfortable between 2°C to 30°C and is apt to experience the beauty of the place.

Best Season in Tso moriri -The best season to visit Tsomoriri is the summer season. The temperature remains cool and comfortable and is apt for sightseeing. The best months to visit are June, July and August.

Q. What do we call tso moriri lake in hindi ?

A – TsoMoriri or Lake Moriri or “Mountain Lake”, is a lake in the Changthang Plateau (literally: northern plains) in Ladakh in Northern India

Q. What is tso moriri’s height?

A – TsoMoriri, at a distance of around 250 km from Leh is a high altitude mountain lake at a height of around 4500 m, in Ladakh

A – Below are few stay options available near the lake –

Q. How is tso moriri camp and resorts?

Tsomoriri Camp and Resort TsoMoriri is a deluxe Camp in the charming surroundings of Leh, Ladakh.

Q. How is tso moriri in april?

In April, the lake starts to melt and starts transforming into the beautiful palette of multi shades of blue colors.

Q. What is the difference between tsomoriri and pangong lake?

Q. Do we have leh to tso moriri bus service?

Korzok village is the nearest village to the lake that is set at a distance of a 15-minute walk from its shores. You can buy the ticket for the bus from the Leh bus stand itself. The one-way bus fare from Leh is approximately Rs. 370 per person.