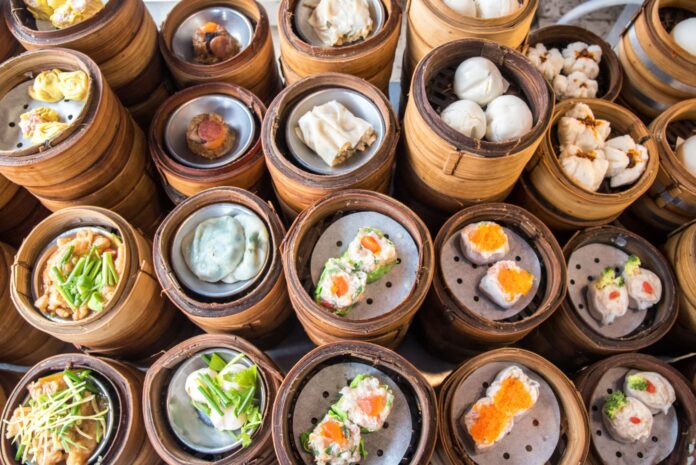 One thing that sets Hong Kong apart from Mainland China and the British colonial rule that ended with its handover in 1997 is its distinctive Cantonese cuisine. Part of the southern Canton (aka Guangdong) province, this energetic metropolis—which is comprised of two sides, Hong Kong Island and Kowloon, plus a handful of small islands—is the mother ship for some of the most recognizable, accessible Chinese dishes you’ll find in the West, in their most authentic form (plus some nouveau and evolved versions!).

Here are 10 must-try Hong Kong culinary specialties, from budget-friendly and traditional in the presentation to their wallet-busting, fine dining incarnations.

Not so much a dish as a whole concept—dozens of small, sharable food items a la tapas, traditionally served off carts that travel throughout the restaurant or teahouse—dim sum is a Hong Kong (and Cantonese) institution. While typically regarded as a breakfast or lunch affair, dim sum is the Hong Kong equivalent of “all-day breakfast” and even can be found on some dinner menus throughout the city. Staples include saucy braised chicken feet (a.k.a. Phoenix Claws), shrimp dumplings with translucent rice flour skins, soup dumplings (xiao long bao), egg custard buns, and steamed, fluffy brown sugar cake (ma lai go).

Assortments of succulent roast meat known as siu mei, from crisp pork belly to goose, can often be spotted in Hong Kong restaurants and street food stalls dangling from hooks and skewers. One of the most treasured is char siu: barbecued, caramelized pork that gets its red-amber color and sweet flavor from marinating in a mix of five-spice, blend of sauces, garlic, and more. Chopped into slices and served over rice, it’s ubiquitous comfort food, yet Mott 32 upgrades the char siu experience and deliciousness with primo Iberico Pork and yellow mountain honey. Also, try this delight in its conveniently hand-held, fluffy steamed bun incarnation, char siu bao.

A whole different animal—literally!—then Beijing duck, Cantonese roast goose is one of Hong Kong’s most addictive, meatiest staples. Tender and toothsome with a perfect blend of leanness and fatty richness, the perfect roast goose should lack gaminess and boast a smoky, earthy flavor. For over 60 years, the Michelin-starred yet completely unassuming Yat Lok (which Anthony Bourdain stanned for) serves its perfect goose with either rice or noodles and broth, while the nearly 80-year-old Yung Kee uses a charcoal oven for a magic touch, while you can also partake of their famed Century Egg.

As a Hong Kong equivalent to Jewish matzoh ball soup, this comforting grandma’s cure-all is slurpable and comforting (and bears little semblance to Western Chinese restaurants’ “wonton soup”). Usually, it entails springy thin egg noodles and goldfish-like folded pouches containing pork, shrimp, or both, in a clear broth (flounder is a not-so-secret ingredient in some of the best bowls) with a complement of slivered green onion. Causeway Bay’s Michelin star-awarded Ho Hung Kee is a long-running favorite, while Central’s Tsim Chai Kee offers plump King Prawn wontons and a spicy option. Just making a connection at Hong Kong International Airport? There’s a Ho Hung Kee location here, and the wonton noodle at Cathay Pacific’s business and first-class lounges are both complimentary and delicious!

Bo jai fan in Cantonese, and self-descriptive, Clay Pot Rice can be topped with a variety of meat and veggies that flavor the rice underneath, while its crusty bottom layer—traditionally formed from the pot being cooked in charcoal-heated ovens—is especially toothsome and beloved. Kwan Kee is a Michelin Bib Gourmand holder thanks to its “chewy and fragrant” three-rice blend and varieties including white eel and beef and egg with Chinese sausage, while the comparatively sprawling Casserole Buddies (in Tseung Kwan O) offers fusion twists like Hainanese Chicken Rice and Black Truffle Chicken.

Like a roast duck, chicken, and goose, the pigeon is found all over Hong Kong, but the red and crispy-skinned fried squab is a fancier, more technique and ingredient-driven version (a la Beijing Duck), and commonly reserved for special occasions including weddings, birthdays and the New Year. You don’t have to wait though! Embracing a strong locavore ethos, Legacy House at Rosewood Hotel serves a top-notch Crispy Fried Pigeon on both a la carte and tasting menus with a stunning harbor view as the background.

Typically spelled shumai in English (and pronounced shoo-my), these small fig-sized, open-topped dumplings are a favorite at Dim Sum and street vendors. While numerous iterations exist around China, Hong Kong’s Cantonese version usually contains pork, shrimp, or mushroom fillings, with a bit of red or orange-hued fish or crab roe on top for color. Fine dining outpost Mott 32 offers a luxurious, addictive Iberico pork with quail egg and black truffle shumai, while Holt’s Cafe at Rosewood Hotel—a gorgeous waterfront 2020 opening—includes a mushroom and pork in its mix of upscaled yet casual HK teahouse favorites and European comforts (like Fish & Chips and BLTs).

Rare is the siu mei without a slab of crackly-skinned, decadently fatty Cantonese roast pork belly (siu yuk) just waiting to be chopped into cubes or rectangles and savored with a dipping sauce. While best known for its roast goose, the Michelin-starred yet casual Kam’s serves an equally delicious, unpretentious siu yuk, and other roast meat. For Instagram-worthy, clean, artfully presented cubes with crunchy yellow-brown tops you’ll dream of for years, get to Mott 32 or the chic, contemporary art-minded Duddell’s.

Milk tea may be synonymous with Hong Kong, yet this sweet combination of both milky tea and coffee served either hot or iced is a tasty, locally popular variation. Also translated as yuan yang, yuan yang, and yuenyeung, its mix of a bite from black tea and roundness from the java makes for a perfect morning or afternoon pick-me-up. Clamored for by tourists and locals alike (you can’t miss the line), the 58-year-old Lan Fong Yuen cha chaan teng is famed for filtering its blend of Assam teas old school style through a silk stocking, and its Yuan Yang is worth the wait (you can do takeaway).

Previous article
Things to Do in Nakhon Phanom, Thailand
Next article
Hidden gems in Ireland’s capital